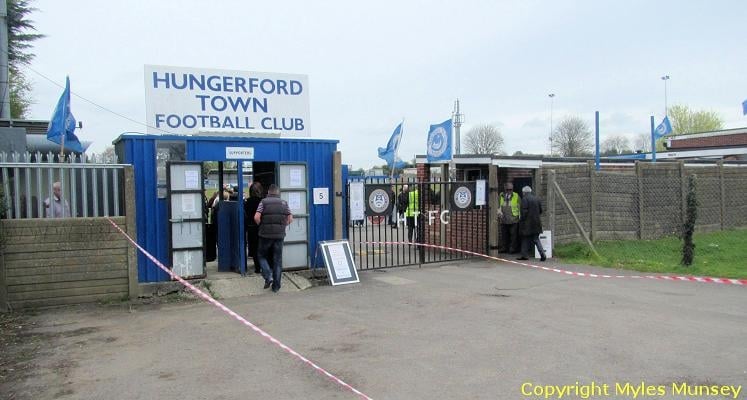 Bulpit Lane has seen some improvements recently with the installation of a covered seated stand at the North End of the ground. This stand which was acquired from Newbury FC contains 210 seats in seven rows. It runs for around a third of the length of the pitch and is situated directly behind the goal. Either side of this stand are newish concreted, slightly raised single steps. It is free of any supporting pillars and is the tallest stand at the ground. It replaced the small Ron Tarry covered terrace. The rest of the ground is a rather disjointed being made up of several small stands plus a number of uncovered standing areas. The ground is small and functional but with few features of note other than the turnstiles and HTFC spelt out on the entrance gates. Nevertheless it occupies a pleasant position in a quiet corner of town next to the town's cricket pitch.

There are two entrance turnstiles in the southwest corner of the ground which once negotiated give access to all parts of the stadium. The end nearest the entrance turnstiles, the Bulpit Lane End, houses the changing rooms and the catering/club bar, the brick buildings of which back on to this end. In front is a small walkway which is used as a flat standing area by fans and has only a small cover. To the left, as you enter is the West Stand. This small covered seated stand sits astride the half way line and has five rows, comprising a total of 124 seats. On either side of the West Stand are flat standing areas, although there is a small covered area towards the North End.

The East side of the ground backs onto the ancient and very delightful Hungerford Common. Here cattle exercise their historic grazing rights and roam freely. This side looks similar to the West having a small covered seated stand with 176 seats straddling the halfway line. There are 7 pillars that get in the way. To the North and South ends of the East side a single one step concrete standing area has been constructed. A new small covered seated stand has been installed to the south of the East (Main) Stand. Although it comprises only four rows containing around 100 seats, it is raised above pitch level, although there are some safety railings in front. The basic-looking team dugouts are located to the front on each side of this stand.

In the North East corner of the ground is a large ugly looking radio mast which overlooks the stadium, whilst in the South East corner there is another smaller but equally as ugly radio mast. Both these have floodlights attached. In the South West corner there is another mast, probably for mobile phones. This has a single floodlight attached, which is rather low down and can be annoying when looking in that direction. The ground has a set of six thin floodlight pylons, four of which run down the West side of the ground, whilst there are two on the other side, flanking the East Stand. To try to combat the noticeable dimness in each goalmouth there are a pair of lights on the roof of the enclosures behind each goal. Despite all these lights, the illumination is not very good. There is also a slight slope to the pitch that runs down from the North to the South End.

With promotion to the dizzy heights of National League South, the ground will I hope receive some extra tlc. befitting of a higher status. The 'small club'  label is no longer appropriate. On match days there is plenty of catering dispensed from the catering hut near the club bar. There is unlikely to be any segregation so expect free and easy access to all parts of the ground.

There is a clubhouse inside the ground which welcomes visiting supporters. The nearest pub to the ground is the Borough Arms on the High Street, which is around a ten minute walk away. More or less across the road from the Borough Arms is a handy fish and chip shop. There are plenty of other pubs and eating establishments dotted further along the High Street. If arriving by train then just outside the station is a Fullers pub called the Railway Tavern. If you have a bit more time on your hands then at the end of the High Street over the river bridge and up on the right is the John O'Gaunt pub, which is listed in the CAMRA Good Beer Guide.

Leave the M4 at junction 14 and take the A338 towards Hungerford. On entering Hungerford you will find a roundabout where you take the second exit towards the Town Centre and Marlborough (A4). At the next roundabout take the first exit continuing towards Marlborough and then at the next roundabout take the first exit towards Town Centre/Salisbury (A338). Continue straight on passing through the town centre and after about one mile turn left at the mini roundabout onto Priory Road (signposted Town Football Club). Then take the third left into Bulpit Lane. After going straight ahead at the crossroads you will reach the ground entrance on your left (by the children's playground). There is little parking available at the ground itself, but there is plenty of on street parking available in the local area.

Hungerford Railway Station is located around three quarters of a mile from Bulpit Lane or around a 15 minute walk. It is served by trains from London Paddington, which operates an hourly service on Saturday afternoons.

On leaving the train station walk up to the Railway Tavern pub. Turn left at the pub and at the top of the hill turn right then first left into Fairview Road. Continue up past Hungerford Primary School and the One Stop shop on your left, then take the second left into Bulpit Lane. The entrance to the ground is a short way down on the left.

The concessions price of £6 also applies to the Disabled, serving members of the Armed Forces or Emergency Services (Valid ID may need to be shown for proof of status).

Hungerford Hotels - Find and Book Yours And Help Support This Website

If you require hotel accommodation in Hungerford then first try a hotel booking service provided by Booking.com. They offer all types of accommodation to suit all tastes and pockets from; Budget Hotels, Traditional Bed & Breakfast establishments to Five Star Hotels and Serviced Apartments. Plus their booking system is straightforward and easy to use. Just input the relevant dates and click on "Search" below or on the hotel of interest on the map to get more information. The map is centered on the football ground. However, you can drag the map around or click on +/- to reveal more hotels in the town centre or further afield.

Map Showing The Location Of Bulpit Lane In Hungerford

Special thanks to Myles Munsey for providing the photos and information about Bulpit Lane Hungerford Town for this page.