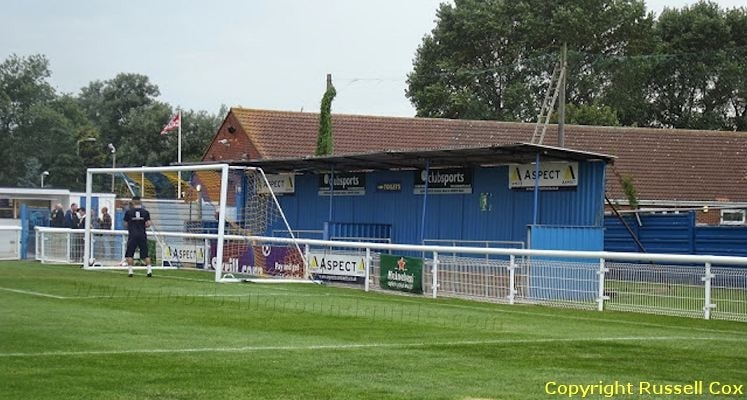 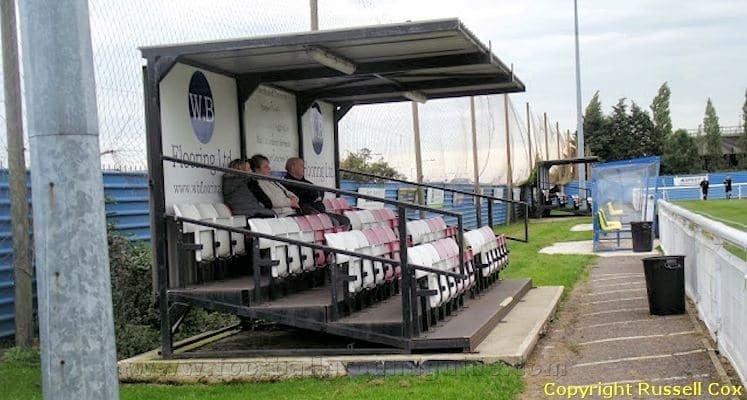 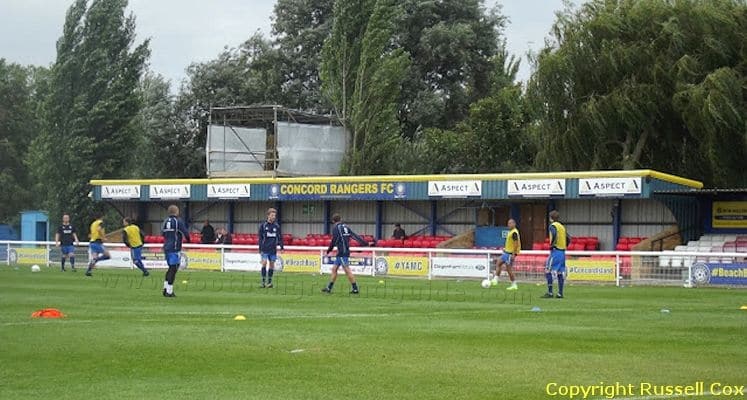 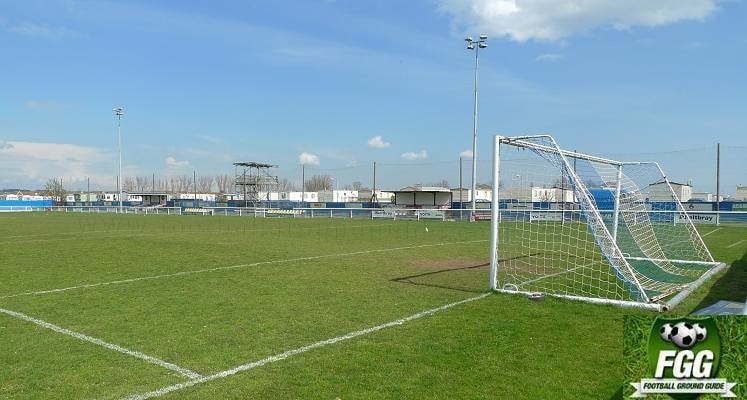 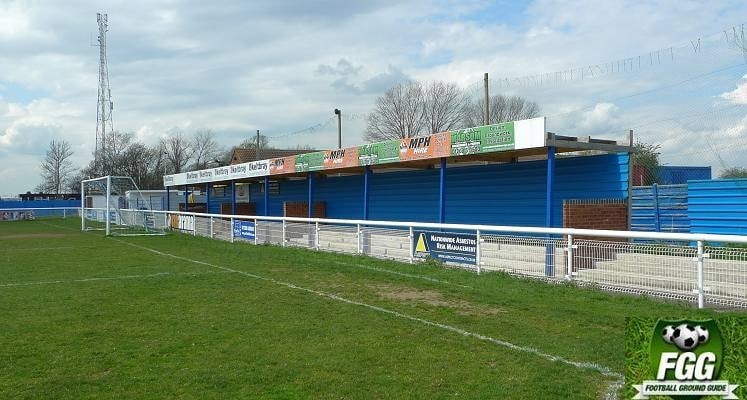 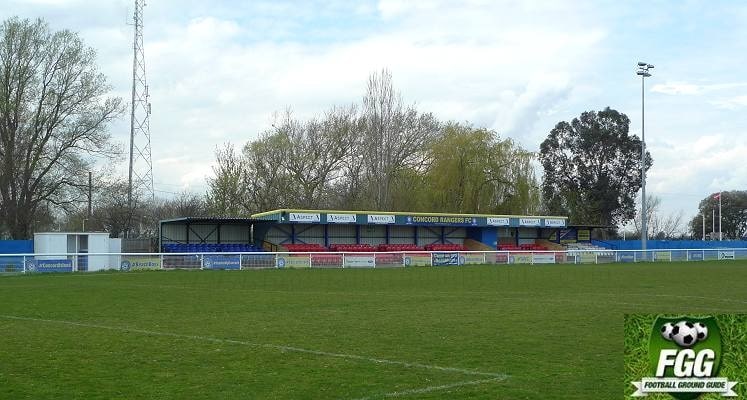 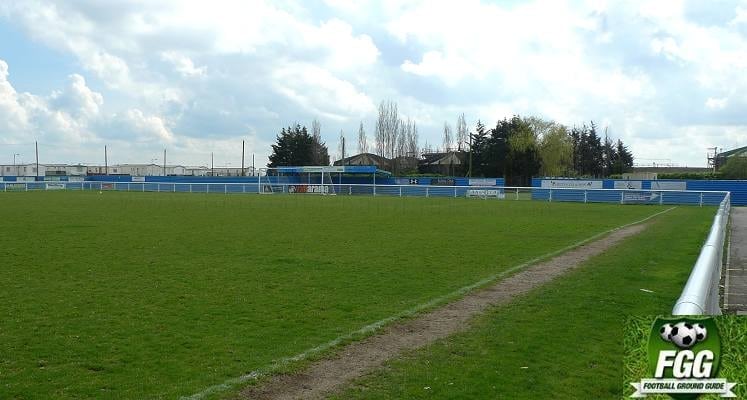 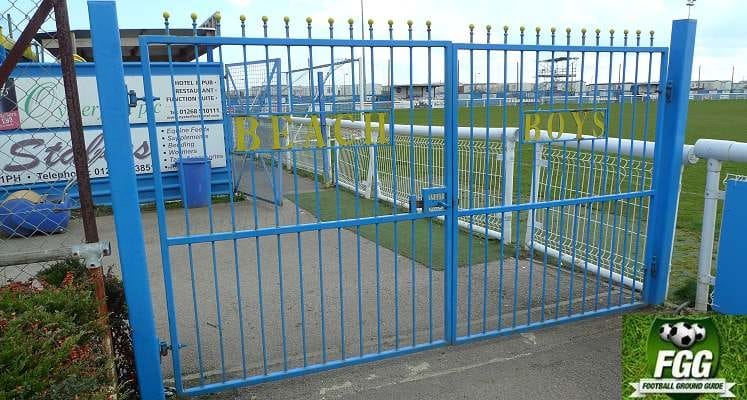 The Aspect Arena, or Thames Road as it is still known to many fans, is a rather basic ground, that seems at first glance to be situated in the middle of nowhere! On one side is a small Main Stand, which runs for around half the length of the pitch, sitting astride the half way line. This covered all seated stand has just four rows of seating and at the the back there is a small press box. On either side of this stand are two small additional covered seating areas, that look temporary in nature and almost 'bolted on' to either end of the Main Stand. They are both quite small having 50 seats each. Opposite on the Caravan Park side of the stadium, it is mostly open with just a flat walkway running down behind the pitch perimeter. Apart from the sight of a number of caravans that overlook the ground, its main feature is a sizeable scaffolded structure that serves as a television gantry. This sits astride the half way line, with the team dugouts situated out front and to either side. Also on this side of the ground are two very small temporary seated stands, that are covered and also contain 50 seats each. At the back of this area the Club have put some netting put up to try and stop balls going over into the adjacent caravan park but this is not always successful.

At the South End of the ground there isn't a terrace as such but a small flat standing area behind the goal that has had a small covered erected, which has a number of supporting pillars. The North End or Clubhouse End is slightly better, having a small covered terrace located behind the goal. On one side of this end are some wrought iron gates with the Club's nickname 'Beach Boys' incorporated within them. The club house and dressing rooms occupy the north west corner of the ground. Thames Road is completed with a set of four modern looking floodlight pylons, two of which are (unusually) set on each side of the ground rather than one in each corner.

It is virtually unheard of for fans to be segregated at Thames Road, which means you can enjoy the Non-League tradition if you wish, of changing ends at half time. Food on offer inside the ground includes; Cheeseburgers (£3.20), Hot Dogs (£3), Bacon Rolls (£2.30), Chicken Nuggets (6 for £1.60) and Chips (£1.50). The Club also offer a 'meal deal' of Burger or Hot Dog, Soft or Hot Drink and Chips (£4.70). The facilities inside the ground are pretty basic but normally a friendly a relaxed visit awaits.

At the ground itself is the aptly named 'Beach Bar', which is a fair sized bar which is open to all. Otherwise due to the remote location of the ground, there is nothing else within walking distance, in terms of pubs and eating establishments. There are a couple of pubs and eating places in Canvey Island itself, otherwise if you arrive early and have a bit of time on your hands, then around a ten minute drive further along the river bank, is the Lobster Smack pub which also serves food.

Take the A130 towards Canvey Island, and after about four miles from the A13/A130 junction you will pass Canvey Island Infant School on your right. You will then reach a mini roundabout where you turn right into Thorney Bay Road. Then take the third right into Thames Road. The ground is further down this road on the left. There is a fair sized car park at the ground, or street parking on the road running alongside the ground.

The nearest railway station is Benfleet which is located just under three miles away from the ground. Benfleet station is served by trains from London Fenchurch Street. There is a taxi rank outside the station. It will cost around £10 to the ground. Alternatively First Bus run regular services from Benfleet Railway Station to Canvey Island. Bort services Number 21 (from Bus Stop A) and Number 27 (From Bus Stop C) go along Thorney Bay Road, which is at the top of Thames Road for the ground. See the First Bus website for timetables and fares.

Find And Book Your Locall Hotel And Help Support This Website

If you require hotel accommodation in the nearby Basildon or Southend area then first try a hotel booking service provided by Booking.com. They offer all types of accommodation to suit all tastes and pockets from; Budget Hotels, Traditional Bed & Breakfast establishments to Five Star Hotels and Serviced Apartments. Plus their booking system is straightforward and easy to use. Just input the relevant dates and click on "Search" below or on the hotel of interest on the map to get more information. The map is centered on the football ground. However, you can drag the map around or click on +/- to reveal more hotels in the town centre or further afield.

Map showing the location of the Aspect Arena in Canvey Island

Special thanks to Russell Cox for providing the photos of the Concord Rangers fotball ground. Visit his Wycombe Wanderer groundhopping blog.