Looking at the Meadowbank Ground you would find it hard to believe that football has been played here since 1953, as it is completely modern in all aspects. A new ground and a Headquarters for the Surrey Football Association were opened on the site in 2018, at a cost of around £5m. Originally the home of Dorking FC, who after 137 years folded in 2017, the area's newcomers Dorking Wanderers were able to continue flying the football flag for the town. Considering that Dorking Wanderers were only formed in 1999, then their progress up the league pyramid has been nothing short of phenomenal. Eleven promotions in 20 years says it all and they moved to Meadowbank in 2018 after previously playing at the Westhumble Playing Fields.

The ground is located in a picturesque setting with the tall spire of St Martins Church overlooking the ground from one side. While looking out over the other side spectators can enjoy views of the Surrey Hills. On one side is the Main Stand. Containing 250 seats located in six rows, this covered all-seated stand is raised slightly above pitch level. This means that spectators have to climb a small set of steps to enter it. Running for around a quarter of the length of the pitch, the stand straddles the halfway line and has windshields to either side. To one side of the stand is a larger club building, which amongst other things contains the social club on the first floor. Whilst on the other side of the Main Stand is a small covered standing enclosure. Opposite on the North Side of the pitch as well at the West End the ground is open to the elements and doesn't have spectator facilities as such, apart from some small flat standing areas, running behind the pitch perimeter fence. The team dugouts are located on this site, leading to a procession of players and club staff at half and full time as the dressing rooms are located on the other side of the ground. Behind these dugouts is a small electronic scoreboard that was working on my visit.

The East End was largely open but during the Summer of 2020 two new stands were erected at that end. These include a 272 seat Family Stand, which is covered and a 670 capacity open terrace, which the Club has christened 'The Bank'. Behind this end is a wooden clad building that contains a cafe and children's indoor play area. The teams come out on to the pitch from the dressing rooms located near the South- East corner of the stadium. Around the ground constructed above the perimeter fence are wired panels that are to try and prevent balls being kicked out of the stadium, this is particularly needed on the North and West sides of the ground where it is overlooked by houses. Plus there are public footpaths running behind the North and East sides too. The ground has an artificial 3G pitch, as well as eight tall thin floodlights, four of which are located down each side.

Normally I am not a fan of new build grounds, but in the case of Meadowbank, I will make an exception. Firstly the facilities are excellent. You can see at first hand that this ground has not been built on the cheap. Secondly, unlike most new builds that are located out of town, Meadowbank is only a few minutes walk from Dorking High Street, where there are plenty of pubs and eating places to be. Add in a nice setting and a friendly welcome and you have all the ingredients of a good footballing day out.

Normally fans are not segregated at Meadowbank, but if they were to be then away supporters would be given the East end of the ground, which comprises a small covered terrace and areas of open flat standing. The small covered standing areas to allow for some noise to be generated. Food on offer is the usual football fayre of Cheeseburgers (£3.50 single, £5 double), Burgers (£3 single, £4.50 double), Hot Dogs (£3) and Chips (£2), But alas no pies! I also noticed on my visit that it was quite easy to peer over the perimeter fence on the North side. Not that I would be encouraging you to watch the game for nothing. 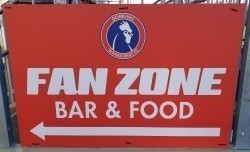 There is a small lounge bar located on the first floor of the club buildings, which is also called the Healthy Kitchen. The bar has Sky and BT Sports and enjoys good views across the ground. It normally welcomes visiting supporters. However, due to its size, it can get quite crowded. There is also an outside Fan Zone bar next to the Main Stand that it is contained within a wooden chalet type building and has a number of tables and seats. Apart from bottles of beer, plus wines and spirits, it also offers a number of draught drinks at around £4 a pint including; London Pride, Fosters, Guinness and Stowford Press. You are also allowed to smoke in this outdoor bar area.

If arriving at Dorking Railway Station, then on the Station Approach is the Lincoln Arms which is listed in the CAMRA Good Beer Guide.

Leave the M25 at Junction 9 and take the A243 and then the A24 towards Dorking. After around 12 miles of mostly dual carriageway, you will reach the outskirts of Dorking. Continue past the turn off for the railway stations on your left and the Lincoln Arms. At the next roundabout take the fourth exit onto the A25 (Signposted Dorking Town Centre). After passing a BP Garage on your left continue straight along the High Street. On reaching the White Horse Hotel on the left, turn right into Mill Lane (Signposted St Martin's Walk Parking/Football Ground). At the fork in the road bear left for the St Martin's Walk Car Park (Pay and Display £1 per hour), or bear right down the narrow lane to the ground entrance, which is at the bottom on the left. However, there is no parking available to visiting supporters at the ground.

The St Martin's Walk Car Park holds over 350 cars so is of a fair size. If it is full then there are other pay and display car parks signposted off the High Street. There is plenty of street parking to be found on the other side of the ground to the High Street around Chalkpit Lane (RH4 1EY). Then at the bottom of this road, there is a footpath (across from the handy Dolphin Fish & Chip shop) going to the left that leads you to the ground.

Exit the main entrance at Dorking Station and proceed down the Station Approach Road in front of you. Go past the Lincoln Arms and turn left alongside the dual carriageway. Go under the railway bridge and cross over the dual carriageway using the pedestrian crossing. The turn right at the Esso Station onto London Road. Then take the second right into Rothes Road. At the end of Rothes Road, you need to turn left. At the end of the wall turn right and immediately right again onto the pathway running alongside a row of cottages, to take you down to the ground. If you want a slightly more direct and picturesque route then on proceeding down London Road you will reach a small development of new houses on the right called Tutts Close. You will see a pathway going down in-between some railings. This will lead you down alongside a brook and the edge of a park to the ground.

From Dorking Deepdene: Come down from the station and cross the main road (London Road), at the lights. Once across turn left and then right into what is still London Road. Bear right down Tutts Close and follow the footpath beside the river. At the children’s playground, go straight on and the turnstiles are on the right. 10 minutes walk (maximum).

From Dorking West: Far less trains stop here and it is tucked away amongst some industrial buildings, but for completeness, directions are as follows: Exit the station from the south platform (Reading bound trains). Go down a narrow path and then turn left into Station Road. Walk down this road until you come to some shops. Walk directly in front of the shops and cross the main road, (Chalkpit Lane), going straight across. There is a footpath just about there that will take you directly to the North West corner of the ground. Do NOT turn right at this point. Keep straight on, following the perimeter of the ground right round to the back of the main stand where you will find the turnstiles. (10 minute walk).

Thanks to Brian Scott for providing the train information.

* With current NUS Card.
** When accompanied by a paying adult.

Dorking Hotels - Find and Book Yours And Help Support This Website

If you require hotel accommodation in the Dorking area then first try a hotel booking service provided by Booking.com. They offer all types of accommodation to suit all tastes and pockets from; Budget Hotels, Traditional Bed & Breakfast establishments to Five Star Hotels and Serviced Apartments. Plus their booking system is straightforward and easy to use. Just input the dates below that you wish to stay and then select from the map the hotel of interest to get more information. The map is centered to the football ground. However, you can drag the map around or click on +/- to reveal more hotels in the town centre or further afield.

Leatherhead and in this league Eastbourne Borough.

If there is anything that needs to be updated or if you have something to add to the Guide to Meadowbank Dorking Wanderers then please email me at: contact@footballgroundguide.com.