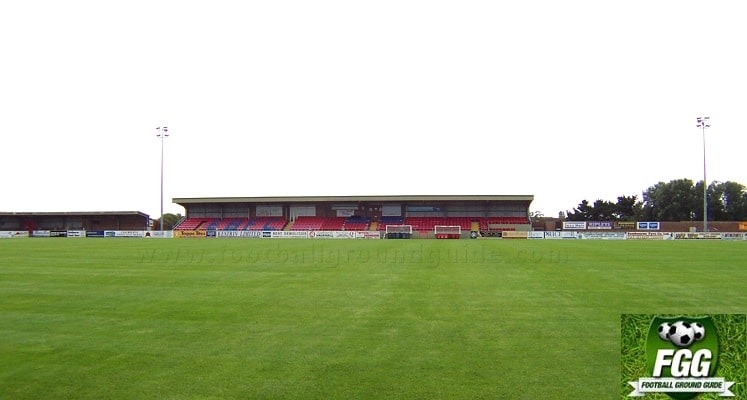 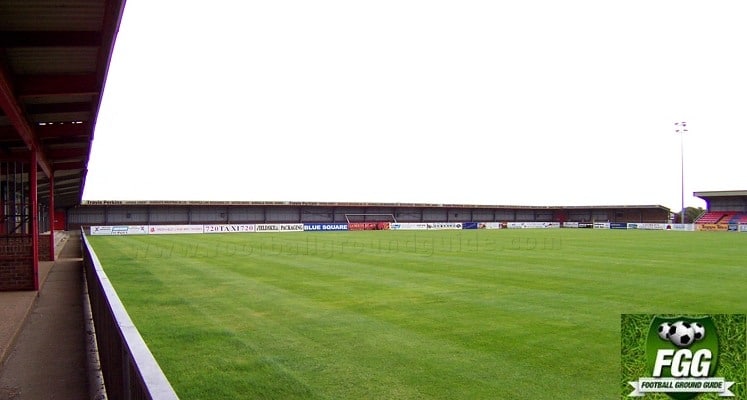 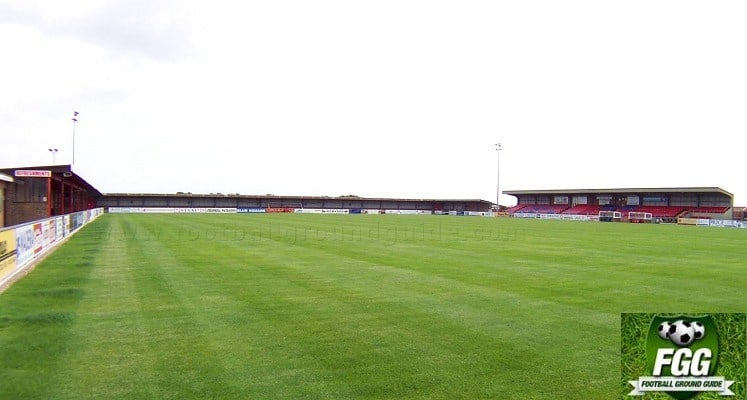 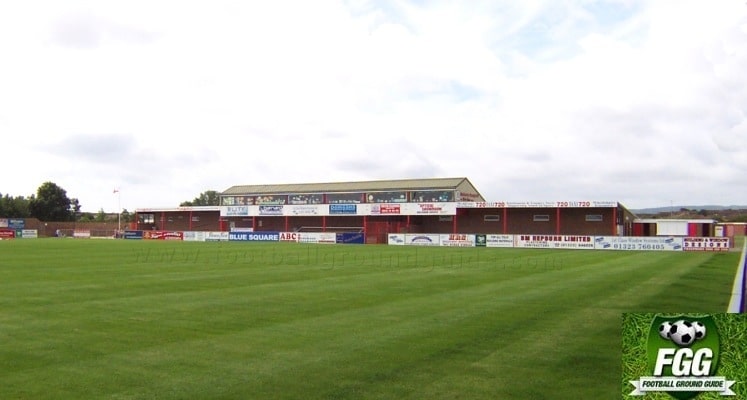 Although Priory Lane is a tidy and well-kept ground, it has a smaller feel to it than some other grounds in the Division. On one side is the smart-looking Main Stand. This covered, all seated stand, has a capacity of 542 seats. There are no supporting pillars, resulting in good views of the playing action. However, the stand runs for about half the length of the pitch and strangely has been built mostly to one side of the half way line, so that the team dugouts that are located in front of the stand, sit to one side of it, rather than as you would expect in the middle. Opposite is a small covered terrace, called the Peter Fountain Stand, that extends again for around half the length of the pitch. In one corner this meets the River End Terrace, which is covered. The opposite end, the Mick Green Stand, is a small covered area that is divided into two. The team entrance from the dressing rooms to the ground runs out from this end, splitting the terrace. During the Summer of 2016, the Club installed a new 3G artificial playing surface.

In the rare occurrence that fans are segregated, then away supporters are housed in the River End Terrace at one end of the ground. This terrace, although only a few steps high, does at least have some cover. The stewarding is fairly relaxed and normally a hassle free day out. The Club provide their own catering which includes the usual fayre of Cheeseburgers, Burgers, Hot Dogs, Chips etc.. but alas no pies! A popular away trip as many decide to make a weekend of it at the seaside.

The club is situated on the very outskirts of town, so there is little in the way of local pubs. There is though a large Clubhouse at the ground that has two bars; the Sports Bar, and the smaller Happy Jacks Bar. However, for larger games, this may be only open for home fans, so it may be an idea to check with the Club beforehand. Alternatively, there are three pubs within 20 minutes walk of the ground; 'The Martello Inn' on Langney Rise, 'The Kingfisher Tavern' at Langney Shopping Centre and 'The Friday Street Farm' which is a pub/restaurant in Friday Street.

Luke Thomas adds; 'There is also the Garden Bar plus a Harvester and few other bars located in the Waterfront area of the harbour what is around a 15 minute walk from the stadium. With the stadium behind you turn left and walk along Priory Road. Take the second left into Netherfield Avenue and then the third right into Telscombe Road. Follow this road up and around to the left where it becomes Tanbridge Road. On the right, you will see a bridge that you need to crossover. This brings you onto the main A259 Pevensey Bay Road. Turn right along this road and at the roundabout (with an Asda store on one corner) turn left (signposted Sovereign Harbour Village). Continue straight down this road into the Waterfront Complex.' If driving then as above but instead follow Priory Road to its end where you turn left into Langney Rise. At the next roundabout take the first exit into Pevensey Bay Road and at the next roundabout turn right by Asda for the Waterfront. There is a free car park which is signposted at the Waterfront.

For those who arrive at Eastbourne Station, then there is the nearby London & County pub. Whilst for those alighting at Pevensey & Westham, then five minutes walk away in Westham,  is the Heron pub on the High Street, that has a beer garden and also serves food.

From the direction of Brighton on the A27 take the A22 towards Stone Cross and Westham. At the next roundabout take the first exit again towards Stone Cross and Westham. Continue towards Stone Cross village until you will come to a crossroads, with a church on your left and the Red Lion pub on the. Turn right just past the pub onto the B2104 Friday Street. At the end of Friday Street, turn left at the double mini-roundabout into Hide Hollow (B2191). After passing Eastbourne Crematorium on your right, turn right at the roundabout into Priory Road. The entrance to the ground is about 200 yards down the road on the left. There is a good-sized car park at the ground which holds 400 cars, part of which is allocated to away supporters and is free of charge. As there is only one entrance/exit to the car park, then this can lead to a bit of a bottleneck at the end of the game.

The nearest station to the Priory Lane ground is Pevensey & Westham, which is around a mile and half away. However, it is not served by any practical public transport that can take you to the ground. It may be more practical to head for Eastbourne station instead. Although Eastbourne Station (which is served by trains from London Victoria) is around four miles away from the stadium, it does have public transport links and a taxi rank, whereas Pevensey & Westham does not. As Jim Burgin explains; 'Fans who come by train should get off at Eastbourne Station, walk off the platform and aim for the new exit at the one o'clock direction. Turn left at the taxi rank and to the new bus stop. This avoids the need to go into the town centre. Catch the Eastbourne Loop bus, going towards Langney. This bus passes the ground. Ask for a dayrover ticket which is currently £4.50 this will act as a return ticket. Buses run every 15 minutes or so and the journey takes around 25 minutes. On a Saturday after the game has ended, the bus can be caught back into Eastbourne from outside the ground around every 15 minutes up to about 6pm, and stops in Gildredge road directly opposite the station On evening weekdays the bus leaves at either 21:20 or 22:31 to get back to the station'..You can view a bus timetable on the Traveline South East website. Otherwise grab a taxi up to the ground.

If you do decide to go to Pevensey & Westham station, then it is a ten minute train ride from Eastbourne Station. Turn left out of the station towards the industrial units and past the cow fields! then left at the roundabout into Priory Road to find the ground. Alternatively, if you have a bit of time on your hands; then turn right out of the station (towards mini roundabout) into Westham village and within a 5 minute walk you'll find the 'Swan' fish and chip shop and the 'Heron' pub and also Pevensey Castle (which charges a small admittance fee). Thanks to Wil Orange for providing these directions and info.

Map Showing The Location Of The Priory Lane Football Ground

If you require hotel accommodation in Eastbourne then first try a hotel booking service provided by Booking.com. They offer all types of accommodation to suit all tastes and pockets from; Budget Hotels, Traditional Bed & Breakfast establishments to Five Star Hotels and Serviced Apartments. Plus their booking system is straightforward and easy to use. Yes this site will earn a small commission if you book through them, but it will help towards the running costs of keeping this Guide going.