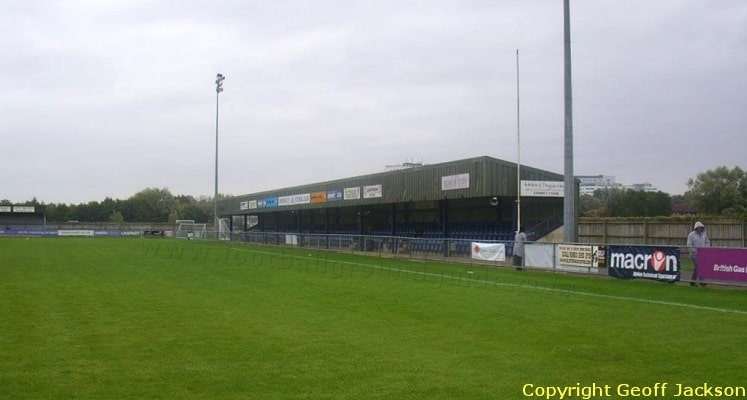 Opened in 1993 the Court Place Farm Football Ground is quite an open one. On one side is the Main Stand. This covered all seated stand runs for just over half the length of the pitch. It contains four rows of seating and has windshields to either side. The main disappointment is there a large number of supporting pillars running across the front of it. Opposite is a small covered terrace that is around the same size of the Main Stand in length, straddling the half way line. Unusually for a terrace it has windshields to either side, although it does have some supporting pillars. It has the team dug outs located in front of it, where as normally you would expect them to be located in front of the Main Stand. There is a new seated stand erected in 2016/17 positioned towards the North West end of the ground on this side. It has four rows of seats, with 158 in total. The Marsh Lane End itself is dominated by the club house and Club offices which sits directly behind. Although its green colour may have been intended to help it blend in with the environment, it seems to me to do quite the contrary. It does though feature the entrance gates to the Club's former nostalgic White House ground. There is a flat standing area for spectators in front of it. At the other end is a small covered terrace, that runs for around half the length of the pitch and is situated directly behind the goal. Again there are a number of supporting pillars running across the front. The stadium is completed by a set of four modern floodlight pylons.

In 2018 a new artificial 3G pitch was installed at the Court Place Farm Stadium.

The Club are expected at some stage to install an artificial surface at the Marsh Lane ground, possibly in time for the start of the 2016/17 season.

Normally a relaxed and friendly day out. Normally there is no segregation at Court Place Farm, but on the rare occurrence that it is, then visiting supporters are housed in the East Terrace at one end of the ground. This small covered terrace has a capacity of around 400. It is only a few steps high and has a number of supporting pillars running across the front of it that could impede your view. Food on offer inside the ground includes; Bacon Cheeseburgers (£3.20), Bacon Burgers (£3), Cheeseburgers (£2.70), Bacon & Egg Rolls (£2.70), Beefburgers (£2.40), Bacon Rolls (£2.20), Sausage Rolls (£1.50), Cheese and Onion Pasties (£1.50) and Egg Rolls (£1.50).

There is a large club house inside the stadium. Otherwise there didn't seem to be any other pubs within the vicinity of the ground.

From the North:
Leave the M40 at Junction 9 and take the A34 towards Oxford. Follow the A34 for seven miles until you reach the A44/A40 turn off. Leave the A34 and at the roundabout take the ring road towards London (A40)/Oxford. At the next roundabout take the second exit continuing along the ring road, which is now the A40 in the direction of London. Proceed along the A40 for two miles and then and then leave and take the slip road signposted Marston and Hospital. Follow the slip road aroung and over the A40 and this brings you onto Marsh Lane. The entrance to the stadium is just down on the left.

From the South:
Leave the M40 at Junction 8 and take the A40 towards Oxford. Follow the A40 for seven miles and then leave and take the slip road signposted Marston and Hospital. At the top of the slip raod turn left towards City Centre and Marston. You are now on Marsh Lane, the entrance to the stadium is just down on the left.

Car parking:
There is a fair sized car park at the ground which is free.

Oxford Railway Station is over three miles away from the stadium, so it is really too far to walk. So best to jump in a taxi up to the ground. Nigel Long adds; 'Alternatively, you can catch the number 14A bus (which is hourly, daytime only) direct from the station to the ground (Stop: Marston, adjacent Horseman Close). Alternatively, there is a more frequent bus service number 14 daytime and evening services from the station or the city centre to Cherwell Drive, which is a 10 minute walk from the ground. (Stop: Marston, adjacent Ewin Close). See the Stagecoach website for timetable information. You can also buy a 'PlusBus' ticket which allows an adult unlimited bus travel in Oxford for one day. This costs £4 per adult or £2 per child. Brian Scott informs me; 'Both the 14 and 14A services are hourly and provide a bus to the John Radcliffe Hospital every 30 minutes. There is also a number 13 which takes a different route, but serves the same bus stop as the number 14 (Marston, adjacent Ewin Close.) The number 13 runs every 20 minutes. Note the X13 does NOT take you back to the station after the game. Also, if you are catching the 14A after the game double check you are standing on the correct side of the road as it heads north before turning off. Service 13 is provided by the Oxford City Bus Company.

Find and Book Your Oxford Hotel And Help Support This Website

If you require hotel accommodation in Oxford then first try a hotel booking service provided by Booking.com. They offer all types of accommodation to suit all tastes and pockets from; Budget Hotels, Traditional Bed & Breakfast establishments to Five Star Hotels and Serviced Apartments. Plus their booking system is straightforward and easy to use. Just input the dates below that you wish to stay and then select from the map the hotel of interest to get more information. The map is centered to the football ground. However, you can drag the map around or click on +/- to reveal more hotels in the city centre or further afield.