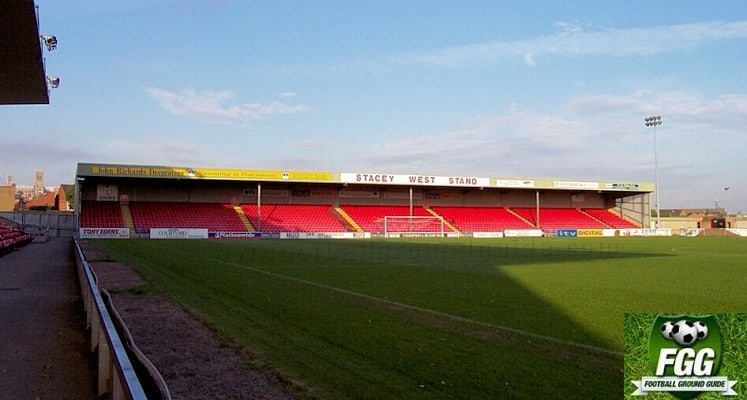 The Club have announced that they are looking at the prospect of building a new stadium on the Western side of Lincoln, towards the end of Beevor Street, around one mile away from Sincil Bank. The Club are proposing to build a 10-12,000 capacity stadium and are hoping to design something unique. However, the proposed site has poor access and is hemmed in by railway lines, so a bridge will need to be built to give access, which could be a stumbling block.

Despite this, early in 2022, the local council have approved the plans that also comes with a raft of other developments including housing, schools and retail outlets. There are, however, several objections so no building is guaranteed.

On one side is the large all-seater Co-op Community Stand. This large single tiered covered stand opened in 1995 and has a capacity of 5,700. Opposite is the Selenity Stand, a small old looking covered stand (although in fact, it is comparatively modern being built in 1987). It is seated, but only runs half the length of the pitch, straddling the halfway line and hence there are gaps on either side. One gap has now been partly filled by a tiny covered Family Stand. Both ends are small covered affairs. The Bridge McFarland Stand is all seated and has a row of executive boxes running across the back. This stand has a couple of supporting pillars at the front. The other end is the ‘Stacey West’ all seated, covered stand, for home supporters. It was named in memory of the two Lincoln supporters who lost their lives in the Bradford City Fire at Valley Parade in 1985. Unfortunately, this stand is normally only open for games where a larger than normal attendance is expected.

The Club have been granted planning permission to expand the capacity of the Stacey West Stand to 3,400. Currently, the capacity of this stand is 1,944 and this is normally split between home and away supporters. Rather than building an entirely new stand, the existing stand will be extended upwards and backward and will include new concourse areas for both home and away fans. The Club have also mentioned that depending on what division they are in, that they may include rail seating, making a safe standing area, for the extension as shown below. The Club are now looking for a construction partner to undertake the project and no timescales have been published as to when this might happen. The image above is courtesy of Lincoln City FC.

Away fans are normally located on one side of the Stacey West Stand (towards the Selenity Stand) at one end of the ground, where just over 1,000 fans can be accommodated. Where the away following is expected to be less than a couple of hundred, then away fans are housed in the small family stand and a block of the Bridge McFarland Stand, in the South East corner of the stadium.

The Stacey West Stand is a covered, all seated stand, generally has good views of the playing action, although it does have a couple of supporting pillars at the front of the stand that could affect your view, especially if your team has a very large following and you are unable to move seats. This stand is shared with home supporters with the obligatory ‘no-mans land’ in-between. This makes for a good atmosphere, further aided by the good acoustics of the stand is very good, meaning that even relatively few travelling fans can really make some noise. It is sometimes shared with home fans that further helps boost the atmosphere. The facilities are also okay and food on offer inside includes a range of Pukka Pies; All Steak, Chicken & Mushroom, Beef & Onion, Cheese & Potato (all £3.10), Sausage Rolls (£2.50), Cheeseburgers (£5 1/2 lb, £4 1/4 lb), Burgers (£4.80 1/2lb, £3.80 1/4lb), and Hot Dogs (£3.70).

I had an enjoyable day at Lincoln. There is generally a good atmosphere inside the ground, with plenty of noise being created by the local home supporters. Although the drummer in the home section and noise of an air raid siren being sounded, each time Lincoln get a corner, can get a bit annoying after a while. The teams also emerge at the start of the game to the entrance music of the Dambusters theme tune.

Jason Adderley a visiting West Brom supporter adds; ‘Lincoln’s small band of fans are passionate about their team and are one of the friendliest bunches I’ve met on my travels. The atmosphere was great and the drums were rousing, leading the chants of the Lincoln supporters.’

There is a small fan zone located outside the stadium which is for both home and away supporters. It has a number of food outlets, some with local produce and beer is available too. Neil Le Milliere a visiting Exeter City fan adds; ‘away supporters are admitted to the Supporters Club at the Club (called the Trust Suite) behind the South Park Stand’.

Otherwise, there are plenty of good pubs to be found if you head along the High Street towards the town centre. Close to Sincil Bank on the High Street is the Hop and Barley micropub. John Bennett a visiting Bristol Rovers supporter recommends the Golden Eagle, which is a Castle Rock Brewery pub. Whilst Jon Morley adds; ‘The Wetherspoon’s pub called ‘The Ritz’ serves reasonably priced food and ales’. If arriving by train then not far from the station is the Marina area, which has a number of eating and drinking places, including a Wetherspoons pub called the Square Sail. When trying to find the Marina area, just look out for the large Odeon Cinema building, which is also on the same complex. Also near to Lincoln Railway Station is the Treaty of Commerce. Beer is not on sale inside the ground in the away section.

Also near to Sincil Bank on Scorer Street is the handy ‘Back of the Net’ Fish and Chip Shop.

Lincoln have been around since 1884 and all but one of those years has seen them play their home matches at Sincil Bank. That one year was spent at John O’Gaunts, which was basic in the extreme. Sincil Bank isn’t exactly elite level either but it was redeveloped just prior to the turn of the century.

Lincoln is not the easiest place to get to, as it is not conveniently situated next to a motorway. I had great difficulty in finding the ground and two people that I asked for directions were unaware that Lincoln had a football team! However, I have been recently informed that the ground is now well signposted around Lincoln. Otherwise, follow the A46 into Lincoln (which leads onto the High St) and the ground is indicated from there. If you follow the signs for ‘away coaches’ then this leads you onto the A158 South Park Avenue, where there is plenty of street parking to be found (although it is a ten-minute walk around to the ground). Otherwise, the signs lead you to the ground,

There is no parking for away fans at the ground. Instead there nearby the South Common car park (LN5 8EN) which costs £4.

Lincoln Central Railway Station is around a 15 minute away from Sincil Bank. Turn ‘left out of the train station and walk up to the traffic lights next to St. Mary’s church. Turn left at these traffic lights onto the High Street, walking over the railway level crossing. Walk along the High Street (passing many good pubs) for approx 10 minutes before turning left into Scorer Street. Walk along Scorer Street until you come to a bridge across the Sincil Drain river. Turn right immediately after crossing the bridge onto Sincil Bank, the ground is straight ahead. Thanks to John Smalley for providing the directions.

Alternatively there is a shorter route (but you miss those fine pubs!): ‘Come out of the station and turn right to go down the road. About 30 yards ahead on your right you will see some steps and a bridge over the railway. Go over the bridge and once on the other side follow the road down to the ground’. Thanks to Ben Schofield for providing these directions.

All areas of the ground*

In addition, the Club offers family tickets (no discount for early purchase): 1 Adult + 1 Under 18 £26

* Fans who become Lincoln City Club Members can qualify for a discount on these prices.

Lincoln vs Grimsby rivalry: Lincoln and Grimsby are separated by just 40 miles and, with just three professional clubs in the county, it was inevitable that their games would take on a fair amount of heat.

Lincoln vs Scunthorpe rivalry: This derby match is much like Lincoln vs Grimsby with Scunthorpe the third professional team in Lincolnshire. They two are actually closer together at 34 miles. Neither of the rivalries are more or less significant than the other.