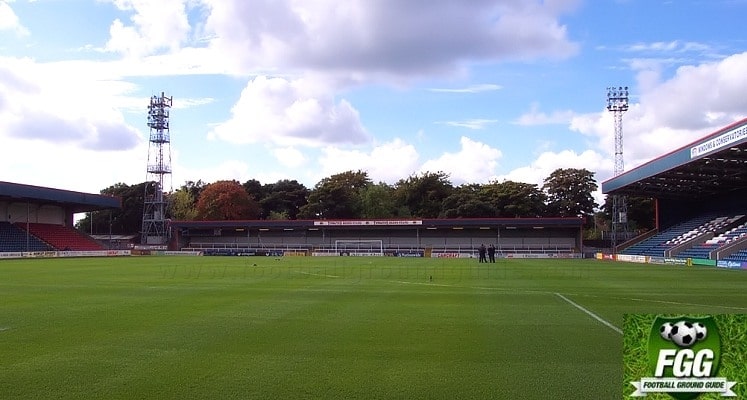 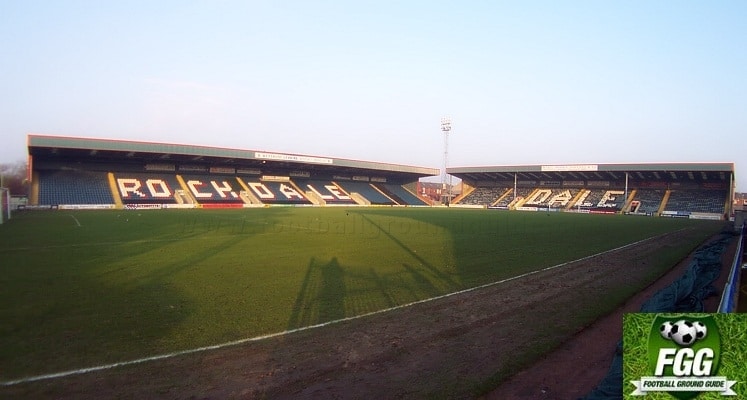 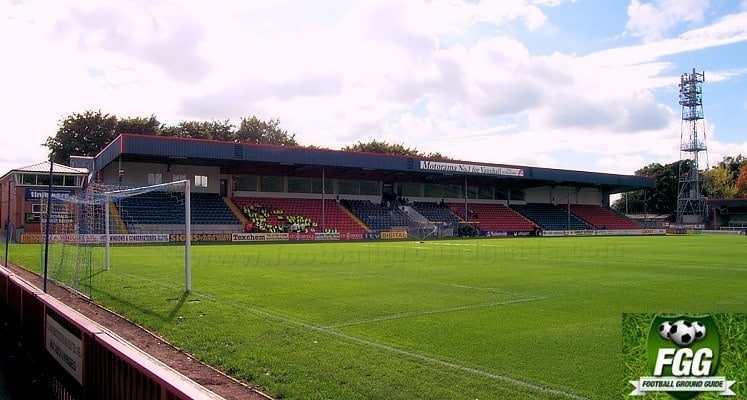 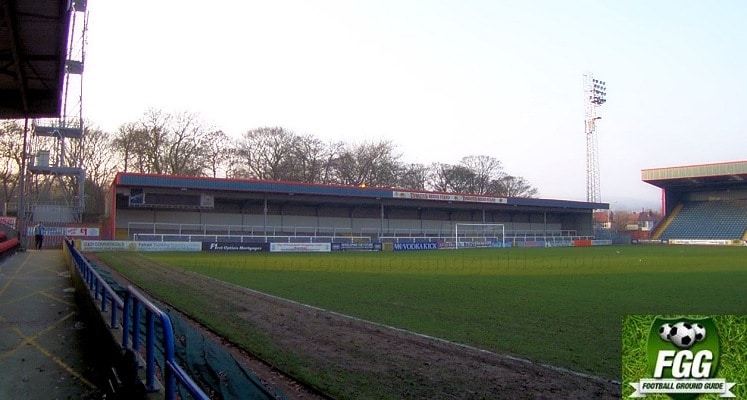 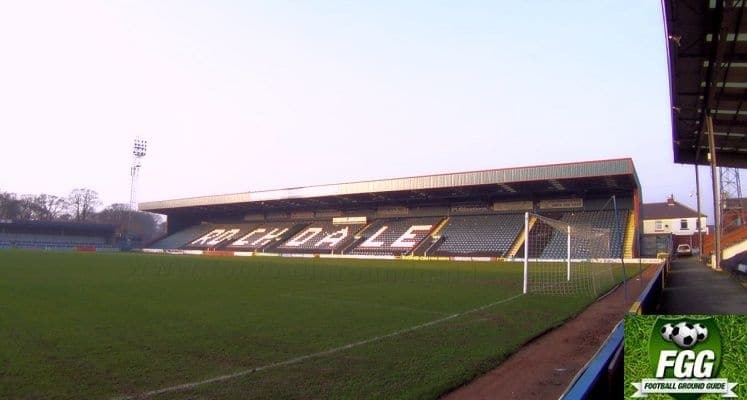 The Spotland football ground has benefited greatly with the construction of three new stands during the 1990’s and year 2000. It is quite picturesque, with a number of trees being visible behind the stands. The last of these new stands to be opened was the smart looking Willbutts Lane Stand at one side of the pitch, which was opened in 2000. This single tiered stand replaced a former terrace and has a capacity of 4,000. On the other side is another single tier, the all seated Main Stand. This has a number of supporting pillars and some executive boxes at the back. At one end the Pearl Street Stand is the third of the new stands. This is also all seated and serves as a Family Stand. It has a couple of supporting pillars that are right at the front of the stand. The Sandy Lane End is the only terraced area remaining. It is on the small size but does at least benefit from having a roof.  There is a Police Control Box located in one corner, between the Main & Pearl Street Stands. Spotland is shared with the Rochdale Hornets rugby league team.

In 2016 Spotland was renamed the Crown Oil Arena in a five-year corporate sponsorship deal.

In terms of physical development there is little going on at Rochdale’s ground. There has, however, been talk of a change of political boundary, which would see the stadium sit in a different constituency. The idea was ridiculed by one of the local officials – Andy Kelly, a Lib Dem, – as he cited it would “dilute” the club’s name and history.

Rochdale have played their home games at Spotland for 102 years now after first moving in in 1920 – 13 years after their formation. Prior to that they played games – albeit out of the football league – on the same piece of land. At that time, it was known as St Clement’s Playing Fields and didn’t so much as feature a single stand.

Away supporters are housed on one side of the Willbutts Lane Stand, where around 1,500 fans can be housed. If demand requires it, then the whole of this stand can be given to visiting fans increasing the allocation to 3,650. The stand is normally shared with home supporters with away fans being seated towards the Sandy Lane End. The view of the action and facilities within are both pretty good. The acoustics are excellent, so away fans can really make some noise from within it. This, coupled with both home ends singing, makes for a good atmosphere. If Rochdale do score then ‘Samba de Janeiro’ blasts out around the ground from the p.a. system.

I would say that Spotland in my book, is one of the best footballing days out in the country. Friendly & knowledgeable fans, good stewards, good facilities, a couple of pubs located at the ground, a great range of pies on offer and not a bad atmosphere to boot. In other words, all the right elements to make for a great day out. Add a pretty lady on my arm, my team winning six nil and I’ll think that I have been transported to heaven!

Teresa Jewell a visiting Sheffield Wednesday fan adds; ‘The ground is homely, with the staff being helpful and polite. The pies on sale supplied by the Clayton Park Bakery were worth every penny. Parking though looked pretty bad, so I would advise getting there early if you want to park near to the stadium. The club house to the front of the ground is welcoming to away fans. There is also a chip shop facing the away end for something more substantial to eat, which does a roaring trade on matchdays’. Turnstiles at the ground open one hour before kick off.

At the ground itself, there are two bars to choose from, Studds & the Ratcliffe Arms. Studds is located underneath the Pearl Street Stand and is worth a visit if only to sample the large range of tasty pies & pasties on offer at £2.80 (which are also available inside the ground). No real ales here, but the bar has lots of memorabilia/pictures on the walls and some lovely looking barmaids which softens the blow. The Ratcliffe Arms is located at the car park entrance to the ground, on Sandy Lane. This pub has SKY TV, real ale, hot food and is family friendly. On my last visit, this pub had a mixture of home and away fans.

If you arrive early, the Cemetery Hotel, located at the bottom of Sandy Lane and on the corner with Bury Road, is also worth a visit. This comfortable historic pub has a range of real ales on offer and again friendly clientele. Beer is available inside the ground to away fans, albeit just bottles of lager.

Exit the M62 at Junction 20 and take the A627(M) towards Rochdale. At the end of the A627(M) you should be in the left hand lane to turn left at the traffic lights. Now follow the road and with Tesco on your left, go straight through the next set of lights (approach in the middle lane) into Roch Valley Way. At the next crossroads (where the Cemetery pub is on the corner) go straight onto Sandy Lane, where the ground can be found on the right after approx 3/4 mile.

Car Parking at the ground is now for permit holders only, so it is a case of finding some street parking. However the streets in the immediate vicinity of Spotland are for ‘residents only,’ so if you are not careful you could end with a parking ticket for your trouble, so check first to see if there are street parking restriction signs, before deciding to park up. There is street parking to be had along the main A680 (Edenfield Road) which can be found at the end of Willbutts Lane, only a 5-10 minute walk away from the stadium. Parking is also available at Oulderhill Community School (OL11 5EF), which is located about half a mile from the ground on Greave Avenue.

By Train or Metrolink

Rochdale Railway Station is located just under two miles away from the Sotland Ground, which is served by direct trains from Manchester Victoria, Halifax, Bradford Interchange and Leeds. Rochdale station is around a 35-40 minute walk from Spotland, so best jump in a taxi, rather than walking. Alternatively you can shorten the walking journey a bit by catching a Metrolink tram from outside the station into Rochdale town centre. If you have time on your hands however and decide to walk to Spotland from the station then here’s how:

On leaving the main entrance proceed straight on at the roundabout in front into Maclure Road. Follow this street (passing a fire station on your right) to the end and turn left at the T-junction onto Drake Street (A640). Follow this right to the end until you reach Manchester Road (A58) which is a dual carriageway. Turn right and walk along the right hand side of the road. At the major junction, which has traffic lights turn left (crossing Manchester Road) into Dane Street (A6060). Just after passing ASDA on the right, bear right onto Mellor Street (still the A6060 – here Dane Street bears left). Follow this road right to the end and bear left onto Spotland Road which soon becomes Edenfield Road (A680), bearing round to the left. Take the second left onto Willbutts Lane for the ground. Thanks to John Midgley for providing the directions.

You can also travel by the Metrolink tram from central Manchester to Rochdale Interchange as Colin Willsher a visiting Colchester United fan explains; ‘A return fare using the Metrolink from the centre of Manchester is currently £4.60 and you arrive in Rochdale, in just under an hour. Tram frequency is about every ten minutes. There is a town centre taxi rank about a hundred yards away from the Interchange. I took a taxi up to Spotland and I was charged £4.20 for the journey. If walking to the ground from the Interchange then it takes around 20 minutes to do so (I know as I walked back after the game had ended). To find the ground from the Interchange then as you come out of the Interchange turn right along Smith Street towards the town centre and then cross straight across the first roundabout onto the South Parade. Continue straight across the next roundabout onto the Esplanade with the Greater Manchester Police station on your right. Then cross over the major junction with the Manchester Road (A58) and continue straight onto Dane Street. After passing an Asda Store on your right, bear right onto Mellor Street (still the A6060 – here Dane Street bears left). Follow this road right to the end and bear left onto Spotland Road which soon becomes Edenfield Road (A680), bearing round to the left. Take the second left onto Willbutts Lane for the ground’.

* Please note that photo ID showing date of birth, needs to be provided to purchase an Under 22 ticket.

With Rochdale being located in the North West, there are countless clubs around them that could be classified as ‘rivals’. Ultimately though, the likes of Manchester United, Man City and Burnley have all moved well beyond their sphere of bitterness now. That leaves their key rivals as below:

Rochdale vs Bury rivalry: Rochdale and Bury are only separated by seven miles. That short distance and spending so much time doing battle in the lower leagues has seen things reach feverpitch at times. Bury are obviously on the up again now as well with the club back on their feet after their collapse. The derby may well resurface.

Rochdale vs Oldham rivalry: Oldham and Rochdale share a fairly similar relationship to the Dale and Bury; they’ve both spent vast amounts of time in the lower tiers of English football and are just 20 minutes apart.

For details of disabled facilities and club contact at the ground please visit the relevant page on the  Level Playing Field  website.