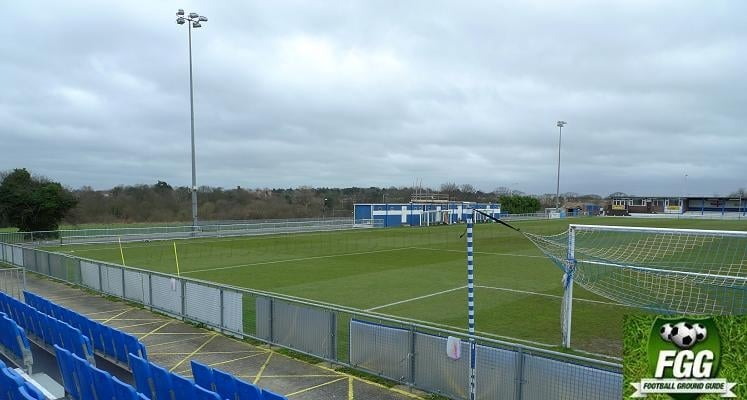 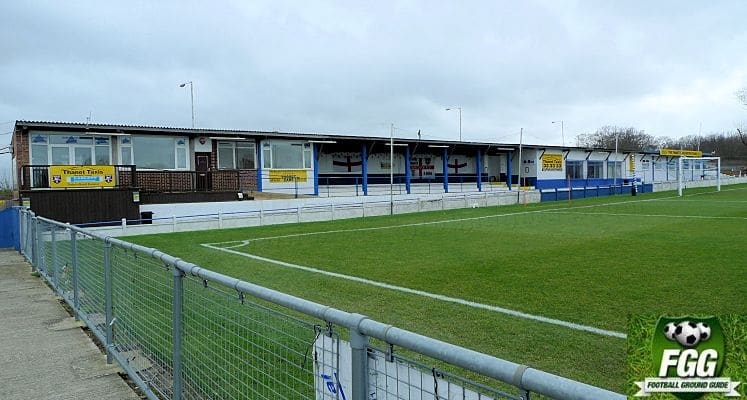 Hartsdown Road is quite a small ground, with only one permanent structure at one end. This is partly due to the fact that over ten years ago, some of the ground (including the Main Stand and terracing) was demolished in preparation for the building of new structures. However the new stands failed to materialise (although the Club still have ambitions that at some point that they will, resulting in a modern 5,000 capacity stadium) and so in the meantime we are left with of a bit of 'make-shift' basic ground.

At the Hartsdown Road End is the only structure remaining from the old ground. This is quite unusual looking, as although it has a few steps of open terrace at the front, behind it has an enclosed small covered terrace, which is sandwiched between the Clubhouse bar and other club buildings, including the Club Shop. There are some supporting pillars running across the front of this small terrace, which could impede your view, but at least it does offer some cover. One one side of the ground are a couple of temporary stands. They have situated either side of the half way and are all seated and covered. However, they are quite small being only four rows high. The opposite side is dominated by four rectangular portable type structures that are located in the middle with some flat standing areas on either side. These contain the team dressing rooms and the team dugouts are located out front. The remaining Tivoli Park End (known locally as the 'Coffin End'), has a very small covered terrace that is located directly behind the goal. To either side of this small temporary structure are flat standing areas that are uncovered. The stadium is completed by a set of four modern floodlights.

During 2017 a new artificial 3G pitch was installed at the ground.

Most matches at Hartsdown Park are not segregated, however, if segregation is put in force then away fans are allocated the Tivoli Park End. This has a very small covered terrace which is only around six rows high, with flat open standing areas to either side. If demand requires it then in addition part of the Main Stand can be given over to visiting supporters. A mobile catering unit is brought in for these bigger games for away fans to use. If segregation is not in force then you can access the club catering which sells; Cheeseburgers (£3.20), Burgers (£3), Hot Dogs (£3), Pies (£2.70) and Chips (£1.70). The Club also offer a meal deal of either Burger or Hot Dog or Pie, with chips and a hot or cold drink for £5. The ground is located on the edge of the park, so there is plenty of greenery and trees surrounding it. However it is quite an elevated position, so make sure you wrap up in winter as that sea breeze can go right through you.

The Club still have ambitions to create a modern 5,000 capacity stadium on the site.

There is a Clubhouse bar at the ground that admits visiting supporters. It is also shows televised sports. Otherwise Margate Town Centre is around a 15 minute walk away, where there are plenty of pubs to be found. On Marine Terrace, there is a Wetherspoons pub called the Mechanical Elephant. If you have a bit of time on your hands and like your real ale, then almost at the end of the harbour wall is the aptly name Harbour Arms micropubs. Along the seafront is the Two Halves micropub. Also of note is the Lifeboat pub on Market Street, which also has a wide range of real ales and ciders as well as the Northern Belle pub on Mansion Street.

Stay on the A299 for sixteen miles, until you reach a roundabout which is the junction with the A28. At the roundabout take the second exit onto the A28 continuing towards Margate. After around four miles you will pass the Margate town boundary sign. The road at this point is dual carriageway but becomes two way. After passing a BP garage on your right and then the Hussar pub, also on the right, you will pass through a set of traffic lights. Take the second right onto the George V Avenue (sign posted Ramsgate A254) and follow this road up and around to the left (passing the Hartsdown Academy School on your right). At the end of the road you will reach a T-Junction where you turn right into Hartsdown Road. The entrance to the ground is further down on the left.

Street Parking
There is a small car park at the ground, but as you would expect this fills up rather quickly. Otherwise there is plenty of surrounding street parking available.

Margate Railway Station is located just under a mile from Hartsdown Park and is around a ten minute walk. It is served by trains from London St Pancras International, London Charing Cross and a slower route from London Victoria. Margate is unusual in that trains leave for London from both ends of the station. As you come out of the main station entrance, bear right and walk up the station approach. At the roundabout turn right into All Saints Avenue and go under the railway bridge. Turn left into Tivoli Park Avenue and cross the road to walk alongside the park. After 350 yards turn right down a surfaced footpath. The floodlights of the ground can be seen to the right. The path leads directly to the turnstiles at the South East corner of the ground on Hartsdown Road.

* Includes free burger and soft or hot drink. NUS card must be shown.

Map Showing The Location Of Hartsdown Park In Margate

Special thanks to Russell Cox for providing the photos of Hartsdown Park. Visit his Wycombe Wanderer ground hopping blog.