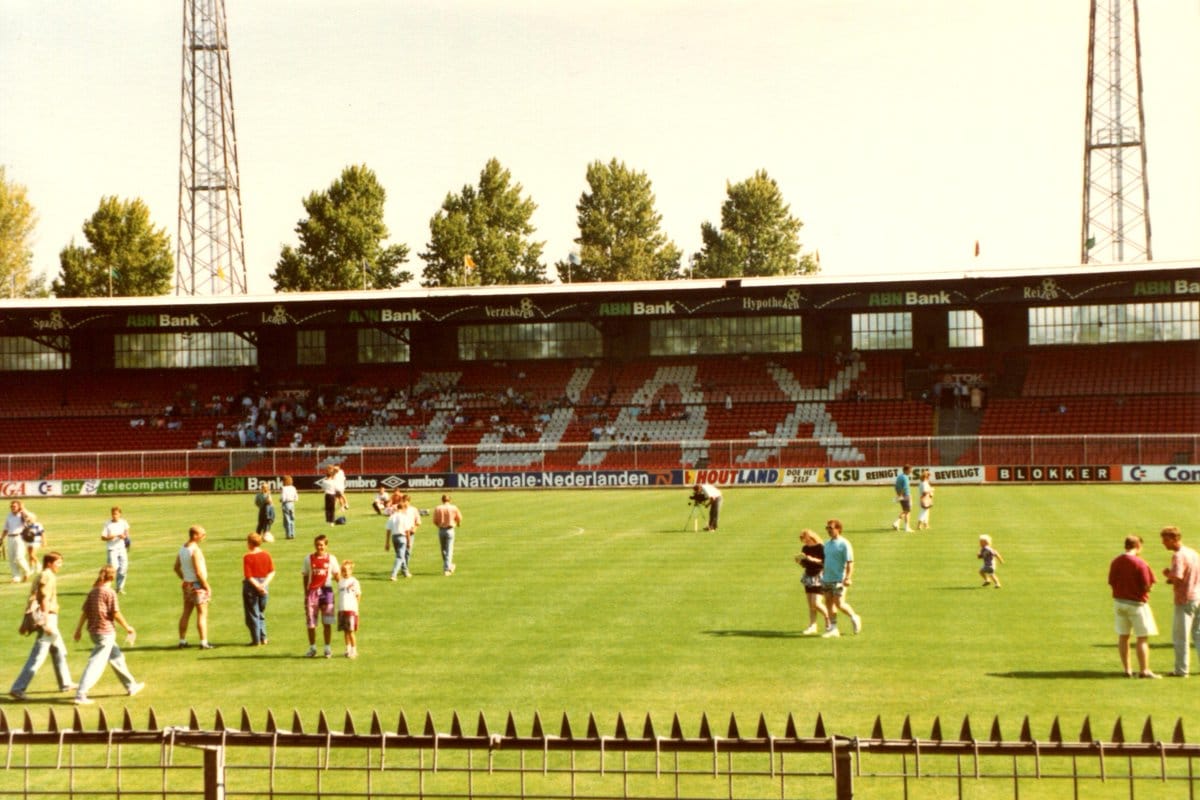 The De Meer Stadion is part of the old fabric in the Netherlands, as it used to be the former home of Ajax. Opened in 1934, this study was able to serve its purpose for more than 50 years before Ajax decided to move to a larger ground. This led to the closure of De Meer Stadion in 1996 followed by its ultimate demolition in 1998. The stadium was designed by architect Daan Roodenburgh, who was the former general director of the club.

De Meer Stadion was able to witness some historic moments during its time. The initial capacity of the ground was only 22,000, but it was a step up from Ajax’s previous ground – Het Houten Stadion. However, it was even capable of accommodating 29,500 spectators at its peak. This capacity was later brought down to 19,000, where it remained until its demolition, due to safety consideration. Due to the lack of floodlights, Ajax had to play some of the top European matches at the Olympic Stadium. The Olympic stadium had the ability to hold more than 60,000 spectators.

Apart from being the home of Ajax for a long period, De Meer Stadion also managed to host the Dutch national team on a few occasions. Most of these matches were meant for the FIFA World Cup qualification campaigns.

Even though fans will no longer be able to visit the stadium, they can still come to this area that holds a lot of history and legacy. Once in the Middenweg, fans will find that there is shortage of pubs and bars that can provide options to drink and have some delicious food. The top options would be:

This happening place manages to offer visitors with everything that they need from a trip to a pub ahead of a football match day. Apart from being able to encounter a lot of football fans whenever Ajax are playing in town, Café Kuijper also manages to offer great music, great beer, and food.

This is a place to visit when you are looking for something interesting from a trip to the pub. There is plenty of atmosphere to go along with the wholehearted staff, who are ready to go to great lengths to make sure that the visitors are best pleased.

This place is known for the endless list of beers that simply would not make a football fan walk away. There is a roomy patio that can provide a great place for hanging out with friends. Apart from the beer, this modern pub also manages to deliver in terms of coffee and food items.

De Meer Stadion was the home of Ajax for just over 60 years. The stadium was demolished soon after Ajax vacated the premises. After demolition, the area where the ground stood has been transformed into a residential area. In order to retain a bit of the history, a lot of references can be still found. Many of the street names will be a reminder of the glory days. Even though it is not possible to see the stadium in person, a visit to the area has the potential to transport visitors back in time.

Even though Middenweg area is still within the city limits, get into the place is not very difficult especially considering that it is very close to the A10. The Park De Meer is actually on the perimeter of the A10 and one has to be ready to make an exit when they approach the region. The road network in this area of Amsterdam is extremely good and conducive for driving. Once you get to the Middenweg area, parking should not be a difficulty. However, fans have to be aware about the various rules and regulations that are in place.

Ajax is very well connected and it has a number of public transport options. There is a tram line that runs through the Middenweg area. One has to get off at the Amsterdam, Brinkstraat transit stop. Get to Amsterdam by train is also not very difficult with plenty of options available from various parts of Europe. Most of the trains coming to the city will be on the high speed network.

It is no longer possible to visit the De Meer Stadion, which has been demolished in favour of the Amsterdam Arena. However, one can still visit the Watergraafsmeer area where the old stadium once stood. It is in the south-eastern section of the Amsterdam city. No part of the old stadium has been left over, as the entire area has been transformed into a residential housing section along with a park. However, there are a lot of reminiscence about Ajax, the famous clubs that they played against, and some of the iconic players who represented the club. Some of the famous street names in this region would be Wembleylaan and Anfieldroad.

Be the first to leave a review of Ajax Amsterdam (Eredivisie)!