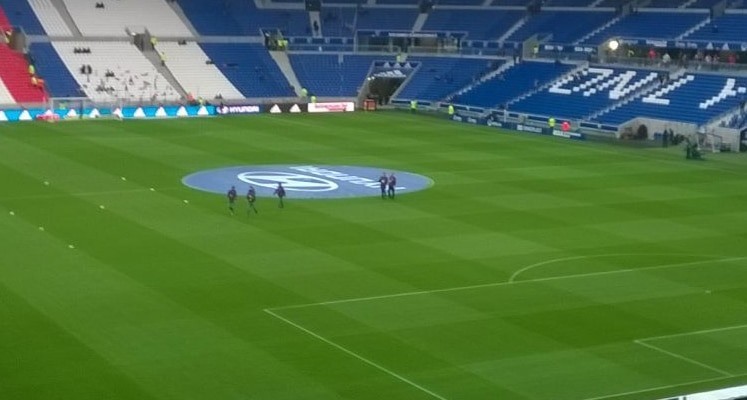 Any visiting supporter who makes the trip to the Parc Olympique Lyonnais will be in for a great experience. This is one of the top stadiums in Europe even if it is not the largest capacity. As one of the more modern stadiums, Parc Olympique Lyonnais has a huge impact in terms of the facilities being offered to the spectator. The stadium has been brilliantly designed in such a way that there is enough space to be comfortable, while there are many options to grab a bite or get a drink. The upper concourse is also very spacious and it manages to provide 360° views of the Lyon city.

As long as you are not a supporter of St Etienne, the Parc Olympique Lyonnais can make you feel welcome. There are many meeting rooms, bars, executive boxes, and banquet halls in this ground. It is certainly not short on hospitality. Even though the stadium is located a little far away from the city centre, it still manages to provide quite a lot of happening places. The stadium happens to be surrounded by farmlands and residential houses. The best places to stay would also be in the city centre rather than near the stadium.

It is a huge positive that Lyon has a number of options when it comes to hotel rooms. One can pick up hotel rooms that will cost just $ 60 per night or even ramp up the budget to take a huge apartment for more than $ 300 per night. The latter is more applicable when visiting a family, which is a highly unlikely scenario considering that Lyon’s Groupama Stadium is an extremely friendly place to visit with family. Furthermore, there are plenty of things to see in and around the city.

The task of getting to the Groupama Stadium is not very difficult considering that it is extremely well connected through different options. Furthermore, the stadium is only 10 km away from the city centre. For those trying to reach the stadium by car, there are two major options – N346 and D317. The N346 will undoubtedly be the fastest to reach the stadium, but it comes with the disadvantage of having tolls that can end up jacking the expense. For those who are planning to use the D317, the time taken to reach the stadium would be much longer but there is the advantage of no tolls. At the end of the day, it is up to the fan to decide the best route.

If you are catching a taxi from the airport, the cost could be anywhere from €25 to even €45. This is ultimately dependent on the traffic.

Once at the Parc Olympique Lyonnais, there are numerous parking options. Another advantage for those with a registered travel document is that parking does not cost anything and there are numerous options. The car park at the ground is also quite rich in options, as there are more than five major parking spots in and around the stadiums. Even though Lyon is not the most car-friendly city around, there are many solutions for parking. If you want to park near the stadium on a match day, expect to shell out around €4.50.

The availability of excellent tram service in Lyon makes it easy to reach the stadium through tram rather than a train. There are tram shuttles that are available starting from the Vaulx en Velin La Soie, Dieu Villette, and Grange Blanche. Furthermore, there are many regular lines that run on the T3 and ultimately reaching the Grand Large Station. This station happens to be only 700 m away from the stadium. For those who are seeking to reach Lyon from London, the best option would be to take the Eurostar. The total time taken would be around five hours.

If fans want to fly, there is the Lyon–Saint-Exupéry Airport to reach the city. This airport is only 13 miles away from the city centre. After getting to the airport, you can easily take the shuttle bus to the stadium or one of the many trams. Even though the tram happens to be slightly expensive compared to the shuttle bus, it is also much quicker. You would end up saving a lot of time by taking the tram. The tram service is so good that it manages to nudge ahead of the bus system, which is equally good.

The ticket prices at Parc Olympique Lyonnais depend on the level of opposition that Lyon are up against. Generally, the ticket prices would vary from €60 to €10. Depending on the calibre of the opposition and nature of the competition, there will be swings in either direction. For example, fans should expect to pay around €60 when Paris St Germain are in the town. The ticket price is also high when Lyon are up against rivals Saint-Étienne. The Champions League games also tend to result in an elevated ticket price. There are numerous ways of picking up a ticket. One can visit the several official outlets that are stationed across the city. Lyon also have a partnership with online ticketing sites and official tickets can also be purchased on the club’s website.

Lyon comes up with stadium tours for anyone interested in a detailed look at the Parc Olympique Lyonnais. For starters, there are numerous advantages like the ability to look at the press room, players’ tunnel, dugout, hospitality areas, and more. The length of the tour is approximately 75 minutes. It is interesting that Lyon provides a special stadium tour of Parc Olympique Lyonnais in English. Only one tour is available in English and it runs throughout the week.

The price for a stadium tour in English would be €19 and it includes all aspects of the stadium along with a guide. A maximum of 30 people can take part in a single tour. It covers the pitch side, lounge area, media zone, players entrance, locker room, and Megastore. The visitor can also opt for a stadium and museum tour for a combined price of €23. This package comes with the advantage of an audio guide as well.

There are also VIP tours that can be availed by fans. The added advantage would be the ability to visit the presidential lounge with special treatments. Those availing just the VIP stadium tour will have to spend €39. There are different pricing options available for fans. There are family passes where two adults and two children will be admitted with the same ticket. The subscribers also get a reduced rate advantage. There is a substantial discount available for children below 16 years, while children below five years of age get to visit for free.

The modern nature of the Groupama Stadium also makes it possible to accommodate many features for the disabled spectators. Those who want to access the disabled section will be able to make special bookings depending on the need for a wheelchair user space or easy access seating space. There are 202 wheelchair spaces that come with a companion seating option. For those who are able to use the easy access section, there are 100 reserved spaces that come with a companion seating position. There are also special parking options for disabled fans.

Olympique Lyon Fixture List (redirects you to the BBC site)

Lyon is a bustling city with many entertainment options for visiting supporters. For those who want to get a drink or two before the game or even after the match, there are many pubs and bars that are welcoming of away supporters. The top options would be:

This is an English pub with very high reviews amongst visiting fans. Even though the pub is quite far away from the stadium, fans are connected well through a number of public transport options. The staff are known for their welcoming attitude while the tasty food has picked up rave reviews along the way. Many football fans frequent this place and it results in an excellent atmosphere.

This is a pub that manages to bring together excellent food along with a great selection of drinks. Any football fan will appreciate the good collection of whiskey and beer that go very well with the football and food. The presence of a multilingual staff, who happen to be friendly and courteous, will certainly help settle down and soak in the atmosphere, which is vibrant on matchdays.

This is a bar with an Irish theme but located in Lyon. It is great place for away supporters who seek incredible atmosphere and ambience. One can also get nice drinks on offer. For those who want to experience the world of Irish bars even in France, The Antidote is a great choice.

Parc Olympique Lyonnais is one of the modern stadiums in France. It was built to host some of the Euro 2016 games. Constructed in 2012 at a cost of around €480 million, the stadium finally opened up in 2016. Now, it is the home ground of Olympique Lyon while it also hosts selected games of the French national team. The construction of this stadium allowed Lyon to move away from their former ground, Stade de Gerland.

The Parc Olympique Lyonnais is also known as the Groupama Stadium due to a sponsorship with the French insurance company in 2017.

The stadium manages to fit all the characteristics of a European stadium with a bowl style approach along with continuous seating. Even though there are four sections of the ground, the most vocal and ardent supporters of Lyon go into the Virage Sud and Virage Nord. These two groups of supporters have traditionally produced the biggest atmosphere during Lyon matches. The corporate seats are in either side of the Virage Sud and Virage Nord. It is also the place where the most executive boxes are available. The seating in these executive boxes are among the most expensive in the stadium. The East and West sections of the stadium happen to house the sedate supporters, while there are three tiers.