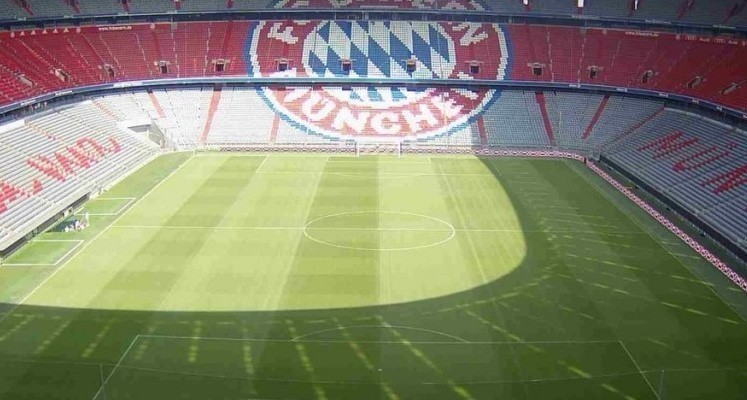 There are a number of stadium tour options at Allianz Arena, which also manages to house the largest museum for a club in the country. A fan can choose a combi-tour to go behind-the-scenes and see some of the facilities that are usually hidden from the public view – like dressing rooms, press conference rooms, players’ tunnel, and more. Once you purchase the combi-tour package, you will be given access to the Bayern Munich museum as well. This is the place where all the key historical elements of the club are kept under one roof. The entire tour should last for around one hour, but it is also recommended that you spend almost the same time in the museum section.

For fans who want to be pampered a lot, the VIP tour is the perfect option. It is possible to go the additional distance using this package, which will be able to offer an insight from the executive suite. Apart from all the inclusions seen in the combi-tour, you will also be getting access to the business club along with a glass of sparkling wine. This tour will take around 2 hours with the drinks session alone lasting for around 30 minutes. There is a sizeable difference between the tour packages, but even they are very inexpensive by standards set across Europe. The combi-tour will only cost €19 for an adult and € 11 for kids between 6 and 13 years of age. If you are eligible for any concessions, the price drops to €17. The VIP tour is priced at €29 for one person.

Apart from these tours, you will also be able to experience the likes of the club shop, where many merchandisers can be picked up.

One of the difficult aspects of going to the Allianz Arena would be securing the tickets. It can be notoriously difficult to get tickets for big matches, but attending a match of Bayern Munich at the Allianz Arena is one of the must-do activities for a football fan in Germany. Due to the fan friendly policy, it is very light and easy to attend a football match in the Bundesliga. Almost all the tickets are very easy on the pocket, but this also causes a lot of demand. Most of the entire season tickets are sold even before the 1st matches are played. Even then, one can visit the reseller market and try to secure a ticket.

On most occasions, you will be able to buy tickets for the big matches as they would be limited only for members. For other games, however, tickets will be opened for the general public around one week in advance. For the purpose of buying tickets, users must register an account. There are online tickets available to make the purchase process a lot more convenient.

The prices by Bayern Munich for a match at the Allianz Arena can be as inexpensive as €15 for a Bundesliga or DFB Pokal encounter. The most expensive tickets would be in the region of €70. There is a sizeable increment for the Champions League matches, which can be attended from €30 to €100. The prices do vary depending on the stand and tier chosen. The pitch side seats in the east and west stands are generally the most expensive, while people can get inexpensive tickets just behind the goal on both the North and South stands.

Allianz Arena is around 10 km away from the city centre. Despite being quite far away, it is very accessible through a car, as the ground is very close to the A99 and A9 stretches of the autobahn. Even then, it is advisable to input the satnav address – Werner-Heisenberg-Allee 25, München – before starting the journey. If you are using the A9, the exit would be at exit 73 München-Fröttmaning-Süd. If you are taking the A99, then you can reach the Allianz Arena by taking the exit 12b München-Fröttmaning-Nord.

The advantage of being situated away from the city centre is seen in the comfortable parking spaces. The car park for the Allianz Arena is one of the largest and it covers an incredible 9800 spaces. You should remember that parking spaces are not free and that you have to shell out €10 while exiting the park. This payment can be made through the ArenaCard, which is available in the stalls at the stadium.

The Allianz Arena can be reached by train or metro. Munich is well connected to top European cities through train, and it is not a surprise that the Munich station is one of the largest in Europe. One can take the Line 6 to get off at Fröttmaning. If you are in the old city centre, the Line 6 will take you to the Marienplatz and it is a 15 minute ride. If trams are preferred over the metro, it is possible to take a tram to Marienplatz from Ostbahnhof and Hauptbahnhof, which happen to be the largest train stations in Munich.

Due to the city being well connected with trains to several parts of Europe, it is possible to make a weekend trip through trains and then make use of the metro and trams to reach the stadium. Since Germany is also very well connected to the parts of the world with flight services, this can also be an option for fans who want to visit the Allianz Arena and watch Bayern in action.

Allianz Arena is one of the modern stadiums even if it has been around for more than a decade. You can expect top-class facilities when you visit this ground. It is one of the best destinations to watch football due to its expansive nature. The ground may lack in the personality of an old stadium, but it has all the modern conveniences. There are numerous options for getting food and drinks, while the clean concourses make for a pleasurable experience. Even though the ground is quite far away from the city centre, it remains well connected through a number of ways.

An away fan who is visiting the Allianz Arena will be put inside the third tier of the North stand. This section is very far away from the pitch, but it also results in some excellent views. The steep seating arrangement also helps in spotting the tactical battle on the pitch. If you are visiting the Allianz Arena for a Champions League night, the allocation of tickets would be just over 3000.

You should be prepared for sparse environment near the stadium, as it is far from the city centre. The lack of entertainment options aside from the football is a stark contrast to many of the older stadiums. For those who want to stay near the stadium, the options are limited. But there is always an option of staying in the city and taking the excellent public transport to the ground. There are numerous hotels in the city centre.

Unlike in major football stadiums across, German grounds do not have restrictions on the consumption of alcohol. It is commonly regarded that German soil is one of the best places to get some beer and watch football in large numbers. Even then, that does not stop away fans from seeking some of the best pubs for excellent pre-match experience. It is difficult to find many pubs close to the ground, but there are several choices in the city centre. The top ones would be:

This is an excellent choice for fans who want to get some delicious food along with beer. This is located in the city centre but you will have quick access to metro stations nearby. There are some excellent bed-and-breakfast places nearby.

Drinks, music, and sports are the key ingredients of Café Schiller, which happens to possess a large screen for showing different sports events. You will be able to come across anything from rugby to boxing in these screens. Unsurprisingly, Café Schiller is considered to be the best sports bar in the city.

This is a solid Irish bar that provides a great place for watching games that take place at the Allianz Arena. It can be one of the first choices you can consider if you do not have a ticket to the game. There is also another major reason to consider this sports bar – Guinness!

The Allianz Arena is one of the modern stadiums in world football. It has been the home of Bayern Munich only since 2005. Yet, this is one of the largest stadiums in Europe with a capacity of 75,024 for domestic games. Even though the capacity drops down to 70,000 for the European and international matches, it is still one of the iconic grounds with a modern touch. This modern status of the stadium is reflected in the ‘continuous ring style’ design, which has been chosen over the ‘English style’ that is more traditional. Even then, you will find separate sections on the ground that is well defined.

The four sections of the Allianz Arena are North Stand, East stand, South stand, and West stand. The North stand is one of the largest with a three tier design. It also holds most of the executive boxes in the stadium. In many ways, this stand would be considered as a continuous bowl of tiers that sandwiches all the hospitality boxes. Due to the larger size of this stand, the tickets are very affordable. The East stand is the largest in terms of seating capacity. The curvaceous appearance of the stand manages to hide the bulk.

The curvature of the stand also makes it possible for extra seats along the pitch side. The South stand is also known as the Südkurve and it is very popular amongst fans who tend to be very vocal. There is no separate ultras group, but different supporters group like Inferno Bavaria, Schickeria München, and Red Fanatic München feature in this stand. The West stand is regarded as the main stand since it manages to hold all the changing room, players’ tunnels, executive seats, and the dugout.

There are several disabled facilities available at the Allianz Arena. It includes 130 spots for people with disabilities to park their cars. They can also receive wheelchair access without any hindrances. Apart from accommodating the stadium tours for all audience, there are special tours available for disabled individuals. Unsurprisingly, the Allianz Arena is regarded as one of the friendly stadiums for disabled individuals. These tours are ideal for people who are on wheelchairs. It is even possible to book individual tickets. The total tour duration will be around 75 minutes and fans will be accompanied by a guide. Bayern are quite proud of this facility and it is even inspected personally by Uli Hoffmann.

Bayern Munich Fixture List (redirects you to the BBC site)

Be the first to leave a review of Bayern Munich!