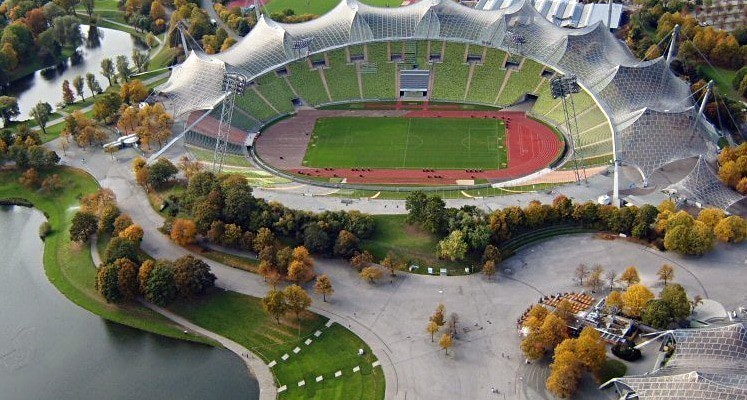 The Olympiastadion München is a ground that was constructed as a flagship destination for the Olympic Games in 1972. However, the ground managed to gain prominence when it was shared by rivals Bayern Munich and TSV 1860 Munich for a lengthy period. The duo ended up sharing the ground for more than three decades. During this period, the stadium has also witnessed a large number of major events that were hosted for different organisations.

The ground started out with an initial capacity of 80,000 and it was crucial behind its ability to host World Cup finals and more. This stadium capacity was later brought down to just under 70,000 by taking into consideration the various safety parameters.

The Olympiastadion München has a spectacular construction going on with the iconic roof structure. The recent transformation of the stadium’s usage has led to a lot of culture being brought into the window.

The favourable location of Olympiastadion München makes it an extremely easy spot to reach by car. The ground is located only 5 km away from the centre of Munich and it is in the northern part of the city. It is situated very near to the iconic destinations like BMW Welt. Some of the key roads that lead to the stadium would be the A9, A92, A94, A8, A96, and more.

Once fans get to the stadium, they will be able to park without any difficulties thanks to the abundance of spaces available despite being in the city centre. There is a parking fee of €5 per day. If a group of fans take a bus to the ground, there is a different fee applicable. The buses would be charged at €20 per day, while fans can also bring a camper van to the ground for a similar charge. For those who are ready to park at the Olympic Ice Sport Centre, there will be an hourly charge or a daily rate of €12.

The city of Munich is well connected with trams and U-Bahn, which is the metro of the city. It is very easy to reach the stadium through the U-Bahn, as it is extremely fast, quite cheap in the pocket, and does not involve any parking fees. The Olympiazentrum the station is only a 10 minute walk away from the stadium and this station is on the orange U3 line that goes straight into the city centre. One can get aboard the U3 line by using the Marienplatz or Odeonsplatz. From here, the journey takes only 10 minutes. If you happen to reach the city of Munich through the Hauptbahnhof station, which is the primary railway station of the city, there will be connectivity through U1 line. A change can be made at the Odeonsplatz station.

Another approach would be to use the Westfriedhof station, which is only a couple of clicks away.

Someone who is visiting the Olympiastadion München will be exposed to a lot of history considering that this is the ground that has hosted the likes of the World Cup, European Super Cup, European Cup final, Champions League final, and so on. In fact, the ground has been responsible for hosting the European Championships, FIFA World Cup finals, and multiple instances of the European Cup finals. Olympiastadion München has had the privilege of hosting three European cup finals – in 1979, 1993, and 1997. Now, the stadium is playing host to some of the games of Türkgücü München, who have been promoted to the 3.Liga.

One can see the magnificent Olympiastadion München from close quarters thanks to the presence of self-guided and guided tours. Both are quite different in terms of the length and cost. The guided tour will be for around one and it will include the access to the dressing rooms and pitches that were previously a mainstay of the ground. One can also get a complete view of the stadium by climbing into the Olympic Tower, which is at a height of 291 m. A number of packages are available depending on the preference of fans. One can even schedule a roof climb for a lot of thrill and adventure while still being able to soak the atmosphere of this historic ground. There are also teambuilding exercises available if users are interested.

One should check with the stadium about the availability of the tours, which can be open at different times of the day depending on the season – Winter or summer. An online link is also available on the official site for keeping tabs with the upcoming bookings and tour dates. The guided tour costs €8 while the self-guided tour will cost €3.50.

Be the first to leave a review of Olympiastadion Munich!