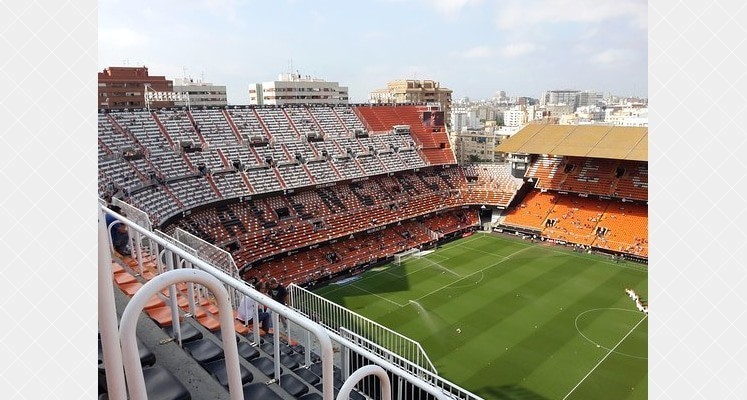 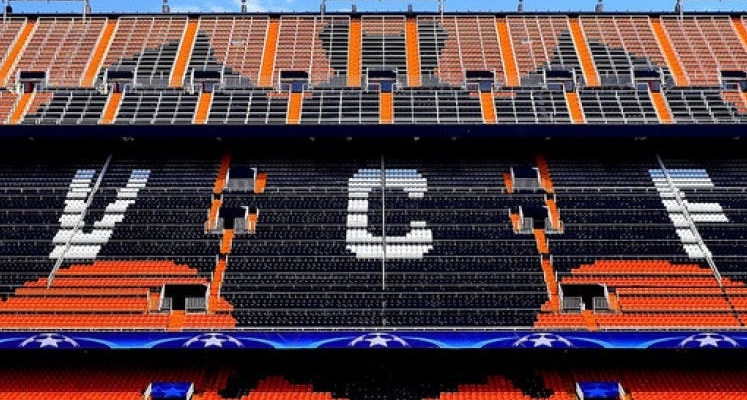 Even though the match days do not come around often, you can take a look inside the Mestalla on any day of the year thanks to the presence of stadium tours. As one of the historic stadiums in the country, there is a tremendous amount of interest in having a closer look at the Mestalla and its many features.

A guide will accompany you as part of the package. They will be able to provide titbits and information about the club's history and the key moments in the stadium so far. The stadium tour at the Mestalla is substantially cheaper compared to the prices charged at other stadiums.

The tour is priced at €6.50 for one person, but this price is applicable only for a member. For non-members, the price for a stadium tour would be €11.50. Even that can be termed as very reasonable, but there are also certain conditions that will help you gain access to the tour at a reduced fee of €9. This category would largely be applicable for pensioners and unemployed fans.

The tour will last for around 45 minutes and you will be receiving access to every key aspect of the stadium – including the changing rooms at the press conference rooms. If you are trying to access the stadium tour on a matchday, there may be some restriction access.

The biggest advantage of these stadium tours would be the availability in three languages – Valencian, Spanish, and English.

The Mestalla uses the variable pricing method that is very common in top stadiums across Europe. The ticket price will change on a regular basis depending on the opposition. If the likes of Eibar are visiting the Mestalla, you can expect to pay around €15 for a ticket. However, this would jump to €60 if Real Madrid or Barcelona are visiting the ground. Furthermore, their ticket prices would change depending on where you want to be seated. The seats just behind the goal are among the cheapest, while the seats in the stands on the pitch side will be expensive.

Valencia may have undergone financial trouble in recent years, but there is a loyal group of supporters who have continuously kept the occupancy levels in the stadium. The tickets are in high demand throughout the year, but you should be able to get one for the upcoming match if you book early. There are many ways of getting a ticket and using the club's official site is one of them. There are also tickets available in the club shop.

One should also be aware that ticket prices do depend on the seating place. Due to the strong fan following that the club enjoys, most of the tickets are sold to members. It can be difficult for fans to secure tickets for big matches and local derbies.

A major advantage with the Mestalla is location, as it is within the city centre. Even though the club planned to move to a new stadium in the north-west region of the city, it is yet to materialise. Even though the location can be a bonus in terms of entertainment options, it can be difficult to reach the ground on match days. This is especially true when a major match is just around the corner.

For those taking the car, look for the V21 and then step into the V15. These will be able to take you to the stadium without any hiccups. One of the main reasons to try and avoid taking your own vehicle would be the lack of parking spots. One has to park on the streets whilst being careful not to break the law.

If you still face any difficulties in driving to the stadium, it is recommended to use the SATNAV with the following address:

The taxi can be a great option if you do not want to stress yourself with the driving process. There are taxis available in plenty. For someone heading from the airport to the stadium, the taxi fare would be around €18 to €25 depending on the traffic. The journey will take around 20 minutes.

It can take around 14 hours to travel from London to Valencia through a train. It depends on the type of train that you opt for. Despite the time, it is extremely easy to rea Valencia through the rail network. Once inside the city, you will find that there are many metro lines that connect with the stadium – considering its location in the city centre.

After heading into the city centre, you have to reach the Aragon Station, which is on the Line 5 of the Metro. It will be a pleasant surprise that the stadium is right in front of the station. Just like in any major city, the metro can be a perfect option for those who want to avoid the stress of travelling while still keeping costs low. The advantage of a metro station being located very close to the stadium makes it the best choice for visiting fans. If you happen to face any problems with this mode of transport, there are many maps located at every station.

if you also want to take the bus, there are several bus stops that are located within walking distance of the stadium. Some of them would be numbers 10, 12, 32, 41, and 79.

Only can also use air travel to reach the city. Valencia-Manises is the top airport in the region and it is designed to accommodate travellers who want to visit Valencia. The airport is rather close to the city. it is just 10 km away from the stadium.

The away fans go into the north-east section of the stadium and this is especially the case during European games when the number of travelling fans is greater than the La Liga games, where fans do not travel to away games in huge numbers. Once you step into the ground, you will be greeted with the imposing nature of the North and South stands.

You may not have much about safety considering that many safety barriers are installed due to the steep nature of the stand. The ground can get noisy during local derbies and the atmosphere is something to savour in such moments. The less allocation far away supporters means that you have to punch above their weight to be heard. Despite being rather old, Mestalla has received many facelifts over the years and you are likely to encounter a modern stadium.

There are plenty of options for enjoying Valencia’s nightlife or pre-match excitement. It is very easy to stumble across an excellent bar, cafe, or restaurant. There are pubs located throughout the city but Barrio del Carmen is one of the best destinations for nightlife in the city centre. You can come across a trendy crowd, which is looking to capitalise on the presence of many clubs and bars. Some of the top options in this neighbourhood would be Blue Iguana, Café Infanta, and Johnny Maracas. For someone focused on the matches, the best pubs would be:

If you are heading towards the stadium, a great option to pop into would be the Bar Mestalla. Even though the number of TV screens are limited, there is always some football going on. Since the bar is also located very close to the stadium, it can be a great pre-match stop. You can savour some freshly made food and local spirits in good numbers.

For those hoping to catch live games, the BrassaSport Valencia is a great choice. The food is tasty and they go well with the assortment of drinks. Apart from football, this place also comes up sporting action from F1 to football. Due to the presence of many screens, you will not be out of touch with the sports action. Besides, you can find some incredible atmosphere at this place.

The idea of finding an Irish bar in a distant land can be surprising, but this is another great option for chilling out and watching some football. Since this pub is not far away from the city centre, it can be a great place to find lots of entertainment. All the top entertainment options are within a short throw away.

The Mestalla, which is the home of Valencia CF, is one of the unique stadiums in mainland Europe. It is quite unique due to the mixture of European and British styles. You can spot a bowl style, which is predominant in European stadiums, being mixed seamlessly with four individual stands, which is quintessentially British. There are four sections – Gol Norte, Gol Sur, Av Aragon (East), and Av Suecia (West).

Gol Norte – This is one of the iconic aspects of Mestalla, as it is a very steep seating arrangement on the north side of the stadium. The pictures certainly do not do justice to the stand and it will certainly be an imposing element once you step into the stadium for the 1st time. This steep seating arrangement is also one of the factors behind the imposing nature of Mestalla. This north stand is also the place where the fans are housed in the eastern corner.

Gol Sur – This is a mirror image of the Northern stand, where away fans would be placed. The South stand also hosts the name of the club on the seats with contrasting colours. If a small section of the Northern stand is used to host the away fans, this southern section is meant for the most vocal Valencia fans.

Av Aragon (East) – Despite being the largest section of the stadium, it is not right to consider this section as the main stand. It manages to seamlessly mix with the goal ends of the North and South stands to provide the bowl-style image that is very common with European stadiums.

Av Suecia (West) – This section is regarded as Mestalla’s main stand. It comes with all the changing rooms, players’ tunnels, and dugouts. Ironically, this is also the smallest part of the stadium, but fans who are seated here get the advantage of a roof protection. This can be very handy on the few occasions when it rains in Spain.

If you want to know more about the facilities available for the disabled, you can directly contact the club.

Valencia CF Fixture List (redirects you to the BBC site)