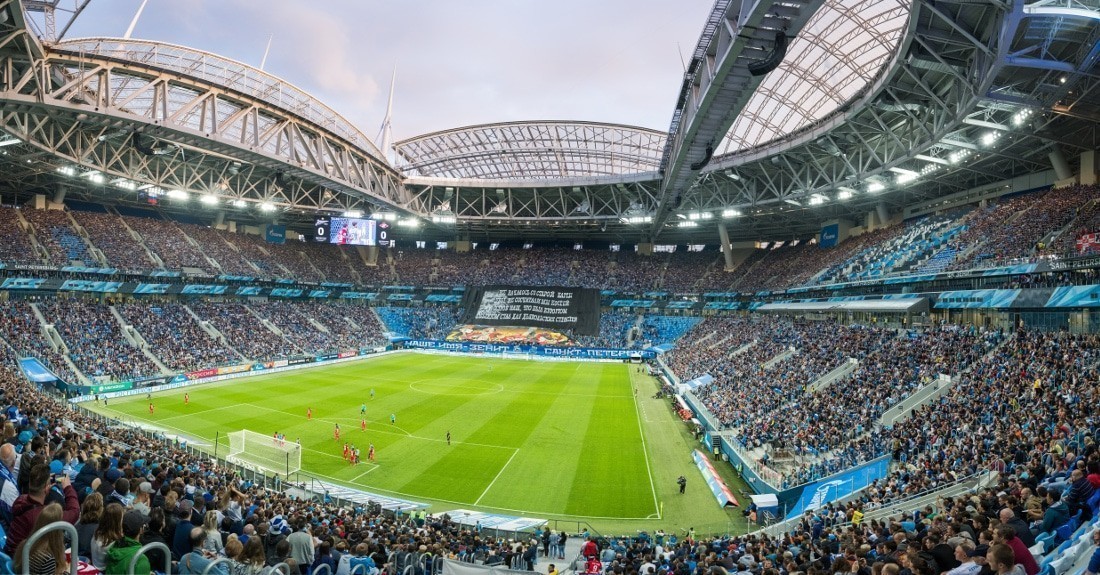 The Gazprom Arena, which is also known as the Krestovsky Stadium, is one of the most expensive stadiums in the world. Built at a cost of more than $1 billion, the stadium eventually opened in 2017 after a number of delays and sponsorship issues. Now, it is one of the largest stadiums in Europe and it is classified as a category 4 stadium by UEFA. Set on the island of Krestovsky, this stadium manages to offer several new experiences for a football fan like the retractable roof and retractable pitch.

In terms of design style, Krestovsky Stadium is on par with any other European stadium with its bowl approach, which makes it look continuous without any break in the sections. Yet, there are four different sections with each having two tiers. The upper tier comes with the ability to seat 46,000 fans, while the lower level offers the chance to seat 22,000 individuals.

Krestovsky is one of the posh neighbourhood in St Petersburg. It manages to have plenty of restaurants, bars, and options for an excellent nightlife. All these are elevated to a higher level by the waterfront and parklands that are available in plenty. Some of the best pubs and bars that are located near the stadium would be:

This can be a funky destination for fans who are seeking for a lot of entertainment from their visit to Zenit St Petersburg. A big advantage of this place would be the live football on offer. The crowd coupled with the excellent food choices make it a great place to catch a game of football. Furthermore, live music is also hosted on a regular basis so that anyone with a party mood can enjoy to the maximum.

This is a destination that focuses on all sports rather than limits itself to just one or two sports like football and rugby. You can expect to find a number of options to drink and watch sports content thanks to the presence of many TVs that are dotted around this place. The presence of several pool tables and drinking options make it a must-visit even when football is not on.

As its name suggests, this is a generic sports bar with a greater affinity towards rugby rather than football. Still, it can be an excellent option for trying to get a drink and there are plenty of TVs that are available at this place for watching a lot of live events. One can also take advantage of the plethora of sports fans who descend into this place by engaging in a game of pool. Even though it is in the centre of the city, it would only take around 30 minutes to get to the stadium with the car. There is plenty of memorabilia around so that the atmosphere and ambience levels are ramped up.

The Gazprom Arena has been under construction for a lengthy period of time. The noise and atmosphere levels created by supporters are extremely good considering that Zenit St Petersburg are one of the well-supported clubs in Russian football. If you are visiting the ground during wintertime, it is likely that the retractable pitch and the roof can be seen in action. There is also a snow melting feature that is placed on the roof membranes. All these would ensure a comfortable game experience for spectators. Furthermore, there are few stadiums that can provide a modern experience like the Gazprom Arena.

If visiting supporters wants to experience Gazprom Arena in luxury, they can do so with the help of 104 skyboxes that are designed to offer the best in luxury. Besides, there are eight restaurants and snack bars in the facility.

Gazprom Arena happens to be located on the Krestovsky Island, which is located to the north west of the city. This stadium is around 8 km away from the centre of the city – the Palace Square. The idea of driving from other European countries can be ruled out unless you are looking for a remarkable adventure. This is due to the enormous distance involved in covering the whole journey. For example, a fan who is coming from London will have to end up driving almost 1800 miles and passing through seven countries in the process. Ideally, those who are trying to drive and get to the stadium will be from St Petersburg. In this case, the travel is not very stressful since you may find that the ground is located close to the 3C Western High Speed motorway.

There is no problem when trying to park a car, as 240 slots are available inside the stadium. A land that is located near the stadium will be providing almost 2800 spaces based on need. If you want to take the taxi to the ground, the ride will cost around 800 rubles and it will take 30 minutes from the city centre.

The best way to reach Zenit St Petersburg might not be a train – especially from the western part of Europe. This is a surprise considering that St Petersburg is not one of the largest cities around. This is due to the extended time that you have to spend, as it would take around two days to finish the journey. After getting to the city, however, metros and other public transport will be the crucial mode of travel.

One of the fastest ways of getting to the stadium would be the metro, which involves getting to the green line and reaching the Novokrestovskaya station. This station is only 20 minutes away by walk to the stadium. If a fan is trying to reach the stadium from the Primorsky district, they have to take the purple metro lines that would reach the Krestovsky Ostrov station, which also has many other public transport options in the form of bus stops. One can take buses 25a and 131 to reach the metro Krestovsky Ostrov. The buses that would take fans to the Morsky Avenue are 10, 14, 25, and 46.

If you do not mind a slightly slower form of travel, the trams are a great option. These are able to take you very close to the stadium.

The tickets for accessing Zenit St Petersburg matches can be purchased online, which would be a better option rather than visiting the stadium itself. The price of the ticket depends on the opponent, competition, location of the seat, and many other factors. A fan can expect to pay around 300 rubles for visiting the stadium and getting seated in the upper tier. If a central seat is of preference, then the ticket price would shoot up to 2300 rubles. The lower-tiers in the stadium will be able to offer seats at a price of around 700 rubles to 1700 rubles.

Krestovsky Stadium offers enough attention to disabled spectators with a range of features that have been placed right from the construction process. There are special lobbies, ramps, and elevators that are available for disabled visitors, who can also make use of the service vehicles for getting in and out of the ground. There are various warning indicators which are placed across the ground for the safety of such individuals. A total of 560 seats have been allocated to individuals with less mobility.

Gazprom Arena frequently runs tours that are a great way of getting to know the stadium from a much closer look. It will not be a surprise that many fans who visit the Gazprom Arena tend to show a lot of interest in looking at the $1 billion stadium’s secrets. There are tours organised by Zenit St Petersburg that can help achieve the same. For groups that range from just 5 to even 50 people, tours will be arranged. These tours will be able to provide a greater insight into the ground, its workings, and facilities. This would be truly fascinating considering that Gazprom Arena is one of the biggest stadiums in the world with unique features like a retractable pitch and roof.

Be the first to leave a review of Zenit St. Petersburg (Russia)!