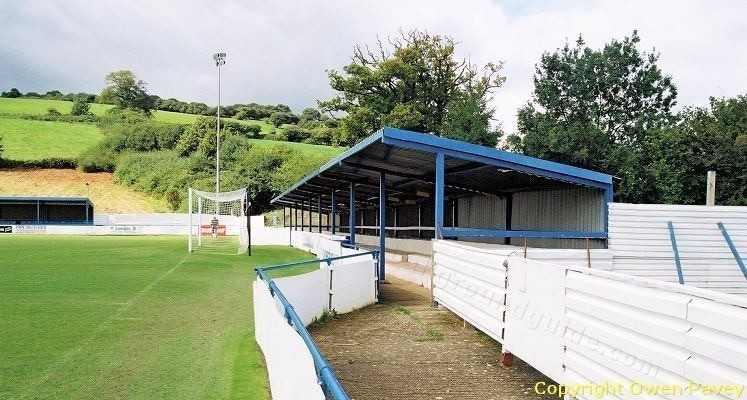 There is the Club Lounge bar at the ground which welcomes away supporters. Otherwise, half a mile away at the bottom of Llanelian Road (in the direction of the A55) is the Marine Hotel and pub. If you turn right at the Marine Hotel and go into Old Colwyn (along the Abergele Road) then after a quarter of a mile you will reach the Red Lion pub which is listed in the CAMRA Good Beer Guide.

If arriving by train or decide to go into Colwyn Bay before the game, there near to the railway station on Princes Drive is a Wetherspoons outlet called the Picture House, which is also featured in the CAMRA Good Beer Guide. If walking up to the ground from the railway station along the Abergele Road (A547), then there is the Park Pub which has been recommended to me. This pub also shows Sky Sports.

The ground is situated a couple of miles out of Colwyn Bay. Set into a hillside it has a pleasant rural setting. On one side are two simple looking covered seated stands, that sit each side of the halfway line. Only a few rows high they have a number of supporting pillars running across the front of them. Opposite is the new all seated East Stand which was built on a former open terrace in 2013. Although only five rows high, it is covered and is tidy looking, having glassed areas at the back for press etc.. It doesn't have any supporting pillars which is good, however there is the base of a floodlight pylon situated right in front of it, near the halfway that could impede your view. At the Clubhouse End is a small flat open standing area, whilst opposite there is a small covered terrace. This North Terrace runs for around half the width of the pitch and sits directly behind the goal. It has a number of supporting pillars running across its front. The stadium is completed with a set of four modern floodlights.

The  Llanelian Road ground has been renamed the Four Crosses Construction Arena in a corporate sponsorship deal.

After playing for a number of years in the English Leagues, Colwyn Bay in 2019 joined the Cymru North, which is part of the second tier of Welsh Football.

Just before reaching Colwyn Bay, leave the A55 at Junction 22 (signposted Old Conwyn/Hen Colwyn A547). LFrom the A55 (North Wales Expressway). Leave the A55 at Junction 22, sign posted Hen Golwyn/Old Colwyn and at the bottom of the slip turn left towards Old Conwyn. You will then reach a roundabout (with the Marine Hotel and pub on the left hand side) where you take the second exit onto Llanelian Road in the direction of  Betws-yn-Rhos. The ground is half a mile further up on the right. There is a car park at the ground which costs £2 per car, otherwise street parking.

Colwyn Bay Railway Station is situated just under two miles away from the ground. It is served by trains from Manchester Piccadilly, Crewe and Birmingham New Street. Either grab a taxi or if you fancy walking (but please note that most of the route is uphill):

As you come out of the station entrance turn left and and end of the station buildings you should see a pedestrian pathway/cycleway go down to the left. Take this pathway down to the promenade which runs along the sea front. Turn right along the promenade and after about half a mile turn right (signposted Old Colwyn). Proceed under the A55 bridges and continue straight on up the hill. At the next roundabout that you reach take the second exit (by the Marine Hotel and pub) onto Llanelian Road in the direction of  Betws-yn-Rhos. The ground is half a mile further on uphill. located on the right hand side.

Map showing the location of the Llanelian Road Football Ground

Special thanks to Steve Durham for providing a photo of the new East Stand and to Owen Pavey for the other photos of Colwyn Bay FC.

Be the first to leave a review of Colwyn Bay!