It is fitting that the sport-mad city of Galway has a soccer team in the top division of the League Of Ireland  once again. Eamonn Deacy Park, which is owned by the Galway & District Football league has a renowned quality playing surface, making it one of the most well used community pitches in Ireland. The ground is sometimes referred to as Terryland Park, as it located on the edge of the Terryland residential district. It backs onto open fields and is situated around one and half miles, North of the City Centre. Pride of place at the ground is taken by the relatively new 1,500 seat cantilever Main Stand. Opened in 2007, this stand sits astride the pitch centre line on the spacious South side of the ground and has 15 rows of seats elevated above the new club Offices. Even the lowest row of seating offers an unobstructed view at least two metres above the pitch. White seats spell out GALWAY across the stand amongst a background of maroon seats.

Opposite this stand, on the North side is a more conventional stand. A former terrace converted to seating, it is normally divided on matchdays between home and away supporters. Although the stand has fewer rows of seating with shallower steps, than the Main Stand, it runs almost the full length of the pitch and contains 1,800 seats beneath a solid low roof. The television gantry mounted on its roof is a fairly recent addition. Given the mixed Anglo/Gaelic heritage of the city it is appropriate that the Gaelic City & County name of GAILLIMH is spelled out in the new seating deck and repeated on the club crest.

To the East end of this stand is the scoreboard end, a three metre wide flat standing area, boarded by a tall breezeblock wall, backing onto the club car park. To complete the picture, backing onto Dyke Road is the clubhouse end, a wedge shaped area which offers a combination of flat standing, open seating and a clubhouse which features players changing rooms at ground floor and a first floor glazed viewing lounge.

Away supporters are allocated around 1,000 seats in the North stand.  The stand is shared with home fans allowing both sets of fans to get a good atmosphere going. The stand does however have a number of columns, plus a protruding floodlight pylon which may impede your view. It is uncertain if away fans are allowed to stand at the scoreboard end.

Where to eat and drink?

As the ground sits on the edge of a housing estate and open farmland there is nothing of note in the immediate surroundings. There is a large shopping centre and retail park further south along Dyke Road, around 10 minutes walk away, where there are plenty of eating establishments to choose from.  There is of course plenty of pubs on offer in Galway City Centre, which is  around 25 minutes walk along the same road.

Sean Rafferty informs me; ‘As regards pubs in Galway town centre then I would recommend the Dail Bar on Cross Street which is the official pub sponsor of Galway United. The Dew Drop Bar on the same road and the Quays Bar on Quay Street are two other good pubs’.

Follow the M6 from Athlone to Junction 19 where the road becomes the N6. Continue past the R336/N17 Junction on the north outskirts of the city and follow over the N84 roundabout, passing by the Menlo Park Hotel. At the end of the road turn left into Dyke Road. The ground is on the left hand side, with a narrow driveway leading to the club car park.

Follow the N18 from Gort, connecting into the N6 on the eastern approach to the city. Continue past the R336/N17 Junction on the north outskirts of Galway then as From the East above,

Follow the N17 from Tuam/N63 from Roscommon. At the N6/R336 Junction turn right and follow the A6 round the north outskirts of the city. Continue over the next N84 roundabout, passing by the Menlo Park Hotel, then as From the East above.

There is a sizeable car park at the ground which is free. However as it only has narrow driveway for entrance and exit, this can sometimes lead to a bottleneck after the match has ended.

Galway receives a good train service from Dublin Heuston, roughly 1 train per hour between 9am and 5pm Monday to Saturday. Journey time is around 2 hours 20 minutes, with stops at Portarlington, Tullamore & Athlone on the way. Fans traveling from Cork can also reach Galway by changing at Limerick Junction and catching the Limerick-Ennis-Gort-Athenry branch line however services only run every two hours. Travel time from Limerick Junction to Galway is 2 hours 30 minutes. Unfortunately there are no train services back to Limerick or Dublin after 19.20 in the evening.

Galway Railway Station is located just over a mile away from the ground and is around a 20-25 minute walk. When you come out of the Railway Station you will see Eyre Square Public park direct in front of you. Walk straight up to the top of the park then walk past the sculpture and flagpoles then cross the road in front of the Bank of Ireland. Walk to the right hand end of the Bank of Ireland building and follow the next left turn into Eyre Street. After less than a minute turn right next to Debenhams into Bothar Irwin then at the end of the road turn left into Bothar NamBan. Follow the road for around 3 minutes then at the slightly staggered R866 crossroads continue walking into straight into Dyke Road. Continue walking on this road for 10 minutes, passing a retail car park and Cinema Complex. After a couple more minutes the road then passes beneath the R338 Dual Carriageway and narrows on the approach to a small bridge over a river. The main entrance road to Eamon Deacy Park is on the right hand side.

Bus Eireann 20 Dublin Busaras-Galway follows a similar route as the train, with regular hourly services. The journey time is around 3 hours 25 minutes, however the last bus back to Dublin leaves 8.30pm, with the earliest following day morning service departing Galway at 06.30am. Howerver there other additional services provided by GoBus and Citylink.

In addition Bus Eireann 064 links Derry to Galway via Ballybofey-Donegal-Sligo & Tuam, journey time is around 4 hours 30 minutes, though again the last return journey is at 8.15pm with the next bus departing the following day at 6am.

* Concessions apply to Senior Citizens and Students. The Club may ask to see proof of status.

Map Showing The Location Of Eamonn Deacy Park In Galway

Special thanks to Vinny O’Connor for providing the photo of the Comer (New) Stand.

Be the first to leave a review of Galway United! 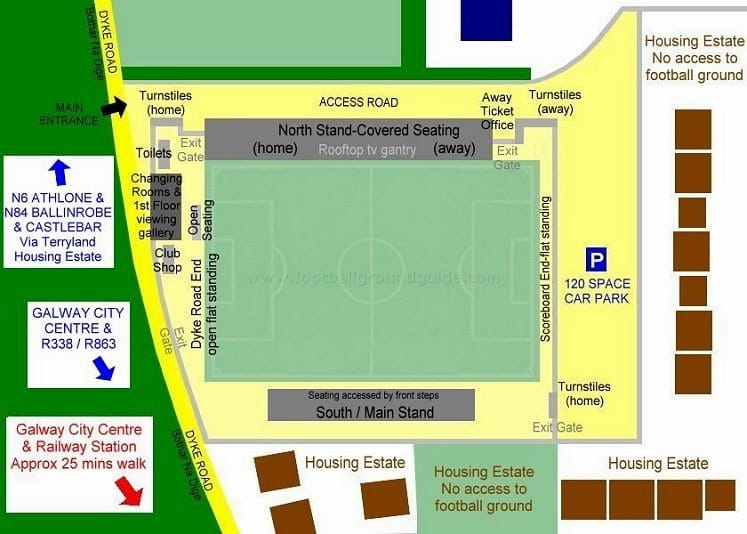