Ewen Fields has a nice combination of new and old, giving it some character. The small Main Stand at one side of the pitch is modern and is seated and all covered. It was originally built in 1986 and extended in 2000. It has no supporting pillars and runs for around a third of the length of the pitch, sitting astride the half way line. It has an unusual looking roof, with a couple of floodlight pylons situated on top, giving it an individual look. Mounted on the back wall of the stand is a small electric scoreboard. On one side of the Main Stand is a small old covered terrace, affectionately known to the local fans as the ‘Scrattin Shed’, whilst the other side is unused. Opposite is another new looking stand called the Leigh Street Stand. This small covered terrace runs almost the full length of the pitch and is where the team dugouts are located (even though the dressing rooms are on the other side of the ground). At one end is the Walker Lane End, which is another small covered terrace. Opposite is the intriguingly named Tinkers Passage End. This very old looking covered terrace that has a number of supporting pillars running across the front of it. At the start of the 2016/17 season the Club installed an artificial 3G pitch.

The ground is also used for Manchester City Reserve games. In 2010 the overall look of the ground was almost completely changed as essentially what had been a predominantly red coloured stadium was changed to blue (even the red seats in the Main Stand were replaced). The stadium was also re-branded with Manchester City sponsorship. Although I can appreciate that this has been an additional source of income for Hyde, it is a shame that part of the Club’s identity has been sacrificed for it.

Hyde United currently plays in the BetVictor Northern Premier League Premier Division, the seventh tier of English football. This is at Step 3 below the Football League and one League below the National Leagues North and South.

If segregation is in force then away fans are housed in the Tinkers Passage End, where around 1.200 fans can be accommodated. This small covered terrace, is set back from the pitch having a flat hard standing area in front. It also has a number of supporting pillars. John Womersley a visiting Barrow fan adds; ‘The away end has a football goal net type structure over the entire 18yd box up to, and above roof stand height, giving an 80’s fence type feeling to watching a match. I noted that the home end didn’t have the same. On the plus side the stewarding was good and friendly.’ Food available inside includes; Cheeseburgers (£3), Burgers (£2.50), Hot Dogs (£2) a selection of Pies (£2) and Chips (£1.50 or with gravy £2).

The more vociferous Hyde fans tend to congregate to the left of the away end in the ‘scratching shed’, allowing plenty of banter to take place. Normally visiting supporters are not allocated any seats in the Main Stand.

There is a Social Club at the ground which normally allows in away supporters. Otherwise five minutes walk away from the ground is the Gardeners Arms pub on Lumn Road. A little further away on Mottram Road is the Sportsman Inn, which is listed in the CAMRA Good Beer Guide. It sells beers from the Rossendale Brewery as well as guest ales. Hyde Town Centre is around a ten minute walk away where there are plenty of pubs to be found. The Cotton Bale on Market Place is a Wetherspoons outlet which is also listed in the CAMRA Good Beer Guide.   Round the corner from the Globe Pub is a handy fish & chip shop.

Leave the M60 at Junction 24 and take the M67 towards Sheffield. Leave the M67 at Junction 3 and at the traffic lights at the top of the slip road, turn right towards Hyde Town Centre. At the second set of traffic lights turn left onto Mottram Road. Pass a Morrisons store on your left and at the first set of lights turn right onto Lumn Road. At the top of the road there is a T-junction where you turn left onto Walker Lane. The entrance to the ground is down on the left just past Hyde Leisure Pool.

Car Parking
There is a car park available at the ground which is free. Additionally there is parking available at the Leisure Pool, which costs £2 per car. A residents only parking scheme operates in the vicinity of the ground so street parking has to be away from the stadium.

The nearest railway station is Newton for Hyde, which is around half a mile away from the ground. It is served by regular trains from Manchester Piccadilly. It should take around ten minutes to walk. On exiting the station walk down the hill down the bottom of the road. Cross over Sheffield Road and go straight up Castle Street in front of you (please note that both Sheffield Road and Castle Streets are both back streets in an area of industrial unites). At the top of Castle Street turn left onto Commercial Brow which becomes Halton Street, after crossing the motorway bridge. At the end of Halton Street at the T-junction turn left onto Mottram Road. Then take the first right into Grange Road North. Then take the next right into Miles Street and the ground is down at the bottom of this street.

Book Your Local Hotel Accommodation And Help Support This Website

If you require hotel accommodation in Manchester then first try a hotel booking service provided by Booking.com. They offer all types of accommodation to suit all tastes and pockets from; Budget Hotels, Traditional Bed & Breakfast establishments to Five Star Hotels and Serviced Apartments. Plus their booking system is straightforward and easy to use. Just input the dates below that you wish to stay and then select from the map the hotel of interest to get more information. The map is centered to the football ground. However, you can drag the map around or click on +/- to reveal more hotels in the City Centre or further afield.

If there is anything that needs to be updated or if you have something to add to the Ewen Fields Hyde United then please email me at: contact@footballgroundguide.com.

Special thanks to Simon Jenkins, for providing the photos of the Ewen Fields football ground for this page. 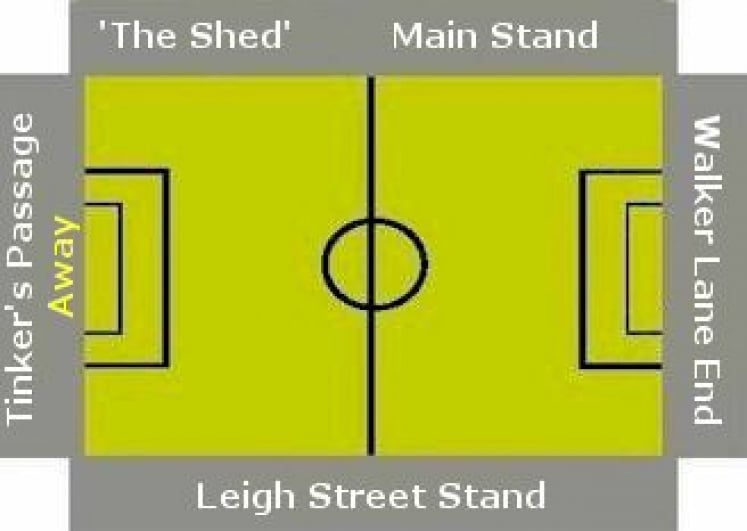