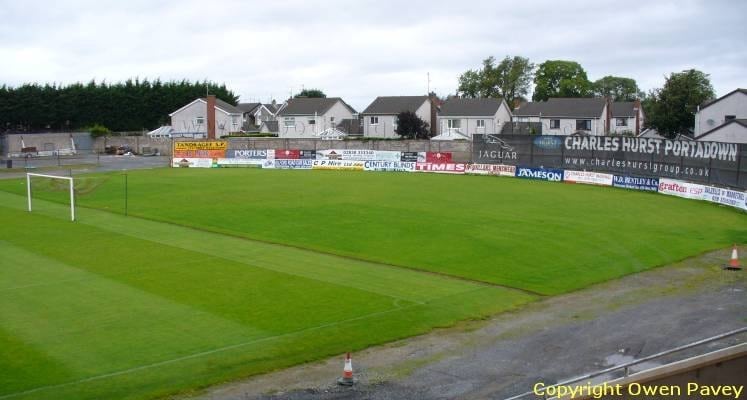 Shamrock Park is located one mile west of Portadown town centre, close to the A3 Armagh Road. The main entrance to the ground on the corner of Brownstone Road boasts an impressive new brick facade with the club crest high above a gateway, replicating a feature of the old Shamrock Park .The ground is in a transitional period at the moment, being halfway through an ambitious rebuilding program which has seen the removal of terracing and a speedway track.

Looking at the ground from the new Met stand on the east side of Shamrock Park, to the left is the new south stand which replaced a curved open terrace in 2006.  This impressive stand has 1,000 red plastic seats beneath a “goalpost” steel roof structure, takes up the width of the penalty area, and is raised slightly above pitch level. Unusually the stand sits in a similar  position as the former south terrace, leaving a gap of several metres behind the goal where the speedway circuit used to be. The curved line of the former terrace fencing has been repositioned behind the goal. Despite the distance from the touchline, the spectators have an excellent unobstructed view of the pitch. Looking to the far right from the main stand the shape of the old ground layout becomes more obvious, with the former speedway track now buried beneath the grass of the new training pitch which sits behind the goal.

Looking opposite to the west side of the ground, the old Main Stand sits proudly on the pitch centre line, with 1,000 modern red plastic seats on a raised seating deck. There are a number of columns to this stand which may impede your view. Players emerge from dressing rooms beneath the stand’s seating deck. A pair of modern plastic dug outs sit either side of the players entrance. Although the stand still maintains its distance from the pitch behind the former speedway track, the elevated seating deck ensures a good view of the action. Finally turning to the MET Stand, this impressive cantilever stand was opened in 2008 and  has 1,800 red plastic seats. This new structure replaces a covered terrace. As with the new south stand, the base is raised slightly above the pitch level and sits behind the outline of the former speedway track. It should be noted that the views from this stand and the Main Stand are obstructed in part by the set of pitch side floodlight pylons. Hopefully these will now be removed, as the stadium has now been fitted with a new set of four floodlight pylons.

Visitors enter the ground through the main entrance gate on the corner of Brownstown Road ,a new turnstile block to the right leads out onto the new South Stand. Views from the stand are excellent and the cantilever roof  is both low enough to keep out the rain, and acoustically ideal for getting a good atmosphere going.

There is little on offer in the immediate vicinity of the ground however there is plenty of pubs in Portadown Town Centre.

Portadown Hotels - Find and Book Yours And Help Support This Website

From Belfast
Exit the M1 at Junction 11 and take the M12 to Portadown. At the Kernan Loop follow the A3 Northway Road towards Portadown and Armagh. Once past the railway station and town centre take a left turn into Brownstown Road,the ground is at the end of the street on the right hand side.

From Dungannon
Take the A4 into Charles Street and Corcain Road. At the A3 Junction turn right into Northway, then a left into Brownstown Road. The ground is at the end of the street on the right hand side.

From Newry
Take the A27 into Portadown, turn right into the A3 Armagh Road, then take the first left at Brownstown Road. The ground entrance is on the left hand side.

From Banbridge
Take the A50 Gilford Road into Portadown. Continue over the river bridge and into the High Street. At the church take a left turn and follow the A3 Armagh Road over the railway bridge. Take a right turn into Brownstown Road, the ground entrance is on the left hand side.

Car Parking
There is no parking available at the ground for spectators, therefore it is a case of finding some street parking.

Portadown benefits from an excellent regular train service from Bangor, Belfast, Dublin and the surrounding area. The railway station is two minutes walk north of the town centre. There are also local bus services from Armagh, Lurgan, Lisburn and Banbridge which stop and pick up on both sides of the High Street.

Directions to the ground from Portadown Railway Station
Come out of the railway station on the ticket office platform, take a left turn at the bottom of the steps, under the A3 Northway Road. Follow the footpath into the town centre, then turn right in the  High Street. At the church road junction take the left fork into Church Street. This leads into Armagh Road and a bridge over the railway line. After a 5 minute walk you will see the ground on your right hand side. Turn right into Brownstown Road, the main entrance is on the left hand side.

Glenavon are the nearest Premier League Club. Annagh United who are also based in Portadown, as well as Loughgall and Armagh City are all local rivals.

Why not write your own review of Shamrock Park Portadown and have it included in the Guide? Find out more about submitting a Fans Football Ground Review.

Map Showing The Location Of Shamrock Park In Portadown

Special thanks to Owen Pavey for providing the photos and stadium layout plan of Shamrock Park Portadown.

Be the first to leave a review of Portadown!