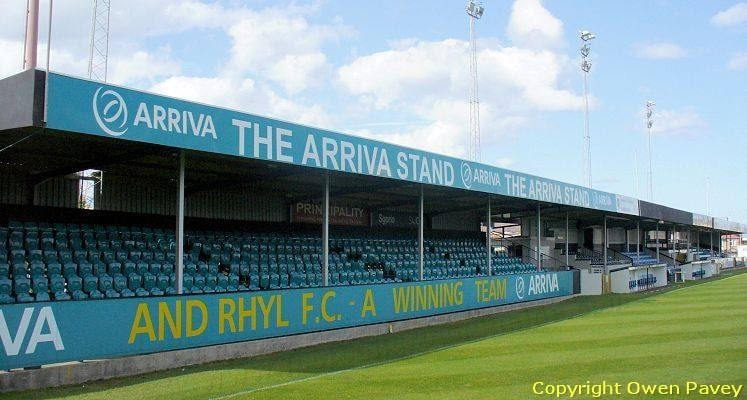 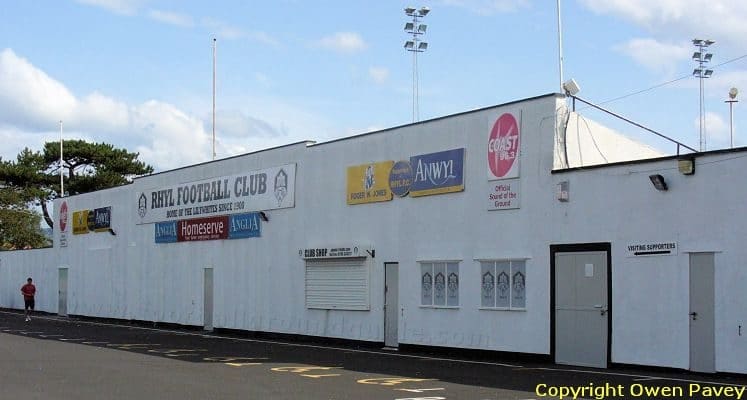 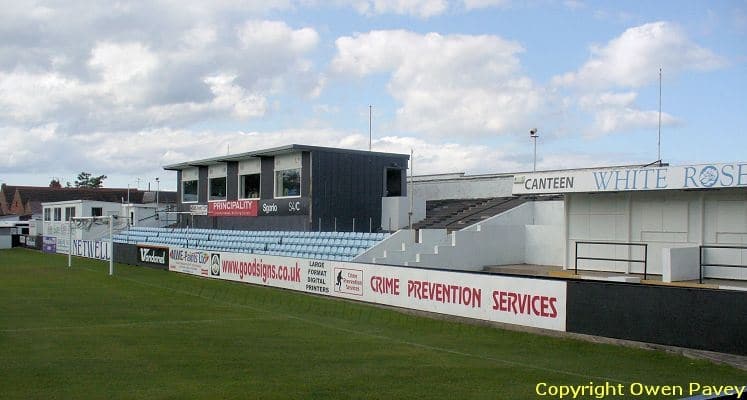 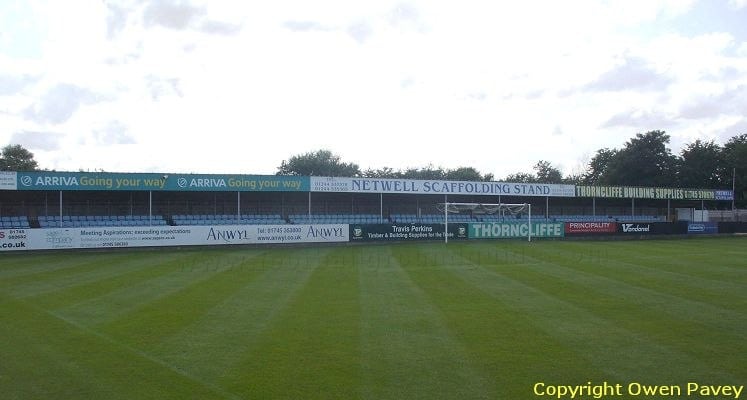 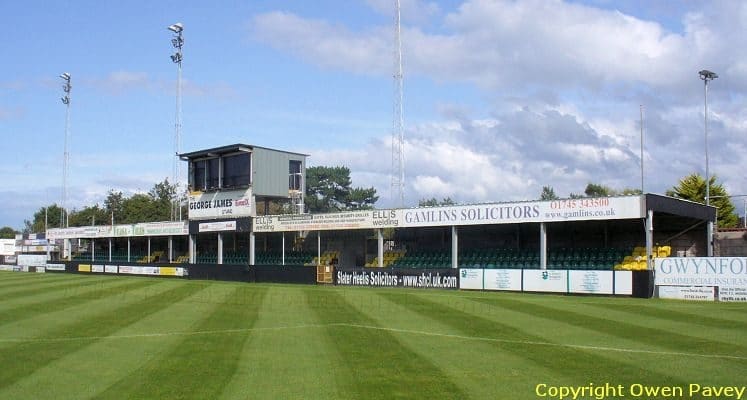 The Belle Vue ground is located in the Southern suburbs of the town, around 10-15 minutes walk from the sea front and town centre. Walking to the ground from the town centre along the B5119 Grange Road the first thing you see on the right hand side is a large white-washed wall in front of a tarmaced car park, which forms the rear of the Grange Road End. This wall bears the football club name in bold black letters, reflecting the club colours. The ground site itself is hemmed in by Industrial buildings on both sides, with the far end backing onto Coronation Gardens. Consequently turnstiles for all parts of the ground are accessed at the Grange Road End.

Heading through the turnstiles next to the club shop we emerge on a bizarre looking former terrace which has an office block perched above 4 rows of sky blue plastic seats taking up the width of the penalty area. The seating is flanked by a wide canteen bar and club shop. This leads into the corner of the George James Stand side which has open terracing either side of the low cover, under which is a tidy 3 rows of green and yellow seats, with a gangway at the rear to stop people's view being obstructed, however the stand roof is supported by a row of columns which may impede your view.

The stand is completed with a television gantry perched above its roof on the pitch centre line. Following the open terrace round to the far side we come to the Coronation Gardens End. The stand has a roof of a similar height to the George James Stand but with slimmer supporting columns. The cover runs the full width of the pitch and has three rows of blue plastic seats. This leads us around the corner post to the main stand side which is in fact comprised of two stands-the Arriva Stand which leads from the corner towards the pitch centre line. This new stand also has a row of slim columns along its front, though it is deeper, with 6 rows of green plastic seats offering the most elevated view of the pitch. The stand nicely joins onto the older Don Spendlove Stand taking us back to the Grange Road End. The stand has a couple of low narrow dug outs jutting out towards the touchline and has four rows of blue plastic seating, again with a line of slim columns along its front edge. The players dressing rooms, toilets and refreshment bars are to the rear of the stand.

Apart from being one of the largest and most developed grounds in the League, it is also the oldest, so an interesting visit awaits. Normally segregation is not in force inside the ground, apart from local derbies. In these cases visiting fans are allocated the George James Stand which is accessible from turnstiles to the far left of the Grange Road end. Normally a relaxed and enjoyable day out.

The Club has its own bar at the ground called the Legends Lounge Bar, which welcomes away fans on matchdays. A few minutes walk along Grange Road (in the direction of the town centre) is the Miillbank Inn, which is a Thwaites pub. In the town centre itself on Sussex Street is a Wetherspoons oulet, whilst near to the Railway Station and High Street is the Cob & Pen. Both these latter pubs are listed in the CAMRA Good Beer Guide. There are plenty of pubs in the centre of Rhyl which is about a ten minute walk away.

From the East
Follow the A55 towards North Wales, then exit at Junction 27 and head towards Rhuddlan on the A525. Continue on the A525 into the South suburbs of Rhyl then just before the Railway line turn right into Prince Edward Avenue. At the B5119 Crossroads turn right into Grange Road, the ground is on the right hand side.

From the South
Follow the A525 North from Ruthin, across the A55 Junction into Rhuddlan. Continue into the South suburbs of Rhyl then just before the Railway line turn right into Prince Edward Avenue. At the B5119 Crossroads turn right onto Grange Road, the ground is on the right hand side.

From the West
Follow the A55 towards Chester then exit at Junction 27 and head towards Rhuddlan on the A525. Continue on the A525 into the South suburbs of Rhyl then just before the Railway line turn right into Prince Edward Avenue. At the B5119 Crossroads turn right into Grange Road, the ground is on the right hand side.

Parking
There is a car park behind the Grange Road End. Otherwise there is plenty of on-street parking in the area.

Rhyl Railway Station is located around a half a mile away from Belle Vue. The station benefits from being on the Arriva Trains Wales Birmingham-Shrewsbury-Chester-Holyhead Service, which links up with the busy ferry services to the Irish Republic. Because of this trains services are frequent between 5am and 10pm. Rhyl can also be reached by Arriva Train Wales South Wales-North Wales Service from Cardiff via Hereford & Shrewsbury. Once you have arrived at Rhyl Railway Station it will take you around 10 minutes to walk to the Belle Vue football ground.

Walking directions from the railway station to the Belle Vue Ground: You need to head away from the town centre and seafront and walk towards the town's Southern  suburbs.To do this walk over the Vale Road Railway bridge which is right next to the Bus and Railway Station, following the A525 into Vale Road. After around five minutes turn left into Prince Edward Avenue.Then after a further 2-3 minutes you will come to the B5119 crossroads, turn right into Grange Road. The ground is on the right hand side, with all parts of the ground accessible from turnstiles at the Grange Road End.

There are a number of local Arriva Wales Bus Services running to Rhyl Bus Station:

Geographically speaking Prestatyn Town are the nearest rivals, just three miles away along the North Wales coast. Colwyn Bay might too be seen as a rival, however they play in the English Leagues (as Rhyl have in the past). However the historic rivalry, and the game which draws the biggest crowds, is with Bangor City despite the two clubs being located 35 miles apart.

Map Showing The Location Of The Belle Vue Stadium In Rhyl

Special thanks to Owen Pavey for providing the information for this page, plus the photos and ground layout plan of Belle View Rhyl FC.