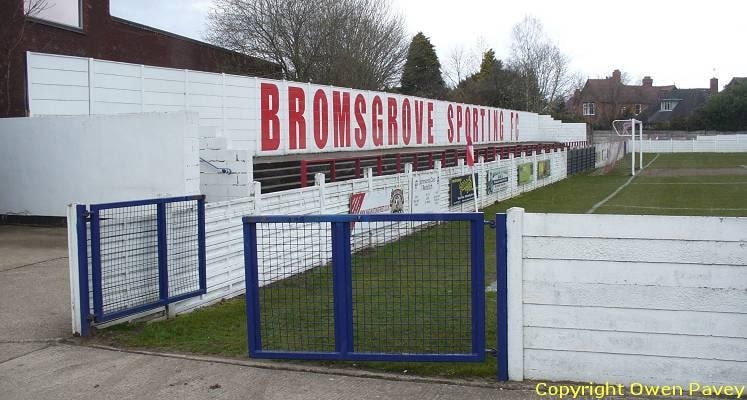 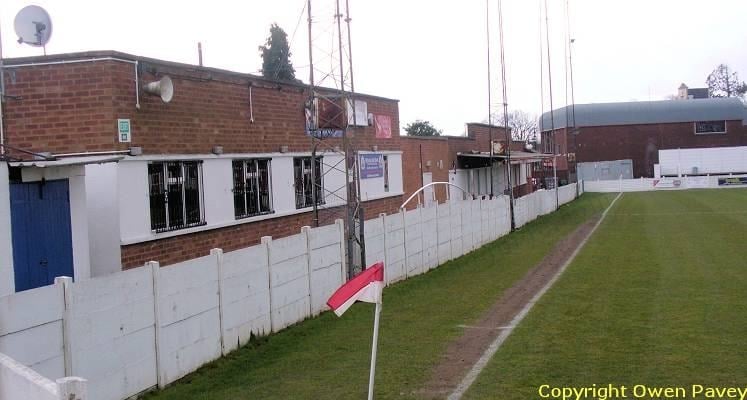 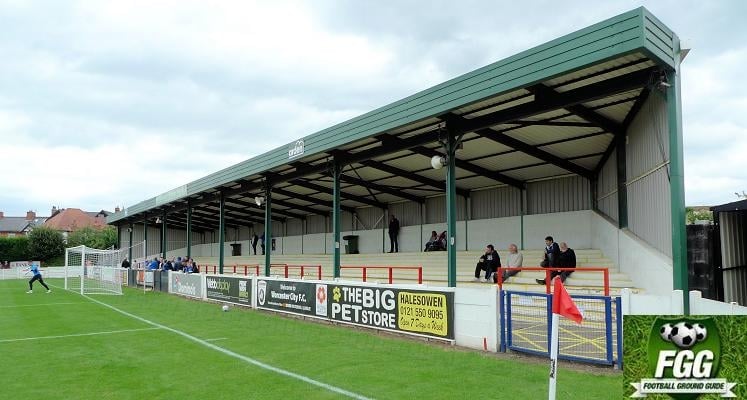 Worcester City left their St George’s Lane ground in 2013 after it was sold to be redeveloped for housing. It was expected that the proceeds from the sale would fund the building of a new stadium in Worcester. However, this has failed to materialise and having ground shared with Kidderminster Harriers for the last few seasons, the Club now shares the Victoria Ground, the home of Bromsgrove Sporting, a 29 mile round trip for Worcester fans.

By National League North standards the ground is of a fair size, having a capacity of just under 5,000. The ground is a traditional older one, with plenty of character. The Main Stand on one side, is a classic looking old stand, the design of which was to be seen in similar guises at many grounds around the country. Alas, many of those have now disappeared as clubs have moved onto new stadiums. The Main Stand runs for around a third of the length of the pitch and sits aside the half way line. The stand is covered and has a raised section of seating, located above a small front terrace. Access to the raised seated area is gained by climbing a small staircase in front, whilst the terraced area is split by the players tunnel, which on either side has some seats fitted, which serve as team dugouts. There are also a number of supporting pillars running across the front of the seated section, although some protection against the wind is given, with windshields on either side. There are areas of flat standing to either side of the stand.

Opposite on the Birmingham Road side of the ground, there is not much in the way of facilities for spectators, just a narrow flat standing walkway, that mostly runs in front of the Social Club building, although there is a small cover above the walkway, by the half way line. The tea bar can be also found on this side of the ground. At the North End of the ground is a sizeable covered terrace, although it does have a fair number of supporting pillars running across the front of it. Whilst at the South End is a smaller open terrace, which has ‘Bromsgrove Sporting FC’ emblazoned across its back white retaining wall in big red letters. The pitch has a fair slope which runs down from the North to the South end. The ground has a set eight tall thin looking floodlights, four of which run down each side of the pitch.

Worcester City currently play in the Midland Football League Premier (this is in the 9th level of the English Football Pyramid System).

For those who like the older traditional stadiums, then the Victoria Road Ground will not disappoint. For games where segregation is put in place then away fans are housed in the covered North Terrace, at one end of the ground, with a small number of seats also being made available in the Main Stand. This covered terrace has quite good acoustics, meaning that relatively few supporters can really make some noise. However it does have a number of supporting pillars that run across the front of it. Please note that this terrace has separate turnstiles to the main ground entrance, which are not readily seen from the main road beside the ground. Look out for a couple of stewards standing alongside the main road, across from the entrance to the small retail park, who do their best to direct away fans. Normally a visit to Victoria Road is a relaxed and enjoyable one.

There is a small supporters club inside the ground, called the Rousier Bar, which normally welcomes visiting fans. However for matches where crowd segregation is in force, then there is no access to the bar for away supporters. The closest pub to the Victoria Road ground is the Hop Pole Inn, a few minutes walk away along Birmingham Road (going in the opposite direction to Bromsgrove Town Centre). Although basic inside (the pub is more of an evening live music venue) it is listed in the CAMRA Good Beer Guide. Otherwise Bromsgrove Town Centre is around a 10-15 minute walk away, where there are plenty of pubs to be found. These include on the High Street the CAMRA Good Beer Guide listed Red Lion, whilst towards the far end of the High Street is a large Wetherspoons pub called the Golden Cross Hotel. Just a little further on from Wetherspoons (on the same side of the road) is a micropub called the Little Ale House, which is worth a visit. If arriving by train at Bromsgrove Railway Station then close by is the Ladybird Inn. Again listed in the CAMRA Good Beer Guide, it also has the advantage of showing on large screens SKY Sports.

From the North M5
Leave the M5 at Junction 4 and take the A38 towards Bromsgrove. After going across the M42 junction continue on the A38 towards Bromsgrove. After half a mile turn right at the first set of traffic lights onto the Birmingham Road (signposted Bromsgrove North & Retail Park). After going straight across a small roundabout and the passing a BP Garage on your left, then you will reach the Bromsgrove Retail Park on your left (which includes a Co-operative Store). Just before the retail car park entrance, then opposite situated in-between some houses is the entrance to the Victoria Road ground.

From The North and East
Take the M42 to Junction 1. Leave the M42 motorway at Junction 1 and take the A38 towards Bromsgrove, then as above From the North M5.

From The South West M5
Leave the M5 at Junction 5 and take the A38 towards Bromsgrove. on reaching Bromsgrove Town Centre, you will reach a roundabout, where you take the second exit towards Redditch. At the next traffic lights, go straight ahead and this leads you into Birmingham Road. The entrance to the ground is a short way down on the left, in-between a row of houses and opposite the entrance to the Retail Park.

Car Parking
There is very limited parking available at the ground itself, although there is some street parking to be found nearby. At the bottom of Birmingham Road there is a small Pay & Display Car park which costs £2.40 for three hours. Otherwise there are a number of other Pay & Display car parks located in the town centre, which is around a 10-15 minute walk away from Victoria Road.

Try to avoid parking in the Retail Park opposite the Victoria Road entrance, as parking is limited to just two hours and you may end up with a parking ticket for your troubles.

Bromsgrove Railway Station is located just under two miles away from the Victoria Road football ground. It is served by trains from Birmingham New Street and Hereford.

On exiting the station by the main entrance, turn right along Garrington Road and follow this road around to the left as it becomes South Road. At the end of South Road, turn right at the T-Junction onto Stoke Road. At the mini-roundabout (with the Ladybird Inn on one side) take the first exit onto New Road. Continue straight along New Road for around one mile until you reach the predestrianised High Street in Bromsgrove Town Centre. Turn right along the High Street. At the end of the High Street turn left onto the road and then take the next right onto the Strand. At the end of the Strand take the pedestrian pathway through onto Birmingham Road. Turn right along Birmingham Road and the entrance to the ground is down on the left (in-between some residential houses) opposite the Co-operative store and Retail Park.

* When accompanied by an adult.

Bromsgrove Hotels - Find and Book Yours And Help Support This Website

If you require hotel accommodation in Bromsgrove or Birmingham then first try a hotel booking service provided by Booking.com. They offer all types of accommodation to suit all tastes and pockets from; Budget Hotels, Traditional Bed & Breakfast establishments to Five Star Hotels and Serviced Apartments. Plus their booking system is straightforward and easy to use. Just input the relevant dates and click on “Search” below or on the hotel of interest on the map to get more information. The map is centered on the football ground. However, you can drag the map around or click on +/- to reveal more hotels in the town centre or further afield.

Map Showing The Location Of The Victoria Road Ground In Bromsgrove

Special thanks to Owen Pavey for providing the photos of the Victoria Road Ground, Bromsgrove Sporting. 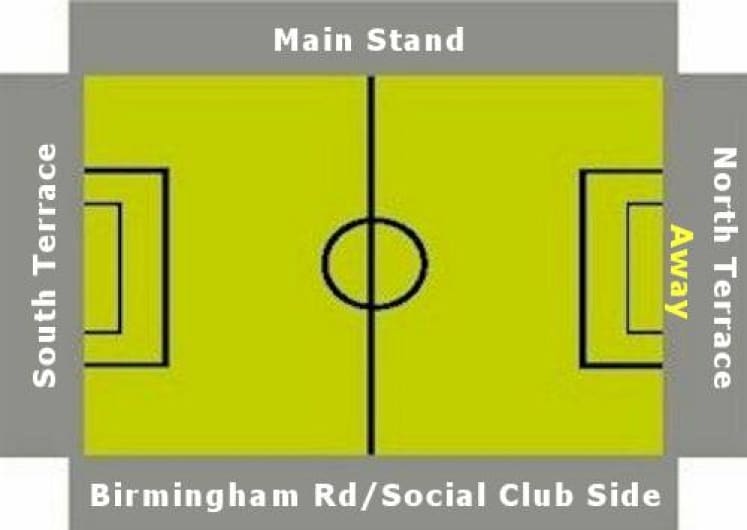