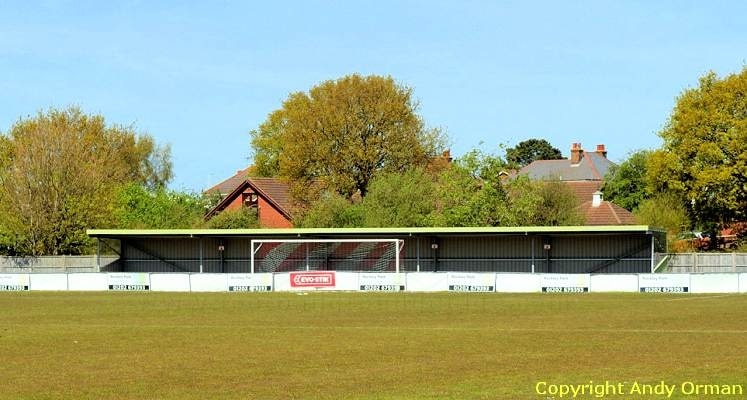 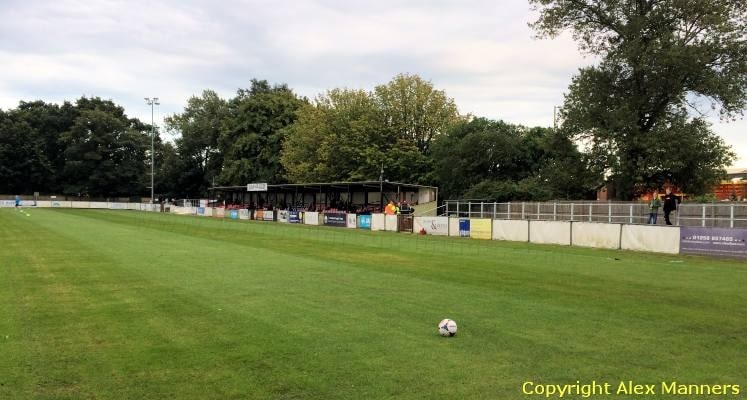 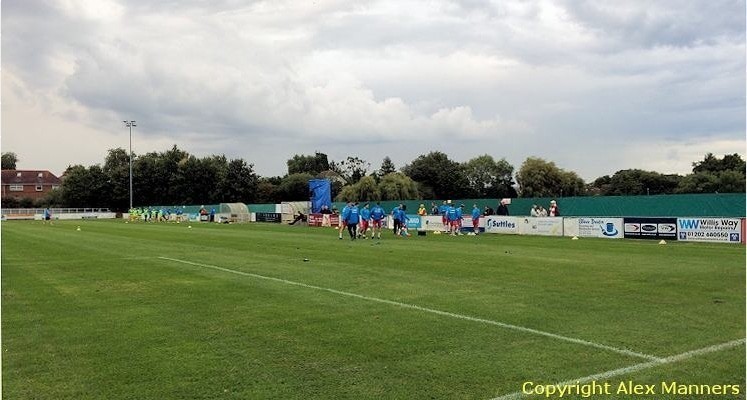 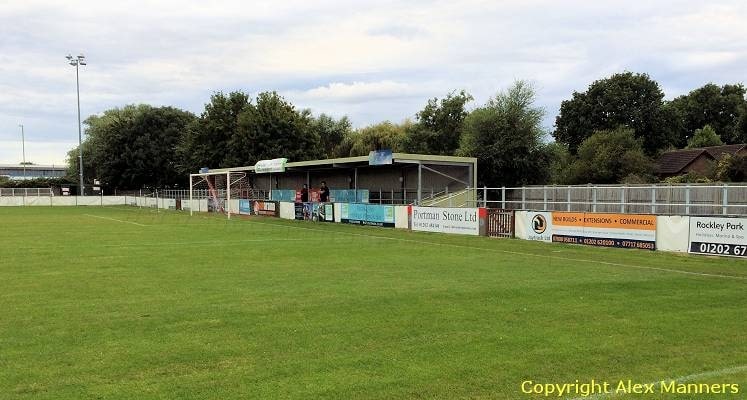 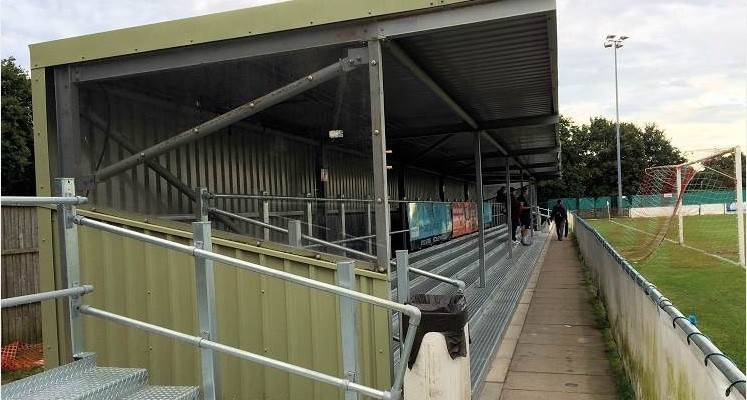 Considering that it wasn’t so long ago that the ground was part of a school playing field, then it is remarkable what the Club have achieved. Considerable work has been done in 2017 to improve spectator facilities, but they still remain quite basic. On the West side, sitting on the halfway line is a simple looking seated stand that has quite a low roof and serves as the Main Stand. This has four rows of seats, with 268 in total, and it has a number of supporting pillars running across the front of it. It runs for about half the length of the pitch. On either side of this are brand new metal terraces, six steps high which go completely down to the corner flags.

The North (School) End of the ground has new metal terracing, once again six steps high. The centre part of this behind the goal has a new metal stand over the terracing complete with windshields at each end. This means that a very good amount of noise can soon be created by only a small group of fans. The rest of the ground is open flat standing areas paved throughout in spring 2017. The team dugouts are located on the opposite side to the Main Stand, with no standing allowed in that area. On this side of the ground, green tarpaulins have been attached to the perimeter fence to try and stop people from watching the game for nothing. Although practical it doesn’t enhance the overall look at the ground. Whilst behind the Clubhouse end are the team dressing rooms and other small buildings. This means that the teams enter the field of play from one corner of the ground. The ground is fairly open and a few houses overlook the ground from both ends. The stadium has a set of four slim floodlights which do a very good job.

Poole Town plays in the BetVictor Southern League Premier Division South. This is at Step 3 below the Football League and one League below the National Leagues North and South.

There is a clubhouse bar at the ground which welcomes visiting supporters. The closest pub is probably the New Inn on Fernside Road, which is around a ten minute walk away. Otherwise around a half a mile away there is a Toby Carvery (further along the main road next to the ground, going in the direction opposite to the Town Centre). Otherwise if you have a bit more time on your hands then there are plenty of pubs to be found in the Town Centre and along the Quayside. However the Quayside is located around one and a half miles away from the Tatnam Ground.

From the North (M3/M27)
From the M3 take the M27 towards Bournemouth. At the end of the M27 continue onto the A31 towards Poole, Bournemouth and Ringwood. After passing the Ringwood exit, continue on the A31 towards Dorchester and Poole (A349). Then at the Bear Cross Roundabout (passing a BP garage on the right), go straight ahead onto the A349 towards Poole. Go straight across the next two roundabouts and at the third take the second exit onto the A3049 towards Poole. At the next roundabout take the second exit towards Poole (A3049) and Channel Ferry. Continue across the next roundabout. Then leave the A3049 by taking the second exit slip road signposted Wimborne (A349) and Poole General Hospital. At the bottom of the slip road take the second exit onto Fleet Lane (signposted Fleet Industrial Estate).After half mile turn left just past Druckfarben on the right and opposite Poole Motorcycles, into Palmer Road. Then take the next right into School Road  This leads down to the school/club car park. To walk through to the Tatnam ground, then at the far end of the car park by the tennis court, look for the pathway through.

The school car park is quite small so fills up quite quickly, however there is plenty of street parking available in the local area, although the Club ask supporters not to park in Well Lane by the ground as access is required by the Club itself.

Poole Railway Station is around one mile away from the Tatnam Ground and is served by trains from London Waterloo (via Southampton) and Weymouth. There is a taxi rank at the station otherwise to walk: Exit the station on the seaward side and turn right. At the first set of traffic lights turn hard right and remain on this road (Sterte Road) crossing over the railway line and you will see the Tatnam ground at the bottom on the right. It’s a comfortable 15 minute walk (3/4 mile). Thanks to Anthony Hanley for providing these directions.

Poole Hotels - Find and Book Yours And Help Support This Website

If you require hotel accommodation in Poole then first try a hotel booking service provided by Booking.com. They offer all types of accommodation to suit all tastes and pockets from; Budget Hotels, Traditional Bed & Breakfast establishments to Five Star Hotels and Serviced Apartments. Plus their booking system is straightforward and easy to use. Just input the relevant dates and click on “Search” below or on the hotel of interest on the map to get more information. The map is centered on the football ground. However, you can drag the map around or click on +/- to reveal more hotels in the town centre or further afield.

Map Showing The Location Of The Tatnam Ground In Poole

Special thanks to Alex Manners for providing the photos of the Tatnam Ground Poole Town.