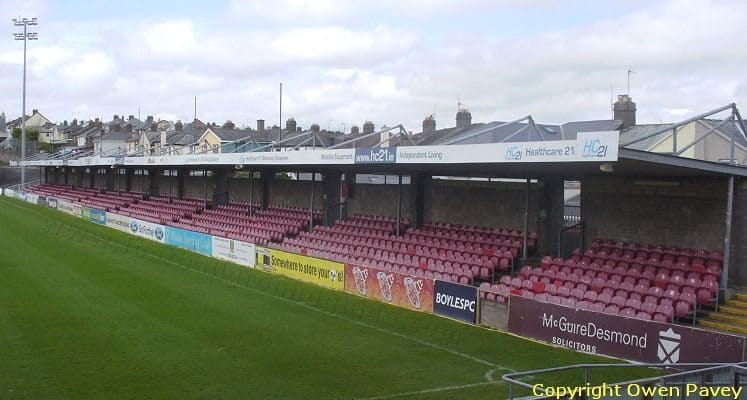 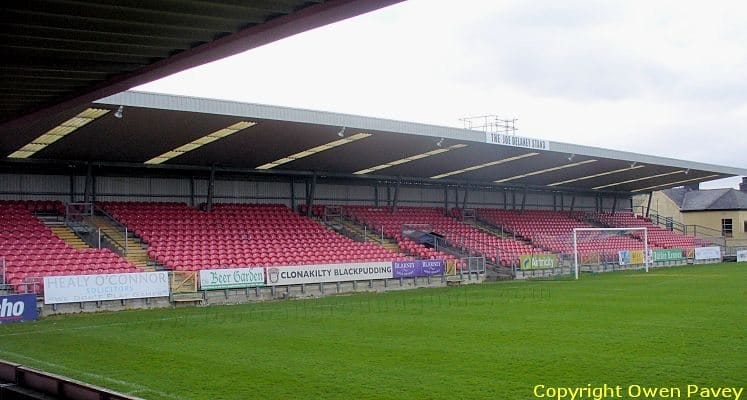 Turners Cross Stadium is located in the suburban Turners Cross district of Cork, around 1.5 miles due south of Cork City Centre. 'The Cross' has seen enormous redevelopment in the last 15 years, and the football club can take some pride in having the only fully all-seated Irish League stadium with stands on all four sides. At one end is the Joe Delaney Stand, which has the club offices to its rear. The stand itself replaced a narrow yet deep covered terrace known as 'The Shed' and has 1,600 red plastic seats beneath a low cantilever roof. There is a line of supporting columns in front of the rear two rows though they are unlikely to obstruct the view of the pitch. Opposite is the St Anne's Park End, which although appearing identical to the Joe Delaney Stand is in fact slightly deeper, having 20 rows of 2,800 red plastic seats. The seats were fitted without a roof initially, with the back wall and cantilever roof installed at a later date.

On one side is the Donie Forde Main Stand which sits on the pitch centre line and holds 1,900 seats in total, the lower seating deck has eight rows of seating, though sadly does not benefit from being covered by the roof. The upper deck also has 8 decks of seating covered by a cantilever roof, once again the rear 2 rows of seating have supporting columns. The stand is complimented by executive facilities from the top of the seating deck, with the most distinguishing feature being a fully enclosed media suite and police control box on its roof. This stand is also accessed from a walkway leading around the far left side of the Joe Delaney Stand. Opposite is the Derryanne Road Stand, this low full pitch length stand has a cantilever roof over its six rows of 1,185 red plastic seats, and though the rear two rows of seating also have supporting columns they are too slim to be considered obstructive. Since there is no access to this side of the ground from the residential streets the stand is accessed by a narrow walkway at the rear leading from the far right of the Joe Delaney Stand. Next to this stand in one corner the enclosed beer garden of the Horseshoe Inn Public House looks out onto this area of the ground, its cream coloured paint scheme contrasting with the red seats and grey steelwork of the stadium.

Visiting supporters are allocated a section of the St Annes Park Stand, an excellent behind the goal all seater stand. There is no concourse as such, you enter the stand at the top of the seating deck. Leg room is pretty good and the low cantilever roof not only offer an unobstructed view of the pitch but also adds to the acoustics. There is normally a good atmosphere generated.

Unusually both home and away fans share the same entrance turnstiles behind the Joe Delaney Stand and away fans are then asked to what down behind the Derryanne Road Stand to reach the away stand.

The Horseshoe Inn outside the stadium on Curragh Road is as you would expect is popular on matchdays. About a five minute walk away is the Turner's Cross Tavern (with the stadium entrance behind you turn left and the pub is at the end of this road on the left hand corner). Also around the corner from the Tavern (turning left at the traffic lights) and about another five minute walk are the Mountain and Evergreen pubs, the latter on my last visit was particularly popular with away fans.

From The North
Follow the N20 South of Mallow into the Northern suburbs of Cork. On the approach to the City Centre pass over the Carroll's Quay river bridge and turn left onto Lavitts Quay, following the South Bank of the river. At the second crossroads turn right into the R610, follow the road as it bends to the left and crosses the river again. Stay on this road as it links with the dual carriageway N27 South Link Road. Exit the carriageway to link up with the R851,turning left into Evergreen Road to take you back over the N27. Take the second left turn into Curragh Road, you will then see the main entrance and turnstiles to Turners Cross Stadium on the right  hand side. The ground does not have car parking so you will have to park in the surrounding residential streets.

From the South East or West
Follow the N40 South Ring Road into the South suburbs of Cork, exit at the N27 Junction, taking the 3rd exit on the roundabout to lead you into Kinsale Road. You will then see the tall floodlights of Musgrave Park Rugby Ground on the left hand side. Keep on the road as it merges with Curragh Road. You will then see the floodlights of Turners Cross Stadium direct ahead of you, with the entrance and turnstiles on the left hand side.

There is no parking for supporters available at the ground. However there is plenty of street parking available in the surrounding streets.

The nearest railway station is Cork (Kent) station, which is served by trains from Dublin Heuston and Limerick. Cork (Kent) station is around two miles away in the centre of Cork and is really too far to walk, especially as most of the walk is uphill. Either take a taxi, or get a bus from the nearby Parnell Place Bus Station up to Turners Cross (the 226 Airport Service stops in Turners Cross, ask the driver to stop there).

Walking directions to Turners Cross
If you have time on your hands and you are feeling fit then you can embark on the 30-35 minute walk: Come out of the Railway Station concourse and turn left following the signs for the City Centre. After two minutes take the second road to the left, which is Clontarf Street. This is a one way street so the traffic should be coming from behind you into the City Centre. This road will take you over a river bridge where you will then turn right and follow the south river bank. At the next left turn into the R610 Parnell Place. The road passes over another river bridge and becomes Anglesea Street which then kinks slightly to the right to become Infirmary Road. You will then see St Johns Central College and Langford Place on the right hand side. At the next crossroads,turn right and walk towards Langford Mill.Continue over the next two crossroads, where the road becomes Summerhill South. As the next crossroads leads into St Patricks Road turn left into R851 Evergreen Road, then after one minute turn right into O Connell Avenue, you will see the floodlights after a couple of minutes as the road curves round to the left. For the away turnstiles take the next right into Deryanne Road, then left into St Anne's Park. The entrance to the ground is on the left. For home fans continue along O Connell Avenue, then at the end of the junction turn right into Curragh Road. The main entrance gate, turnstiles and club offices are on the right hand side.

* Limited number available and only when purchased in advance of the match.

Cobh Ramblers are the nearest rivals, with Limerick being the nearest Premier Division rivals.

Special thanks to Owen Pavey for the information and photos of Turners Cross Cork City. 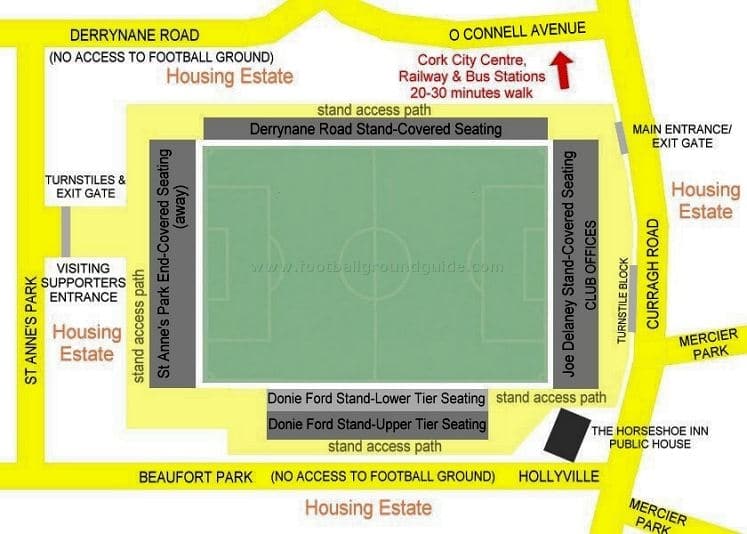