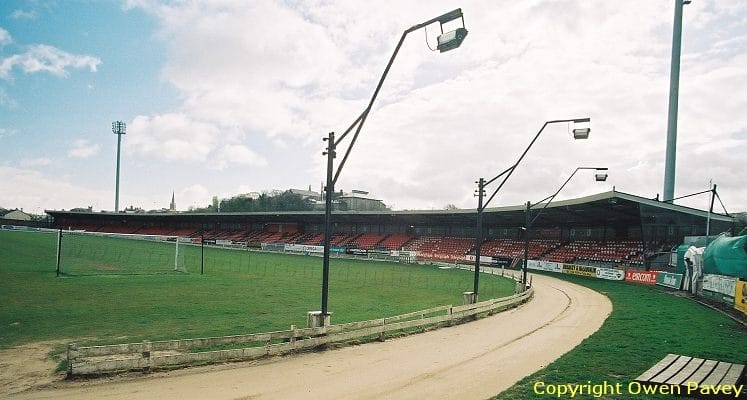 After spending most of the 2017 season playing their home games some 15 miles away at Maginn Park in Buncrana, the Club have returned in 2018 to their Brandywell home. During their playing absence Brandywell has been transformed with a new Main Stand being constructed on the West side of the stadium and the existing East Stand opposite being refurbished complete with new seating. A new artificial 3G pitch has also been installed.

Brandywell is located close to the Bogside area, to the South-West of Derry/Londonderry City Centre. The ground shares its surroundings with County Derry’s Celtic Park Stadium, and for those who are sightseeing both stadiums are visible from the Grand Parade side of the City’s ancient walls. The vast hillside City Cemetery looms over both grounds and dwarfing the surrounding housing estates. Derry City themselves are a Northern Ireland club who were accepted into the League of Ireland in 1985. Brandywell itself, which is owned by the local council, is a distinctive stadium, its shape being formed by a history of hosting greyhound races.

The new Main Stand has a capacity of 955 seats. Running for around half the length of the pitch it sits astride the halfway line. It has a tall cantilevered roof, meaning that there are no roof supports to hinder your view of the playing action. The East Stand opposite was opened in 1991 it contains around 2,700 mainly red plastic seats over eight rows with BRANDYWELL spelt out in black. Despite being set back from the pitch the stand still feels well connected to the action.. Interesting both sides of this covered seated stand extend around both corners of the ground, which makes you think that at one time it was intended to redevelop the whole ground in this way. The low cantilever roof offers an unobstructed view of the pitch and the fact that both home and away supporters are accommodated in this stand can make for a great atmosphere on a matchday. Both ends are currently unused for spectators. The stadium is completed with a set of four tall floodlights.

In 2018 Brandywell Stadium was renamed the Ryan McBride after a former player and Captain of the team.

If anyone can provide me with photos of the new Brandywell Stadium for use on this website then please email me at contact@footballgroundguide.com. Please note that I can only accept photos that have been taken by yourself or where you have the permission of the photographer for them to appear in this Guide.

The Club have secured funding to improve the facilities at Brandywell Park.Works have commenced with the demolition and clearance of the Lone Moor (West) side of the stadium in preparation for a new stand to be built. The new stand will run for just under half the length of the pitch and sit astride the half way line. It will have a covered seated capacity of 955. It will also include new changing rooms and media facilities. Surprisingly this redevelopment meana that the Club will groundshare away from Brandywell Park for most if not all of the 2017 season, whilst the building takes place.

An Artists’ drawing Of The New Proposed Stand Image courtesy of the official Derry City FC website where you can keep up to date with the development and see photos of the progress works.

Visiting supporters are allocated a seating block in the East Stand towards the North End of the stadium. The facilities within this stand are okay and the view of the playing action good. This stand is shared with home fans and the low roof means that even a relatively small number of fans can really make some noise. The Club and supporters are normally most welcoming to visiting sides.

There is a social club at the ground but this is for members only. It is best therefore to drink in the vibrant city centre or enroute to the stadium.

From the South
Follow the A5 from Strabane alongside the River Foyle, turn left and cross the River Foyle on the A2   Craigavon Bridge. You will then come to a roundabout with the “hands across the divide” statue. Turn the left turn into Abercorn Road and follow the road as it kinks to the right and becomes Barrack Street. You will then see the floodlights of Celtic Park GAA Stadium direct ahead of you with the floodlights of Brandywell just visible to the left. As the road starts to slope down turn left into Windmill Terrace and follow the road as it snakes downhill and joins Lecky Road. Take the second right turn into Brandywell Road.

From the East
Follow the A6 from Dungiven into the outskirts of Derry,passing Institute fc, Altnagelvin Hospital then Londonderry Railway Station. Following the city centre signs, turn right and cross the River Foyle on the A2 Craigavon Bridge. Then as ‘From the South’ above.

From the West
Follow the R236 from Ballybofey / R265 from Lifford merging into the A40 on the south suburbs of Derry. On the approach to the City Centre turn left into Lone Moor Road. The main entrance gate leading to the stadium, Sports Centre, training ground and football club car park is on the right.

Car Parking
There is a car park at the stadium which is accessed from Lone Moor Road, using the main entrance gate to the Sports Centre and training ground. The club car park is on the left hand side beyond the rear of the old Main Stand. Otherwise it is case of street parking in the local area.

Londonderry Railway Station is located just over a mile away from the stadium. Londonderry is linked to the whole of Northern Ireland by the Translink and Northern Ireland Railways Network. The quickest route from Belfast would be to take the Londonderry Railway Line service from Great Victoria Street via Antrim, Ballymena and Coleraine. Journey time is around 2 hours 15 minutes with 8 services throughout the day. The trains terminate at Londonderry. There are no direct services that operate from Dublin, passengers would need to first travel to Belfast Central.

The stadium is around a 15 minute walk away; When you come out of the railway station booking office, turn right and walk along the riverside. Cross the River Foyle on the nearby Craigavon Bridge. You will then come to a roundabout with the “hands across the divide” statue. Turn left into Abercorn Road and follow the road as it kinks to the right and becomes Barrack Street. You will then see the floodlights of Celtic Park GAA Stadium direct ahead of you with the floodlights of Brandywell just visible to the left. As the road starts to slope down turn left into Windmill Terrace and follow the road as it snakes downhill and joins Lecky Road. Take the second right turn into Brandywell Road. Turnstiles for the New Stand on the East side of the stadium are on the left with turnstiles to the old West side terracing, with the open seating and Glentoran Stand further up the hill.

For those travelling from the Mid-West of the Irish Republic Bus Eireann Expressway Service 064 links Galway with Donegal, travelling via Knock Ireland West Airport, Sligo and Ballyshannon. The service then continues through to Donegal, Ballybofey and Letterkenny, terminating at Derry Foyle Street.

With all bus services arriving into Derry/Londonderry Foyle Street in the City Centre it will then take a 10 minute walk to locate Brandywell, which is located in Bogside, outside of the city walls.

When you come out of the bus station walk through the narrow exit next to the enquiries offices and turn right onto Foyle Street. You will then see the clock tower of the Guildhall direct ahead of you. Turn left and walk under the Shipquay Gate arch in the City wall, then walk up the hill into the City Centre. At The Diamond War Memorial turn right into Butcher Street and exit the City Centre through the Butchers Gate. You will then see the floodlights of Celtic Park GAA Stadium direct ahead of you with the floodlights of Brandywell just visible beyond. At the junction turn left and follow Fahan Street downhill alongside the grass banking outside the city wall. At the crossroads turn left and follow Lecky Road past the Bogside Artists Studio. Continue for 3 minutes then turn right into Brandywell Road. Turnstiles for the New Stand on the East side of the stadium are on the left hand, with turnstiles to the  old West side terracing, open seating and Glentoran Stand further up the hill.

* Not available to purchase online.

There are wheelchairs spaces in the disabled enclosure next to Glentoran Stand on the old. West Side of the stadium plus an enclosed wing section in the East Stand.

Finn Harps. Although geographically speaking Institute are the nearest rivals, however they play in the Northern Ireland League structure.

If you require hotel accommodation in the area then first try a hotel booking service provided by Booking.com. They offer all types of accommodation to suit all tastes and pockets from; Budget Hotels, Traditional Bed & Breakfast establishments to Five Star Hotels and Serviced Apartments. Plus their booking system is straightforward and easy to use. Yes this site will earn a small commission if you book through them, but it will help towards the running costs of keeping this Guide going. .

Map Showing The Location Of The Ryan McBride Stadium

Why not write your own review of Brandywell Stadium Derry City and have it included in the Guide? Find out more about submitting a Fans Football Ground Review.

Special thanks to Thomas McMillan for providing the photos of the Brandywell Stadium.

The ‘Back To Brandy’ video was produced by >Derry City FC Online and made publicly available via YouTube.

Be the first to leave a review of Derry City! 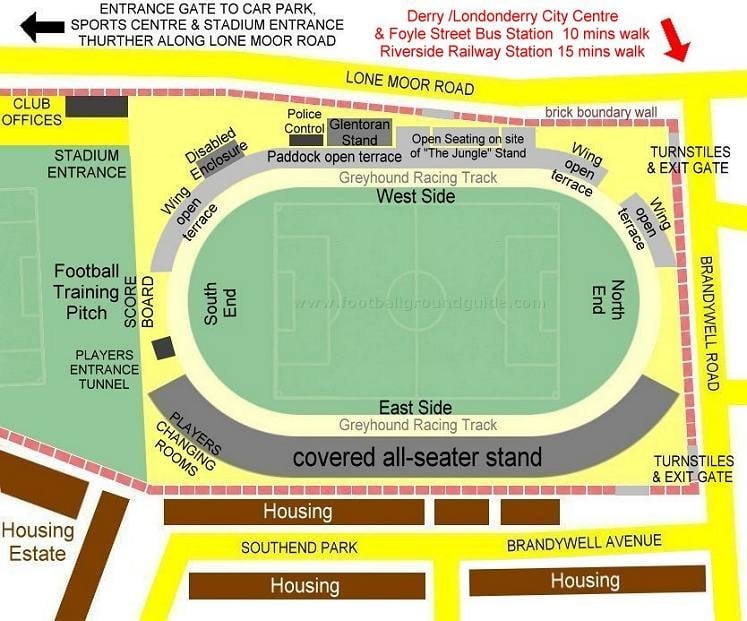