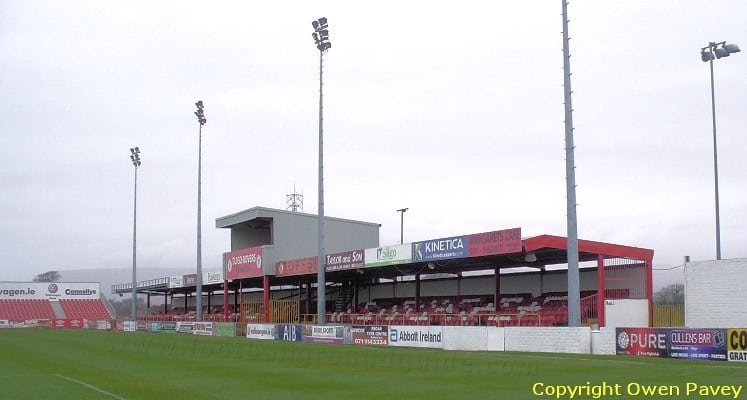 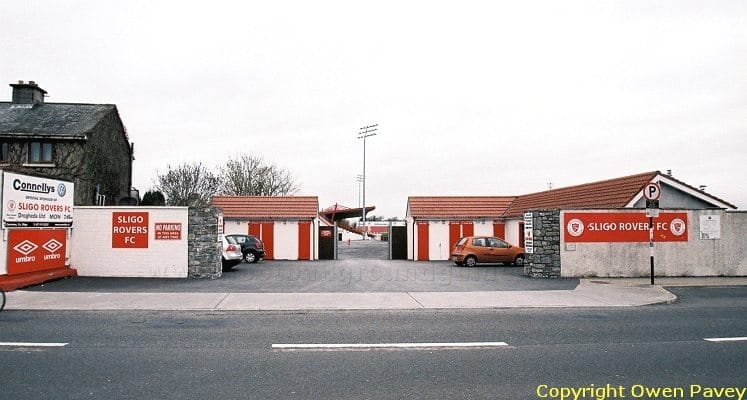 There is always a sense of anticipation when you arrive in a town centre and you can see the floodlights of a football ground not too far away. Both Dundalk's Oriel Park and Sligo Rovers Showgrounds fall into this category. The football club lies at the heart of the community, with the ground surrounded by a residential area, just a couple of minutes walk South of Sligo's riverside Town Centre. The main entrance and Church Hill End of the ground received a face-lift recently, with new club offices, two new turnstiles blocks and an exit gate being constructed,a ll of which were given matching white paint schemes with low red tiled roofs, neatly mirroring the club colours. Walking through the home turnstiles and looking to the right and the large grey gravelled area behind the goal you can’t help but feel there should be a stand in place here, and indeed up to 2006 there was. This was known as 'The Shed' which comprised a low terrace cover between the corner post and penalty area, with a flanking shallow open terrace leading to the far corner post. All traces of the stand and terrace have now gone, with the former rough grassed area behind The Shed now levelled out and tarmaced with a car park and portakabin toilets and refreshment facilities for visiting supporters.

Just outside the turnstile entrance, looking to the near left hand Tracey Road housing boundary wall there is an assortment of facilities for home supporters, a new club shop, toilet block and refreshment bar and a stadium control box, all leading the eye towards the impressive Main Stand. The former stand on this side of the ground was a far smaller structure, with a low barrel roof, four  pitch side floodlight pylons, with a television gantry perched on its roof over the halfway line. It was demolished in 2001 to make way for the new structure. The new stand has around 1,853 red seats on its concrete deck, with the traditional enclosed radio booth at the rear, above the players tunnel and dug outs. Space for wheelchair users is also provided pitch side at the Church Hill End. To ensure supporters in the new stand had the best possible view of the pitch the club took the unusual (but very thoughtful) decision to relocate all four floodlight pylons to around the corner posts. Again, there is now no trace of these pylons as they were recently replaced by a set of two much taller floodlights at either end of the stand which not only give the ground better lighting for evening games but also are visible for miles around, a rather helpful feature if you didn’t know where the ground was located!  One small drawback to the stand is to gain as much width for the access walkway backing onto the Tracey Road housing boundary wall the vertical supporting steelwork for the roof intrudes one metre into the rear of the seating deck, in some cases obstructing the view of the pitch from the top row of seating. The seating deck is accessed from the rear walkway and also continues round to the Railway End-yet another area which has seen recent changes.

The former flat tarmaced standing area and rear grass banking of the Railway End were replaced in 2012 by a concrete open seating deck of 1,300 red seats. As some fans are no doubt aware open seating left to the elements will, over a number of years, fade  in colour and become brittle and cracked, with the metal frame rusting to become either dangerous to sit on or just completely unusable. To counter this it would appear the club have thought ahead once again, the new one piece molded seats bare a remarkable resemblance to the L shaped seats from lego kits! The seats are placed on raised strips of concrete so, unusually, when you walk up the entrance steps you actually end up stepping down to reach your seat. Turning finally to the Jinks Avenue Stand, now the oldest part of the Showgrounds, which backs onto the floodlit training ground. The low roofed stand sits slightly off the centre of the pitch, as shown by the position of its four pitch side floodlight pylons. The stand has seen two major changes, the addition of a television gantry to replace the structure which previously stood on top of the old main stand, and the installation of six rows of around 847 seats. The stand is has a number of supporting columns which may impede your view of the pitch from the rear three rows, the tv gantry stairwell provides a natural divide between the home and away areas, with the split being roughly 60% home and 40% away supporters, making it a cramped yet atmospheric place to be on matchdays. This conversion to seating was completed in 2009 to allow the club to meet the minimum 2,700 seating requirement for UEFA Europa League fixtures. It is of considerable credit to this well organised, forward thinking football club that the seating capacity now stands at around 4,000 with the potential to make further changes when finances allow.

There is the possibility of further work to be carried out on three sides of the ground at some point in the future, with the Jinks Avenue Stand and its four pitch side floodlights to be replaced by a new 2,000 seater stand and corner floodlights to match the Main Stand side pair already in position. The Railway End is also likely to receive a roof whilst there is the additional possibility of a stand-either permanent or temporary-on the former site of The Shed. If this happens the final all seater capacity could be raised to over 6,000.

Visiting fans are allocated part of the Jinks Avenue Stand leading up to the television gantry. As far as we are aware the stand is accessed by turnstiles to the right of the main entrance and then walking to the right of the flat gravelled area behind the goal. The pitch side seated stand has a low roof with an away seated capacity of around 400 seats over six rows, with a number of columns which may impede your view from the rear three rows.

Gareth Brennan informs me; 'The closest pub is Mooneys which is located almost directly opposite the turnstiles. Inside its walls are covered in Rovers pictures and memorabilia. If you're walking from the train station, then there is O'Neills pub (nothing like the English chain of the same name) which is on the corner of Wolfe Tone Street and Church Hill.' Otherwise there are plenty of pubs to be found in the nearby town centre which is only a ten minute walk away from the 'Showgies' as the ground is called by the locals.

From the North
Follow the N15 South from Ballyshannon into the Northern suburbs of Sligo. The road merges with the N16 over the bay and then becomes the N4.Once over the river and into the Town Centre continue over the next three crossroads then on exiting the Town centre turn right into Church Hill.The ground is on the right hand side.

From the East
Follow the N16 from Enniskillen into the North suburbs of Sligo. At the junction with the N15 turn left and follow the N4.Once over the river and into the Town Centre continue over the next three crossroads then on exiting the Town centre turn right into Church Hill. The ground is on the right hand side.

From Dublin
Follow the N4 from Carrick-on-Shannon into the South suburbs of Sligo. Just before reaching the Town Centre turn left into Church Hill. The ground is on the right hand side.

From the South West
Follow the N17 from Charlestown. Then turn left onto the N4 on the approach to Collooney. Follow the N4 into the South suburbs of Sligo. Just before reaching the Town Centre turn left into Church Hill. The ground is on the right hand side.

Car Parking
Parking is available along Church Hill, and the training ground complex beside the Stadium.

Sligo Railway Station is located only a five minute walk away from the Showgrounds. There is a regular service from Dublin Connolly to Sligo, with the journey time being around 2 hours 10 minutes with 7 complete services throughout the day. On the approach to Sligo you will see the floodlights of The Showground (or two of them anyway) on the right hand side. When you come out of Sligo MacDiarmada Railway Station the town centre is to your left with the football ground a simple five minute walk.

Walk down the steps outside the railway station and walk directly across the road into Wolfe Tone shopping street. At the end of the road turn right into Church Hill. The entrance to the stadium is on the right hand side with home and way turnstiles either side of the main entrance gate.

Bus Eireann Expressway Service 023 From Dublin Busaras and Dublin Airport follows a similar route as the Irish Rail train service with 6 services throughout the day. The journey, however, at nearly 4 hours is far longer than travelling on the train.

For those travelling from the mid-west of Ireland, the far north counties and Northern Ireland,Bus Eireann Expressway Service 064 links Galway to Sligo via Knock Ireland West Airport. The service then continues north to Donegal, Letterkenny and terminates at Derry/Londonderry.Bus Eireann Expressway Service 066 also links Westport and Ballina to Sligo before travelling to the Northern Ireland town of Enniskillen where Translink Ulsterbus Goldline Service 261 travels onto Belfast Europa Bus Station.

With all bus services arriving at Sligo Bus Station, you will see two of the floodlights of The Showgrounds as the Bus pulls into the Bus Station and Railway Station entrance. It will take a straightforward 5 minute walk to get to the Showgrounds, see directions 'By Train' above.

Spaces for wheelchair users is provided pitch side at the Church Hill entrance end of the Main Stand.

Sligo Rovers have a historic rivalry with Galway United in what is known as the Connacht Derby. Other nearby clubs include; Longford, Finn Harps and Derry City.

Map Showing The Location Of The Showgrounds in Sligo

Special thanks to Owen Pavey for supplying the information and photos of the Showgrounds Sligo Rovers.

Be the first to leave a review of Sligo Rovers! 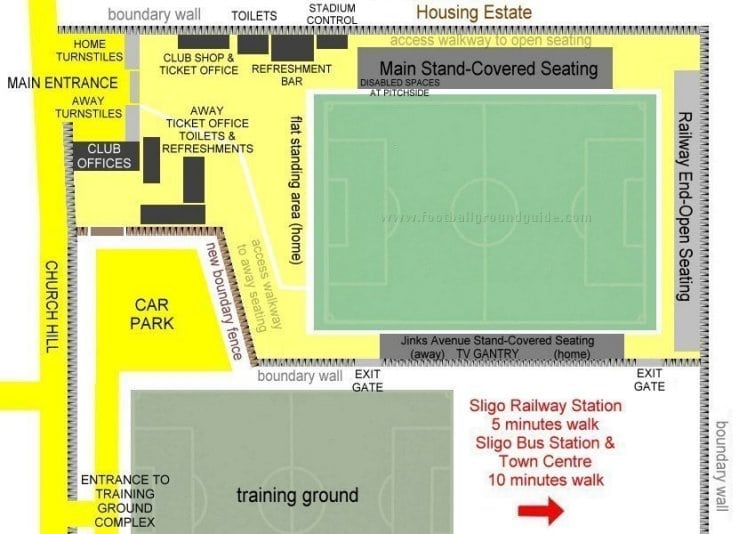