Station Park is predominantly terracing, with terraces behind each goal and along one side of the pitch. The terraces at each end of the ground are not covered and are open to the elements. At one end is the small East Terrace, which is unusual in that it is slightly curved which means that spectators at the ends have a better view of the goal. There are 7 steps and various standing safety barriers. Opposite is the larger West Terrace, which has 20 steps and lots of standing safety barriers. The latter is unusual in being taller on one side than the other.

On the North side of the ground is the Main Stand, which is a traditional-looking covered, seated stand. The seating is raised above pitch level and there are a number of supporting pillars at its front. The seats are long wooden benches with backs. This stand only runs for around half the length of the pitch. The team dugouts are located in front of this stand. On the front wall of the stand is the Forfar Wall of Fame. There are flat bricks attached to the wall with peoples names on the bricks. On the other side, is a small covered terrace that runs the full length of the pitch. It arrived at Station Park in 1958 after previously being at the Ingliston Showground in Edinburgh. It has a number of small floodlights protruding from its roof. There is a quite a slope to the pitch that runs down across the ground from the West Terrace down to the East Terrace. In 2012 the Club installed a 3G artificial playing surface at Station Park.

Normally segregation of supporters is not in force, so most away fans tend to head for the covered South Terrace. If segregation takes place, then the open West Terrace is allocated to away supporters plus part of the Main Stand. The facilities are fairly basic around the ground, but as you would expect the bridies, for which the town of Forfar is famous, are pretty good!

Dave Mair informs me; ‘The nearest pub to Station Park is the Plough Inn, on Market Street. This pub which has been previously listed in the CAMRA Good Beer Guide. It is only a five minute walk away from Station Park.’

The ground is located right on the outskirts of town. In fact the Main Stand, backs onto fields. From the A90 take the A926 towards Forfar. At the T Junction turn right into Brechin Road, then turn left into Market Street and then 2nd left into Carseview Road for the ground. There is only limited parking available at the ground, otherwise there is the nearby Muir Street car park or street parking.

Even though the ground is called Station Park, there is in fact no railway station in Forfar itself. The nearest stations are in Dundee or Arbroath, that are both around 14 miles away!

John Aitken from the Wanderers Way Annual adds; ‘From Dundee Seagate Bus Station (which is 10-15 minutes walk away from Dundee Train Station) get the Number 20 bus to Forfar (the Royal Bank of Scotland stop on East High Street). From there walk up the hill till you get to crossroad at the end of East High Street take a left down North Street. Continue straight along this road (passing the North Street Fish & Chip shop on the right), which leads into Carseview Road and the ground is further up on the left’.

Forfar Hotels - Find and Book Yours And Help Support This Website

If you require hotel accommodation in Forfar then first try a hotel booking service provided by Booking.com. They offer all types of accommodation to suit all tastes and pockets from; Budget Hotels, Traditional Bed & Breakfast establishments to Five Star Hotels and Serviced Apartments. Plus their booking system is straightforward and easy to use. Yes this site will earn a small commission if you book through them, but it will help towards the running costs of keeping this Guide going.

Map Showing The Location Of Station Park In Forfar

Special thanks to Geoff Jackson the ‘Cumbrian Groundhopper ‘ for providing the photo of the East Terrace at Station Park Forfar Athletic. 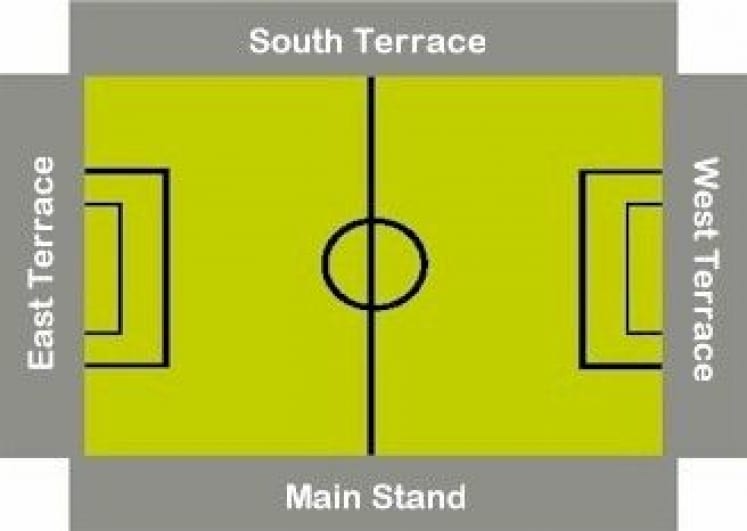