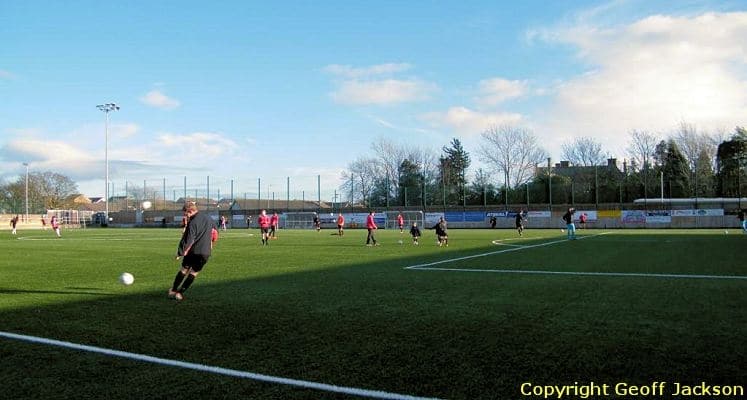 On one side is the smart looking Main Stand. This small covered stand is all seated and is five rows high and is fairly new looking. It straddles the halfway line on the West side of the ground. The rest of the stadium is mostly comprised of uncovered hard standing areas, apart from the East side which is unused for spectators. This side though does have the team dugouts situated in front which leads to a procession of players and staff at half and full time as the dressing rooms are located on the opposite side. Beyond this side of the stadium there is some high netting to try and prevent balls being kicked out of the ground. The North End of the ground which has been dubbed the Astro End, after the Astroturf training pitch behind, has been designated for away supporters, if segregation is required. The pitch slopes down from this area towards the South (Club house) end of the ground.

During 2013 the ground saw some improvements being made with a new covered terrace being constructed at the club house end of the stadium, whilst the North terrace was also extended. An artificial 3G pitch was also installed for the start of the 2012/13 season.

Special thanks to Alan Price for providing most of the information for this page. Dominic Jack a visiting Clyde fan informs me; 'I was very impressed with how welcoming the club was to visiting fans. The social club was very good and the pies were superb, one of the best that I have had for a long time. Overall it was very worth the trip down, despite the scoreline!' Derek Hall a visiting Hartlepool United fan adds; 'The pies were delicious and fantastic value; The Scotch Pie (minced savoury mutton) was only £1.70 whilst the Steak Pie (served in the same pastry as the Scotch Pie) was £2'. Although you have to sign in, as a visitor, at the excellent social club on the ground, there is no charge and the atmosphere is very welcoming. There is a club house at the ground itself which welcomes away supporters. Although you have to sign in as a visitor, there is no charge for this. Otherwise there are also plenty of bars half a mile down the hill, on Annan’s High Street. One of these is the Blue Bell Inn, an old 18th Century Coaching Inn, which is situated by the River Annan and is listed in the CAMRA Good Beer Guide.

Also just off the High Street in Lady Street, located in the Corner House Hotel, is 'The Shed' bar which is popular with football fans and has SKY Sports. If you’re looking for something to eat, then the Café Royal is recommended either for eat-in or as a takeaway chippy.

From the North Leave the A74(M) at Junction 20 and follow the signs for the B722 Annan. After about five miles, Galabank is on your right as you enter Annan.

From the South and East
Leave the A74(M) at Junction 22 and take the the A75, towards Dumfries. After about eight miles turn left onto the B6357, signposted Annan. After 3/4's of a mile turn right at the roundabout into Scotts Street and follow this until it becomes High Street. At the traffic lights in the town centre turn right onto the B722 (Lady Street, signposted Eaglesfield); this becomes North Street. The ground is on the left after half a mile, after the athletics stadium.

From the West
Coming west along the A75 from Dumfries, turn right onto the B721 (signposted Annan), and follow into the High Street. At the traffic lights, turn left onto the B722, signposted Eaglesfield, then as above.

Car Parking
There is not a lot of car parking available at the ground; so it is a case of finding some street parking.

Annan Railway Station is located on the Carlisle to Dumfries line. The Galabank ground is about a 15 minute walk away from the railway station. To get there simply keep walking in a straight line away from the station, cross the High Street and keep heading straight ahead. You will pass 'The Shed' pub on the left (which is worth a visit) and a further five minutes walk and you will reach Galabank on your left.

Thanks to Kevin Hunter for providing the directions.

Queen of the South

The Club has ample space for wheelchair users at the front of the Main Stand.

Annan Hotels - Find and Book Yours And Help Support This Website

If you require hotel accommodation in Annan then first try a hotel booking service provided by Booking.com. They offer all types of accommodation to suit all tastes and pockets from; Budget Hotels, Traditional Bed & Breakfast establishments to Five Star Hotels and Serviced Apartments. Plus their booking system is straightforward and easy to use.Yes this site will earn a small commission if you book through them, but it will help towards the running costs of keeping this Guide going.

Map Showing The Location Of Galabank In Annan

Special thanks to Geoff Jackson for providing the photos of the Galabank football ground in Annan. Check out Geoff's Cumbrian Groundhopper blog. 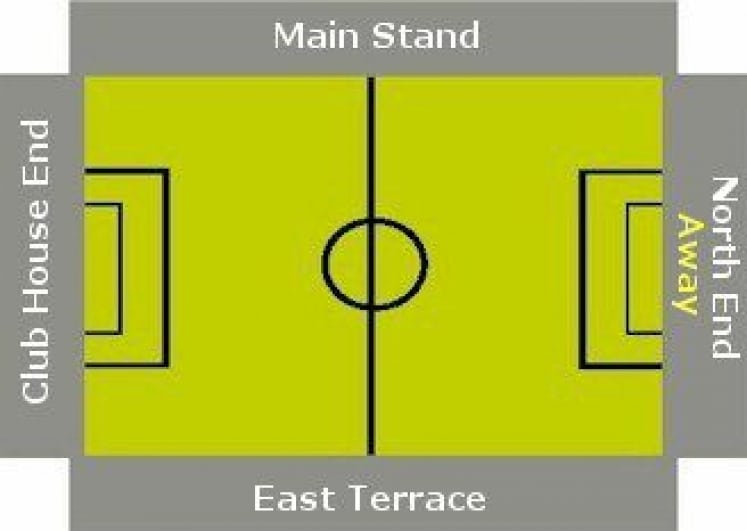