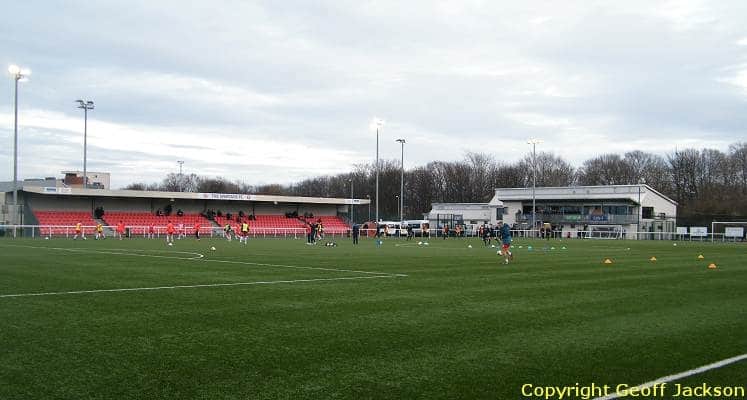 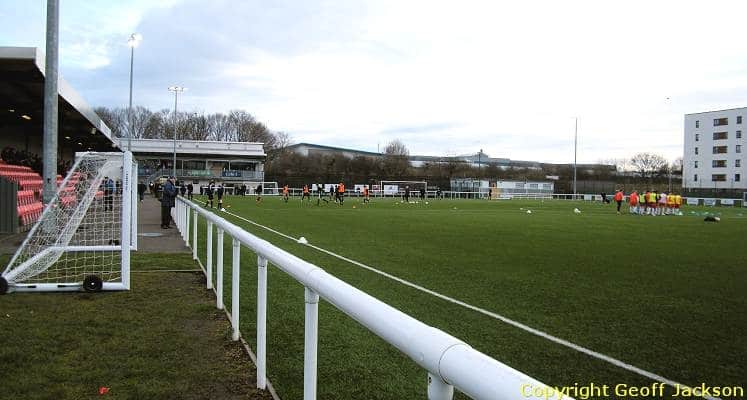 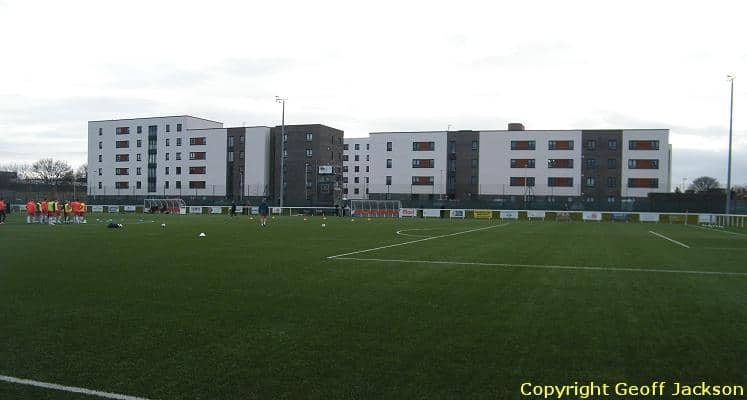 With Edinburgh City’s current Meadowbank Stadium home about to undergo a major refurbishment, the Club have had to seek another location for home games. The Club have agreed a three year groundshare of Ainslie Park Stadium, the home of Spartans FC, who were Edinburgh City’s main local rivals when both clubs played in the Scottish lowland League.

Ainslie Park Stadium is fairly modern having been opened in 2008 but is a small basic affair. Three sides are open areas that are consisted of perimeter fencing surrounded by a small hard standing or grassed areas, where fans stand to watch the game. One one side is a covered all seated Main Stand that has a capacity of around 500 seats. This stand which is comprised of six rows does not run the full length of the pitch, being just over half the pitch length. The roof of the stand is raised quite high above the seating area and at least there are no supporting pillars to contend with. It is though quite setback from the side of the pitch. Oddly the team dugouts are not located in front of this Main Stand but are housed on the opposite side of the ground. This leads to quite a procession of players and club staff across the pitch at half and at full time. There is also a precarious looking television gantry on this side.Beyond this side are some sizeable blocks of residential apartments that overlook the stadium. In addition, a number of houses overlook the ground from the North End. At the South East Corner there is a small structure that houses the changing rooms, Club offices and clubhouse bar. It has a raised balcony viewing area for Club Officials and Sponsors. The stadium has two rows of four floodlight pylons running down each side of the ground.

Apart from Spartans FC, the stadium is also home to Hibernian Ladies FC. The stadium has an artificial 3G playing surface.

The local council have approved plans to replace the current Meadowbank Stadium and Sports Centre, with a new facility. Works are expected to commence in early 2018. As part of these plans, a new athletics stadium will be created, featuring a running track surrounding a 3G artificial pitch, which can be used for football. The stadium would also include the construction of a new 500 capacity seated Main Stand. It is expected that works will continue until Easter 2020, with Edinburgh City FC returning shortly thereafter.

It unlikely that any league games will be segregated at Ainslie Park Stadium. If there is a need to segregate fans then visiting supporters are allocated specific seats on the North side of the Main Stand. Your entrance fee allows you stand or sit down at the ground. If you decide to stand then note at the North End of the stadium there is a small raised grassy bank, which gives spectators an elevated view of the match. The refreshments include a range of pies including a Macroni Pie £2. I have yet to attend a game at the stadium, but I am sure a friendly welcome awaits you. If you wish to feedback your experience to me of seeing a game there, then please email me at: contact@footballgroundguide.com.

There is no club house or bars located near to the ground. The closest is probably the Inverleith which is located around a mile away from the stadium on Ferry Road (going towards Leith).

After crossing the Forth Road Bridge and just before reaching the M90, take the left hand slip road onto the A90 towards Edinburgh, which then becomes the A902. After seven miles you will pass a Shell Petrol Station on your right and at the next roundabout take the third exit towards Leith and Newhaven which is Ferry Road (A902). After passing a Morrisons Store on your left, take the next left into Pilton Drive. The entrance to the Leisure Centre and Football Club are located down on the left after crossing a small railway bridge.

From the West & Glasgow

On reaching the end of the M8 take the A720 City Bypass North. At the next roundabout take the third exit onto the A8 towards Edinburgh City Centre. Then at the traffic lights (where there is a Shell Garage on one corner) turn left onto Maybury Road towards Forth Road Bridge/Leith. Go straight across at the next roundabout and on reaching the next traffic lights which is the junction with Queensferry Road, turn right towards City Centre/Leith (A90). Follow this road for three miles and as you pass a Shell Petrol Station on your right then at the next roundabout take the third exit towards Leith/Newhaven which is Ferry Road (A902). After passing a Morrisons Store on your left, take the next left into Pilton Drive. The entrance to the Leisure Centre and Football Club are located down on the left after crossing a small railway bridge.

Follow the A1 and then the A199 towards Leith. After passing through the centre of Leith and crossing the bridge over the Water of Leith, turn left at the traffic lights onto North Junction Road. At the next traffic lights turn right onto Ferry Road towards Forth Road Bridge/Glasgow (A902). Stay on Ferry Road for two miles. After passing the Rugby Club on the left, then at the next traffic lights just before reaching the Morrisons Store turn right into Pilton Drive. The entrance to the Leisure Centre and Football Club are located down on the left after crossing a small railway bridge.

There is some parking available to the Leisure Centre, otherwise street parking. Please note that parking at the nearby Morrisons Supermarket is restricted to two hours.

The nearest railway stations are Edinburgh Haymarket and Edinburgh Waverley, both of which are around two and a half to three miles away from Ainslie Park Stadium. Therefore really they are too far to walk, so either get a taxi (around £10) or if arriving at Edinburgh Waverley you can catch a Number 27 Lothian Bus, which drops you off outside the Morrisons Supermarket on Ferry Road close to the ground. You can catch the 27 Bus from ‘The Mound’ road which is close to the Waverley Station on the town side, by the Scottish National Gallery. The service operates every ten minutes on Saturdays and takes around 20 minutes to reach Morrisons. The bus costs £1.60 each way for Adults and 80p each way for Children. See the Lothian Buses website for more details.

Concessions apply to OAP’s, Under 18’s, Students and the Disabled, plus carer.

The Club have enjoyed a healthy non-league rivalry with Spartans FC. With promotion to the Football  League  it will remain to be seen with which Clubs a rivalry develops.

Map Showing The Location Of Ainslie Park Stadium In Edinburgh

Special thanks to Geoff Jackson and Jonathan Gallagher for proving photos of the Ainslie Park Stadium in Edinburgh.Check out Geoff’s Cumbrian Groundhopper blog. 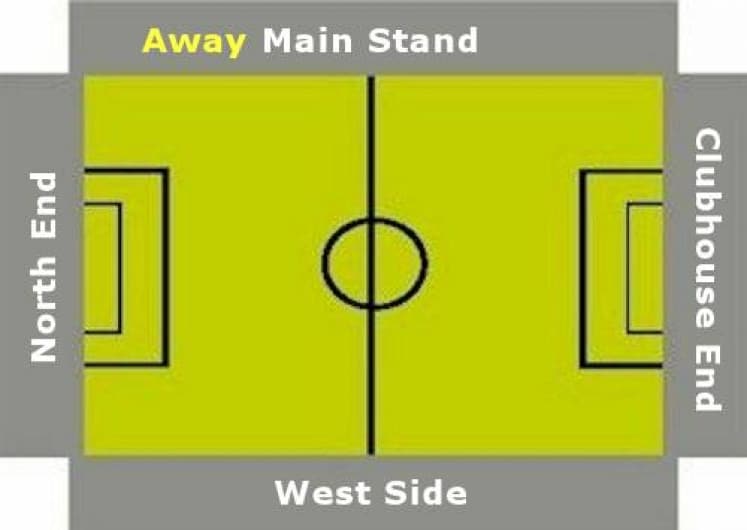