On one side of Ochilview Park, is the relatively new looking Main Stand. This small all seated, covered stand, runs for about half the length of the pitch and straddles the half way line. It has a couple of floodlights perched on its roof. Opposite to this stand the side of the ground is unused for spectators and just has the team dugouts and a row of small floodlights. At the Tryst Road End of the ground is good sized terrace, that recently has had a roof put on it, giving much needed shelter for the standing fans. On one side of this terrace can be seen a Social Club which is owned by the Club. The opposite East End of the ground is again unused for spectators. During the Summer of 2007 a new synthetic playing surface was installed at the stadium.

Sandy Reid adds; 'For the historians out there the first modern floodlit game in Scotland was played at Ochilview in 1951. Behind the ground looking towards the Ochils in the distance is the Tryst which was the largest selling market for farm stock for the drovers back in the 1700's and 1800's in Scotland'.

Generally there is no segregation of fans for league games. If segregation needs to be enforced, then away fans are predominantly housed in the covered Tryst Road terrace which is allocated specifically to them, whilst some seats are also allocated in the Main Stand. Normally a friendly welcome awaits the visiting supporter and I experienced no problems on my visit.

There is a Social Club on one corner of the Tryst Road terrace and a small bar under the Main Stand. Both welcome away supporters, although on occasions the Social Club may charge a small entrance fee, for non members. There are a couple of bars to be found in the nearby town centre (five minutes walk). Paul O'Shea adds; 'Right by Larbert Railway Station is the Station Hotel, which is featured in the CAMRA Good Beer Guide. On my visit they had some interesting beers from small Scottish microbreweries.'

From the West
Leave the M876 at Junction 2 and follow the A88 towards Stenhousemuir. After about three quarters of a mile turn right into Tryst Road. The ground is down the bottom of this road on the left. It is not the easiest ground to spot as it has no large floodlights that can be seen from a distance.

From the East
At Junction 7 of the M9 join the M876 going East bound towards Kincardine. At the end of the M876 take the third exit at the roundabout onto the A905. At the roundabout that is the junction with the A88, take the second exit onto the A88 (Bellsdyke Road). After around two miles turn left at the mini roundabout into Tryst Road for the ground.

Remember also to ignore the 'football traffic' signs around the area, as if you follow them you will eventually end up at Falkirks' ground. Street parking.

The nearest railway station is Larbert, which is just under a mile away from Ochilview Park. As you come out of the station, bear left down the main (King Street) road in front of the station. Continue down Kings Road and you will reach the ground on the left.

The Club operate a Category System (A & B & C) for the pricing of tickets, whereby the most popular games cost more to watch. Category A ticket prices are shown below, with Category B & C prices shown in brackets.

Concessions apply to OAP's and Students (proof of status must be shown).

Falkirk Hotels - Find and Book Yours And Help Support This Website

If you require hotel accommodation in Falkirk or Edinburgh then first try a hotel booking service provided by Booking.com. They offer all types of accommodation to suit all tastes and pockets from; Budget Hotels, Traditional Bed & Breakfast establishments to Five Star Hotels and Serviced Apartments. Plus their booking system is straightforward and easy to use. Yes this site will earn a small commission if you book through them, but it will help towards the running costs of keeping this Guide going. 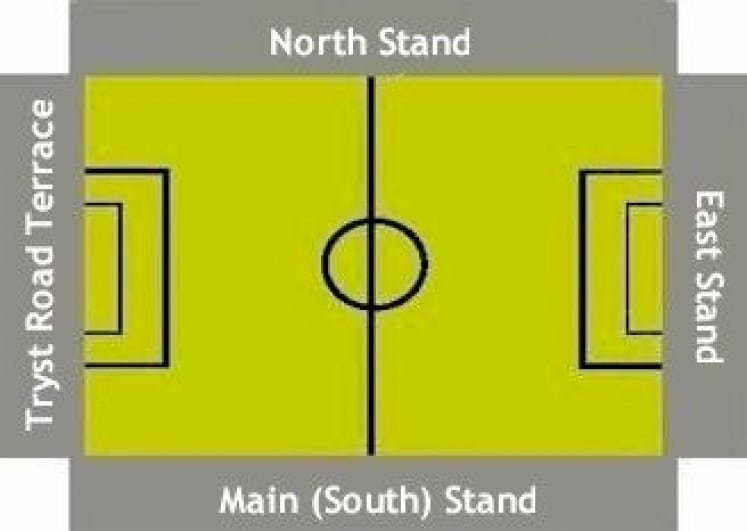