New Douglas Park as the stadium was originally known was opened in 2001 and is not far from the site of their former Douglas Park ground from which they left in 1994 (the club ground shared in the intervening years). Alas, nothing remains of the old ground to be seen, in fact, the site is now occupied by a Sainsburys supermarket.

The ground is largely comprised of two fair sized stands at one side and at one end of the ground. Both are covered and all seated. They are unusual, in terms of modern stands, in that they are both raised above pitch level, which means that spectators have to climb a set of stairs, to reach the seated area. These have been supplemented by a small covered temporary stand on the East side of the ground. This area has a capacity of 700 seats. There are also four striking floodlight pylons in each corner of the ground. During 2013 the Club installed a 3G artificial playing surface.

In July 2019 the ground was renamed the Fountain of Youth Stadium in a corporate sponsorship deal.

Away fans are normally housed in the North (Spice Of Life) Stand where the view of the action is good. In addition the temporary East Stand can also be made available. The views from this area are not great as there is a row of supporting pillars running across the front of it. Alan Redman a visiting Morton supporter adds; ‘there is plenty of legroom in the North Stand, but wrap up well in winter as being as the ground is largely open, the wind blows right through it’.

Ross Clark, a Hamilton fan informs me; ‘Despite having only the two stands at the moment, it’s possible to make quite a lot of noise from either stand. You kind of forget that there’s nothing on the other side of the pitch until the ball goes out and it takes the ball boys far too long to retrieve the ball from the far wall. (a few impatient staff have taken to just punting a new one on almost as soon as it happens). The evening matches in the dark have been better for atmosphere’.

Joe McCabe informs me; ‘There are two local bars at Peacock Cross, which is around half a mile away from New Douglas Park, near Hamilton West Railway Station. These are Bar West on Almada Street and The Tap Room, on Burnbank Road, although the Tap Room is more popular with home fans. Alternatively, opposite Hamilton West station itself is the Academical Vaults, but again (as the name would suggest) it is more orientated towards Accies supporters.’  Alternatively if arriving at Hamilton Central Railway Station then on Campbell Street, is the George Bar, which is listed in the CAMRA Good Beer Guide.

Leave the M74 at Junction 5, and follow the signs for Hamilton. You will pass the racecourse on your left and a large fire station on your right. At the first set of traffic lights, turn right into Caird Street. On your left will appear a fair sized car park, which you can park in (I believe it is free on matchdays) and embark on the five minute walk to the ground. The ground is down New Park Street, which runs beside the bingo hall. Or if you continue along Caird Street, you turn right, just before the traffic lights (and bingo hall) into New Park Street. You will come to the ground entrance on your left.

There is no parking available for supporters at the ground itself, unless you are a club official, or have a valid disabled permit. However, due to limited space even these should be pre-booked with the Club.

The Superseal Stadium is only a few minutes walk from Hamilton West Railway Station, which is served by trains from Glasgow Central. Andy Alston informs me; ‘From Hamilton West station there is a path leading off to the left which leads directly to the ground, which is only a few minutes walk away’. Please note that Hamilton Central Railway Station is located around a 30 minute (one and a half miles) walk away from the stadium.

Hamilton Hotels - Find and Book Yours And Help Support This Website

If you require hotel accommodation in Hamilton or Glasgow then first try a hotel booking service provided by Booking.com. They offer all types of accommodation to suit all tastes and pockets from; Budget Hotels, Traditional Bed & Breakfast establishments to Five Star Hotels and Serviced Apartments. Plus their booking system is straightforward and easy to use. Yes this site will earn a small commission if you book through them, but it will help towards the running costs of keeping this Guide going.

Map Showing The Location Of New Douglas Park In Hamilton 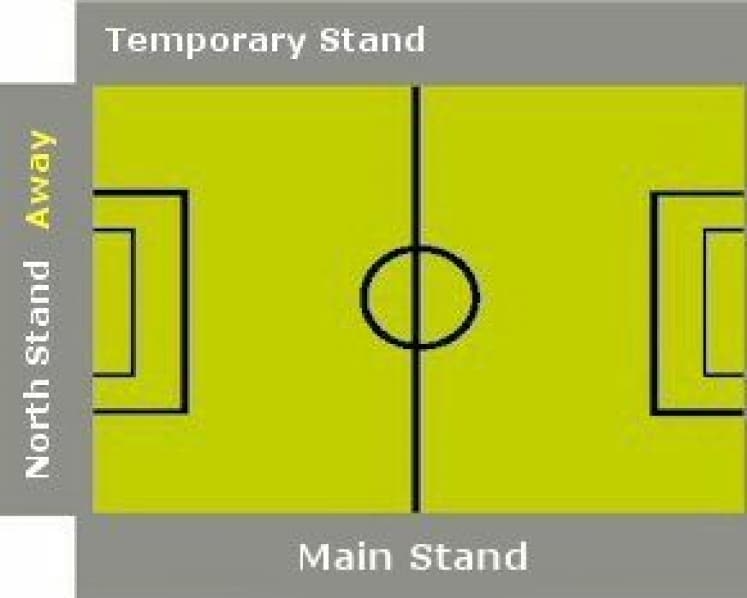