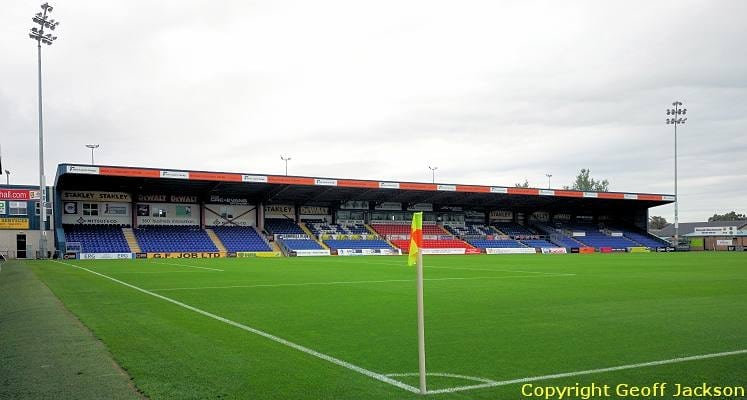 During recent years the Victoria Park ground has been transformed into a modern all seated stadium. Both end terraces have been replaced by covered seated stands and the East Stand at one side of the pitch has been extended towards the Jail End.

The West Stand on one side, is an attractive looking all seated, covered stand, with a row of executive boxes running across the back. This stand was originally opened in 1991, but was extended in 2000, so that the stand now runs for the whole length of the pitch. Opposite is the East Stand, a small, covered, all seated stand, which was built in 1995. An additional 538 seats were added to this stand (on one side) during 2012. Both ends are covered seated stands that were opened in 2012. The larger of these is the North Stand, which is given to away supporters. This smart looking single tiered stand is free of supporting pillars. Opposite is the Jail End, which is the traditional area for the more vocal home fans to congregate. It is a more simple affair and half the size of the larger North Stand. It is partially covered (to the rear) and has some supporting pillars running across its middle. The stadium is completed with a set of four modern floodlight pylons.

The ground was renamed the Global Energy Stadium in 2012 in corporate sponsorship deal, but it is still known to many fans as Victoria Park.

Away fans are primarily housed in the North Stand, at one end of the ground where just under 2,000 supporters can be accommodated. This stand is covered, all seated and the facilities good. For larger away followings then part of the West Stand can also be made available. Please note though that entrance to the ground is by ticket only, no cash is accepted at the turnstiles. You will need to buy your ticket from the ticket office, which is the dark red portacabin which is situated by the car park across the road from the West Stand.

Kevin Mort adds; 'Ross County is the friendliest sports ground I have been to. The fans are friendly, views from the East Stand (as a neutral I sat amongst the home support) are excellent and if the game gets dull, the Easter Ross hills in the background are magnificent. The ground is a just few minutes walk from Dingwall Station, but beware that trains south do not run until a couple of hours after the game. The pies are superb and the facilities good. The home fans generate plenty of noise from the Jail End. A very relaxed experience and thoroughly recommended'.

The ground is five minutes walk away from the town centre, where there are plenty of bars to choose from. Scott Armstrong recommends; 'The Mallard is a good friendly pub with excellent bar food. It is located by the railway station and only 300 yards from Victoria Park'.

Take the A835 towards Dingwall. On entering Dingwall, about 200 yards after the first set of traffic lights, turn right onto Hill Street and then right again onto the High Street. Then take the first left onto Ferry Road (technically a left turn into Achany Road, as Ferry Road actually runs straight ahead just to the left of the War Memorial). Go over the Railway Bridge and then take the first left for Victoria Park. There is a car park, on the left just before the stadium which costs £2. If you get lost, follow signs for the railway station, as the ground is right by it.

Dingwall Railway Station is only a few minutes walk away from the Victoria Ground. Brian Scott informs me; 'If there is not a train available at a convenient time for returning to Inverness after the match there is a good bus service which leaves from either the town centre or on the road outside the railway station. Bus number 25 is the quickest as it takes the main road, whilst the number 28 takes a similar route to the train.'

Dingwall Hotels - Find and Book Yours And Help Support This Website

If you require hotel accommodation in Dingwall then first try a hotel booking service provided by Booking.com. They offer all types of accommodation to suit all tastes and pockets from; Budget Hotels, Traditional Bed & Breakfast establishments to Five Star Hotels and Serviced Apartments. Plus their booking system is straightforward and easy to use. Yes this site will earn a small commission if you book through them, but it will help towards the running costs of keeping this Guide going.

Hotels and Guest Houses In Dingwall

Map Showing The Location Of The Global Energy Stadium In Dingwall

Special thanks to Owen Pavey for the layout diagram and to Hugh Grant and Geoff Jackson for the photos of the Global Energy Stadium, Ross County.