After spending 115 years at Love Street, the club moved half a mile to this purpose built stadium in 2009. The 'new' St Mirren Park, as it is known was built by Barr Construction at a cost of around £8m. The ground is comprised of four separate stands and although it probably won't win many design awards, it is at least modern and functional. The stands on three sides are all single tiered, have large windshields to each side and are of the same height. The East Stand on the remaining side, is taller than the others, but contains a smaller amount of seating, with a large paneled area behind that rises up to the roof. This stand also has the team dugouts in front of it. Although this is the Main Stand at the ground, the television cameras are located opposite.

The was called St Mirren Park but in 2018 it was renamed the Simple Digital Arena in a sponsorship deal.

Away fans are located at one end of the stadium in the North Stand, where just over 1,600 supporters can be accommodated. It is expected that for Old Firm games, that sections of the West Stand will also be made available. As you would expect from a new stadium, the facilities and playing action are good. However, one slight drawback is that that the fans are set quite back from the playing action, as there is a large perimeter area surrounding the pitch. Also the St Mirren Park's proximity to Glasgow Airport means that airplanes can be frequently be seen overhead taking off and coming into land.

Colin Weir informs me; 'There are very few pubs near the ground at all, with the ground being  in between a residential and industrial area. Away coaches are still parking on Clark Street where they did for Love Street so it is likely that away fans will continue to drink in the pubs off Greenock Road. Other than that St Mirren fans are likely to continue to drink in the existing pubs around Love Street and the Town Centre simply remembering to leave for the match 10 minutes earlier than they used to!'

There are a couple of pubs near to the old ground, although with the lack of pubs close to the new stadium many may drink in the town centre before heading to the game. The Wee Barrel on Love Street itself is a smallish two roomed pub, which gets very busy before games, but on my visit there was a good mix of home and away support and the service was good. George Clarke adds; 'The Cottage Arms next to a Chinese takeaway just off Greenock Road has long been a popular haunt for away fans, as the away coaches park up near there on Clark Street and it is only a few minutes walk away from the ground'. Near Paisley Gilmour Street station is the Tile Bar on Smithhills Street.

In the town centre, which is around 3/4's of a mile away. Peter Balmforth, recommends; 'Just outside the station entrance, is a Wetherspoons outlet called the 'Last Post'. However please note that fans are not admitted wearing colours, so remember to roll up your scarf and stick it in your pocket'. Rene a visiting Celtic supporter informs me: 'I found the Wallace Bar on Causeyside Street in the town centre, to be a friendly enough place to enjoy a beer'.

The ground is particularly easy to get to due to its proximity to the M8.

Exit the M8 at J29 St James Interchange signed A737/Glasgow Airport/Paisley. At the roundabout both lanes of the slip road lead around to the A726 Greenock Road towards Paisley and East Kilbride which is the 3rd exit. Directions are then as M8 East below.

Exit the M8 at J29 St James Interchange. It is best to be in the 2nd lane on the viaduct, as the inside lane leaves at J28a just before the junction 29. Turn left at the traffic lights on the roundabout onto the A726 Greenock Road (signed Paisley and East Kilbride). At the second set of traffic lights from here, turn right onto McFarlane Street which double backs on itself. After 300m the road has a sharp left bend onto Greenhill Road and the Ground is a further 300m away. The ground it usually signed from the St James Interchange.

Fans travelling along the A737 from Ayrshire, can also exit at St James Interchange, however leaving and joining the road at Linwood may help beat the traffic. Exit at Linwood, and turn right on the roundabout towards Paisley. After passing the Asda, at the 3rd roundabout turn left onto Barskiven Road. Follow this road for about a mile going straight across two roundabouts. After the second you will be on Ferguslie Park Avenue, the road then turns to the right and the ground is about 400 yards away on your right.

John Schiavone informs me; 'There is a large matchday car park located directly behind the West Stand that costs £5. It is accessed via Ferguslie Park Avenue.' Otherwise street parking.

Thanks to Colin Weir for providing the directions.

The nearest railway station is Paisley St James, which is situated almost just across the road from the Paisley 2021 Stadium. It is a 17 minute journey from Glasgow Central Station.

Colin Weir adds; 'If you are coming to the ground by train Paisley St James has a half hourly service on the Glasgow-Gourock line and is located on Greenhill Road directly behind the away stand. Come out of the station onto Greenhill Road and the stadium is directly on the left. A campaign by fans of the club hopes to persuade Transport Scotland to rename the station Paisley St Mirren, however for the near future Paisley St James is where you should alight.

Paisley Gilmour Street is one stop away from St James and around 15 minute walk from the ground, but has a much more frequent service with trains every 10 minutes.

At the bottom of the stairs from the platforms turn right to take the back entrance to Old Sneddon Street and then turn left. Once you are at the traffic lights at the Court and Love Street, continue along St James Street and onto Underwood Road, where you pass under the railway. 400m further along you pass a pedestrian crossing and the Royal Mail Centre on your right at the corner of Greenhill Road. Head down Greenhill Road and the ground is 200m on your left.

Most service buses to Paisley also stop next Paisley Gilmour Street station and directions are the same for them. It is possible to catch a number 64 Arriva bus to Ferguslie Park from Gauze Street in the Town Centre which takes around 5 minutes and passes very close by to the ground'.

Concessions apply to over 65's, under 18's, full-time students and the unemployed.

Paisley Hotels - Find and Book Yours And Help Support This Website

If you require hotel accommodation in Paisley or Glasgow then first try a hotel booking service provided by Booking.com. They offer all types of accommodation to suit all tastes and pockets from; Budget Hotels, Traditional Bed & Breakfast establishments to Five Star Hotels and Serviced Apartments. Plus their booking system is straightforward and easy to use. Yes this site will earn a small commission if you book through them, but it will help towards the running costs of keeping this Guide going. 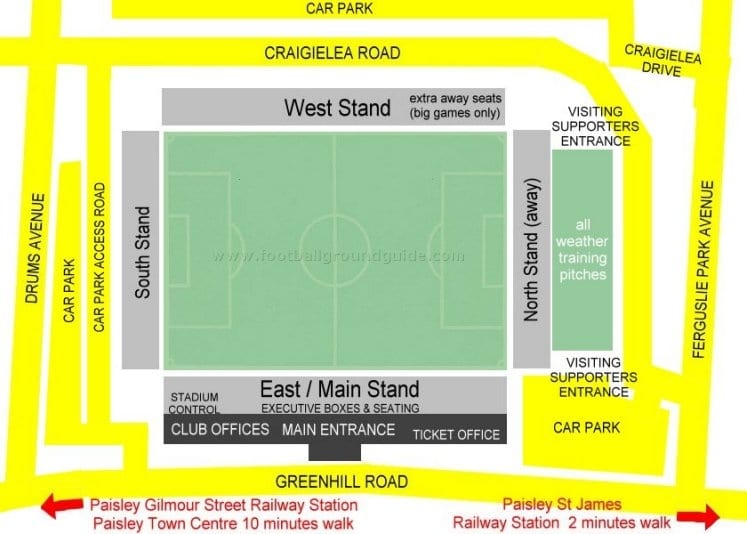