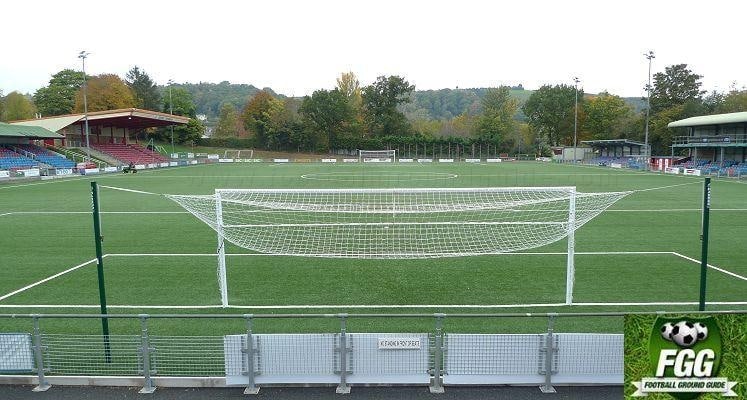 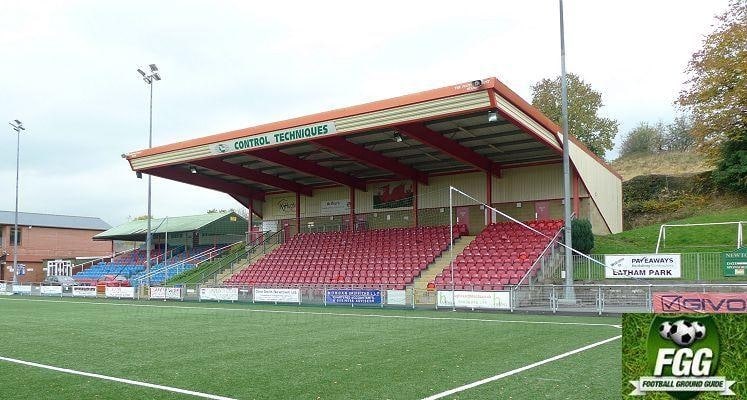 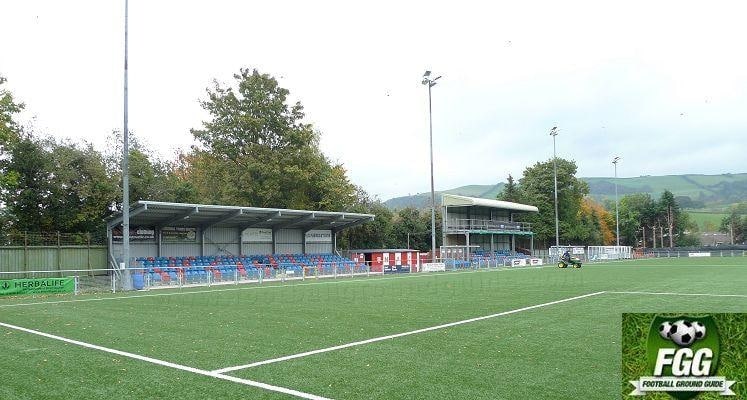 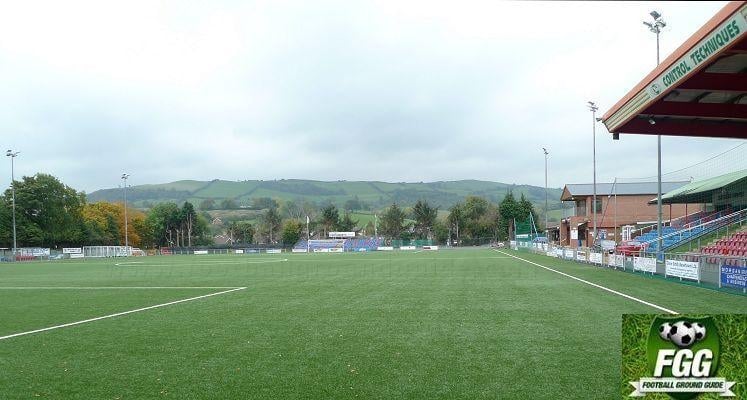 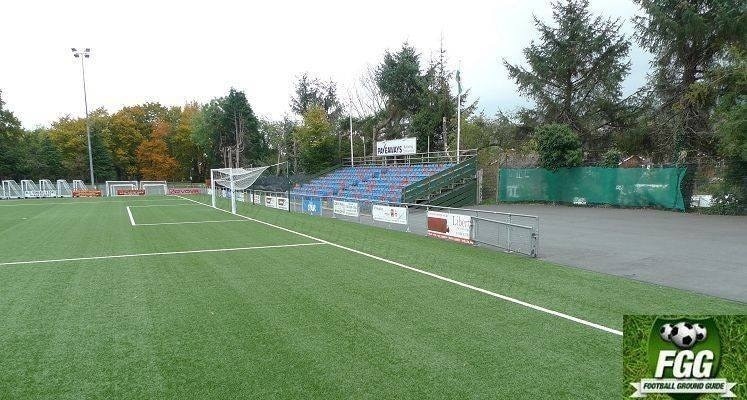 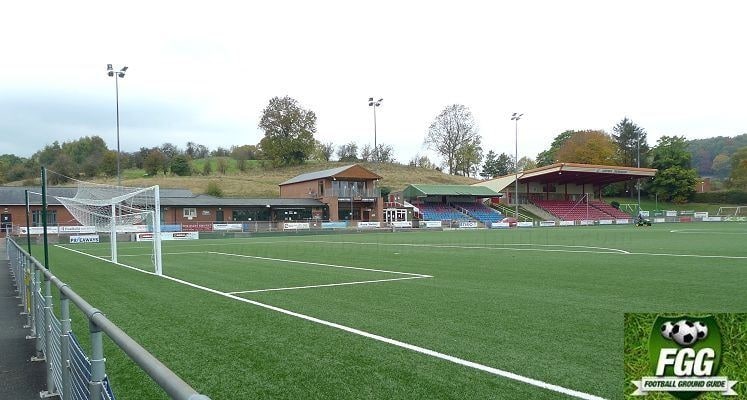 Latham Park is a bizarre ground, one of which is far easier to show in pictures than describe In detail. The stadium is located half a mile to the west of the town centre, and is sandwiched between two housing estates, a police station and a rolling hillside. Entering the ground through the gates at the Park Lane/North end to the left we find a combination of two stands squeezed between the corner post and the pitch centre line. A low, narrow modern cantilever stand holds 200 blue seats on a single tier. This leads to a wooden turnstile block and a further narrow seated stand with the tv and commentary gantry perched on its roof.

The remaining areas of this, the Police Station side of the ground consist of flat standing areas with a hedge of green providing a pretty border. This leads onto the Llanidloes Road end, which is a tree lined flat standing area with an open seated structure behind the goal, backing onto a housing estate. Looking to the right and the near Park Lane is currently a narrow flat standing area behind the goal, its border also formed by a hedge. This leads us onto the fascinating main stand side of the ground, which has as its backdrop a hill of green pastures. Looking from the Park Lane end corner post to the left the first structure is the biggest in the ground, the 400 seat modern cantilever stand with its roof which seems to be out of proportion to the seating deck beneath. Having said that, views from the stand are unobstructed and if its rains you stay dry. There is then a small gap to the old Main Stand which sits roughly on the pitch centre line. Despite being only two thirds the size of the new stand this low structure holds around the same number of seats, though its low roof only covers the rear few rows of seating. Looking further to the left of this stand is the newest structure in the ground, the 2 storey chalet style executive suite which was built in 2009.

This leads to two more low structures leading up to the corner post of the Llanidloes Road End, the club offices and the Latham Centre, a 200 capacity function suite which brings the club much needed income on non-match days. The stadium is named after local sporting hero Captain George Latham who played for a number of clubs including, Newtown, Cardiff City and Liverpool. During the Summer of 2014 a new 3G pitch was laid.

As far as we are aware visitors are allocated the open seating at the South/Llanidloes Road end of the ground. To reach this side of the ground from the north end follow the footpath down the side of the Police Station and then the path at the edge of the housing estate. The temporary seating is behind the goal, and despite being open to the elements is fairly well sheltered from wind and rain thanks to a row of trees at the rear. Refreshments available inside the ground include; Cheeseburgers (£3), Burgers (£2.70), Sausage or Bacon Bap (£3), Egg Bap (£2), Pasties (£2), Hot Dogs (£1.70) and Chips (£1.30).

There is a Clubhouse at the ground which welcomes visiting supporters and serves a range of drinks, including normally one locally produced real ale. There are also plenty of pubs located in the town centre, which is about a 5-10 minute walk away from the ground. These include a Wetherspoons outlet called the Black Boy on Broad Street. Also of note is the Sportsman on Severn Street and close to the Railway Station, the aptly named Railway Tavern located on Lower Kerry Strret. Both these latter pubs are listed in the CAMRA Good Beer Guide.

Please note that the traffic through the centre of Newtown along the A483 can be quite congested, so allow a little extra time for your journey. The good news is that a by-pass is being constructed around the town for future use.

From The East
Follow the A483 Pool Road towards Newtown town centre. When you reach a set of traffic lights with the large St Davids Church on the left, turn right at these lights into New Church Street. Turn left just past the United Reform Church into Park Street. Then take the second right into Park Lane which leads up to the ground entrance and car park.

From The West
Follow the A470 Llanidloes Road towards Newtown town centre. The road merges with the A483,just past this fork junction take a left turn into Park Street, then left again into the narrow Park Lane. The lane leads to a car park and entrance gate at the northern end of the ground.

From The South
Follow the A483 towards Newtown into Dolfor Road. The road merges with Llanidloes Road on the approach to the town. Just past the junction, turn left into Park Street then left again into the narrow Park Lane. The lane leads to a car park and entrance gate at the northern end of the ground.

Newtown Railway Station is situated on the Mid-Wales forked branch lines Shrewsbury-Machynlleth Aberyswyth service and the Shrewsbury-Barmouth-Pwllheli service. Since both routes are single lines services are restricted to every 2 hours.

Latham Park is around a half a mile away, so about a 10-15 minute walk. When you come out of the station building turn left and follow the narrow lane alongside the railway line. You will pass the church on the right hand side, take the first right turn off the narrow lane and at the end of this short road turn left into New Road. After a minute cross over the road and turn right into Park Street than take the narrow lane left into Park Lane. Follow this lane as it leads round the rear of the Police Station entrance and as the road ends in a car park the ground entrance gates are on the left hand side.

There are also local bus services between Shrewsbury, Newtown and Aberystwyth. However these services also only run every two hours:

A pleasant 10 minute walk. Follow the cul-de-sac bus stop road away from Iceland food store, at the Welsey Street junction turn right into the B4568 Back Lane,. After 2 minutes walk turn right at the crossroads into Park Street, then after a further two minutes walk turn right into Park Lane and follow the narrow lane round the back of the police station. The road ends in a car park with the entrance on the left hand side and a pathway leading round to the other sides of the ground.

Aberystwyth and Bala Town are the nearest Premier League rivals. Further down the league Caersws and Welshpool are also local rivals.

Newtown Hotels - Find and Book Yours And Help Support This Website

Map Showing The Location Of Latham Park In Newtown

Special thanks to Owen Pavey for providing the information for this page as well as the layout diagram plan of Latham Park Newtown.

Be the first to leave a review of Newtown! 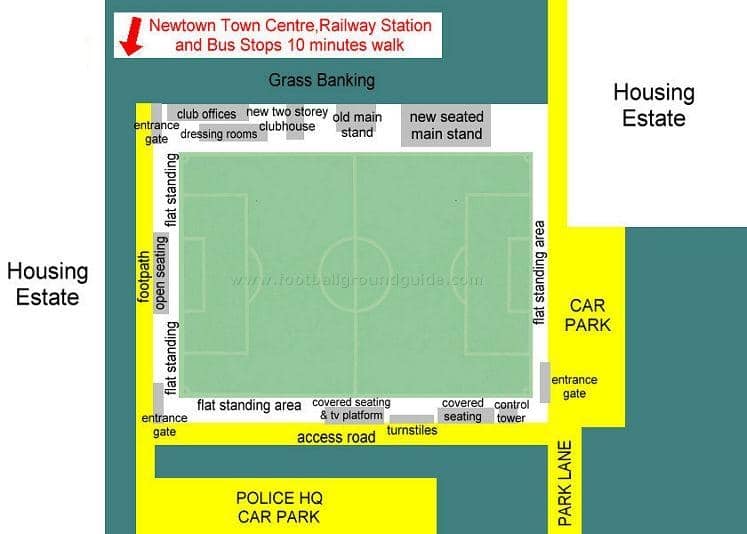