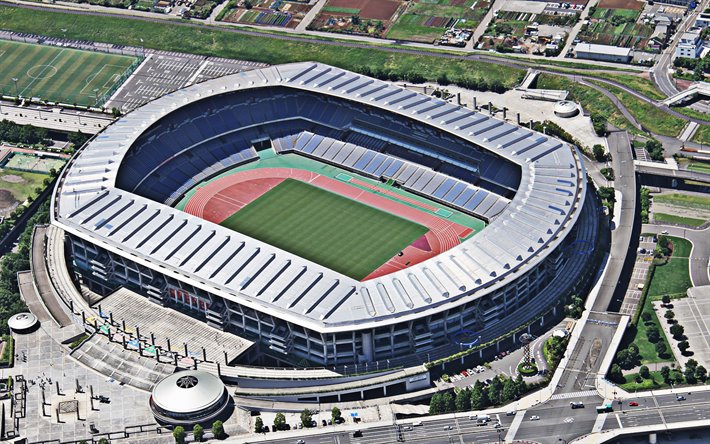 The International Stadium Yokohama is the largest stadium in Japan. After a construction work that went on for almost 4 years, the stadium opened its doors in 1998. As one of the centrepieces of the World Cup 2002, this ground has picked up a lot of history and heritage already. Apart from hosting football, this ground is also frequently used for American football, rugby, and athletics. There are two big screens that are installed on the side stands. These are able to offer excellent views of the pitch action even if the views, by default, are extremely good from every stand.

The ground has four distinct stands with each of them having separate gates. Irrespective of the get used by a fan, they would end up on the fourth floor, which acts as the lowest floor with a spectator. This unique layout is also accompanied with plenty of entrances that are adjacent to the seats. There are shops and toilets within the stadium. These tend to be less crowded on the fifth floor rather than in the fourth, which acts as the base for entrance. The overall experience from the stadium will be a positive one, as it is very close to the city centre. There are a ton of options to experience new the stadium, while the ground itself is relatively modern and has a good number of convenience facilities.

The comfort offered by the stands and seats is extremely good. There is an inclination of 30° in the upper stands for excellent views.

The International Stadium Yokohama is located in the northern part of the city – about 6 km away from the city centre. The ground also happens to be almost 10 km away from the Chinatown region. It is not far away from Tokyo, as the city centre lies only about 25 km away. This makes for a convenient access to the Nissan Stadium by car. If there are any difficulties, visitors can input the following address into the satnav:

Upon reaching the ground, visitors will come across multiple car park facilities. There are three major options just outside the ground and these facilities offer a combined capacity of more than 600 vehicles. It costs just over 400 yen for the first 120 minutes, while every additional 30 minutes will cost 100 yen. While these are the biggest facilities, visitors can also make use of many small parking lots that are available in the vicinity of the stadium.

The best access to the Nissan Stadium provided through train. There are three key lines that supporters can utilise: Yokohama subway blue line, JR Yokohama line, and the Tokaido Shinkansen line. While using the JR Yokohama line, fans can get down at the Shin-Yokohama Station or Kozukue Station. The latter is the closest to the ground and it is only a seven-minute walk away.

For fans who are taking the subway blue line, there would be a 12 minute walk to the ground. The Tokaido Shinkansen line will drop off fans at the farthest away from the ground, as it is a 14 minute walk away. For those who want to grab a drink or two while arriving to the stadium, the Shin-Yokohama Station is the best bet since it has a good number of restaurants and stores.

The tickets for watching Yokohama F. Marinos can be picked up online. An official club store located in the city centre might also be a good choice. Furthermore, there are plenty of convenience stores and websites that provide access to tickets, which typically range from around ¥2500 to ¥5300 depending on the location and the opponent. If someone wants to pick up a ticket for sitting behind the goal, they would be spending the least figure. At the same time, the main stand’s long sides tend to be the most expensive at around ¥5500.

There are several facilities available for disabled fans. A reserved parking spot can be availed at the ground by those who have a wheelchair ticket. There are special stalls available for disabled fans, while a wheelchair rental service can also be availed. Other facilities open for such individuals would be the opportunity to use a service dog, elevator, slope, and more. As one of the modern stadiums in Japan, the International Stadium Yokohama is a ground that takes such fans into account.

Fans are allowed to tour the Nissan Stadium from within thanks to the presence of guided tours, which will take individuals through the player tunnel, exhibition areas, dressing rooms, VIP areas, and more. Information about the availability of these tours is available on the official site. The price of the tour differs for an individual and a group. An individual would have to spend ¥500 for a ticket while children have to purchase a ticket worth ¥250. There will be a reduction of ¥100 for an adult ticket and ¥50 for a junior ticket when tickets are purchased for a group of now than 20.

The length of the stadium tour will be around 60 minutes and there are different starting times that can be requested at the time of a ticket purchase.

Be the first to leave a review of Yokohama F. Marinos (Japan)!