Anfield Expansion Set To Be Bigger Than Expected

Ever since the world got its first look at the new Tottenham Hotspur Stadium on April 3rd, 2019 it’s fair to say that perceptions of stadia up and down Britain have drastically changed. It probably wouldn’t even be unfair to say that some almost feel inadequate about their longstanding football homes when compared to Spurs' new ground. Spurs really did break the mould when they built their new home and it’s no wonder the architect of the Tottenham Hotspur Stadium branded Daniel Levy his ‘most demanding client ever’. Whenever a chief executive says he intends to build the best football stadium in the world, one should begin preparing to burn the candle at both ends.

As it happens, it now seems that Levy’s trailblazing approach has influenced the chiefs at Liverpool now that the powers that be have decided to let their permit for a planning application for a 4,000 seat expansion to the Anfield Road stand expire in order for the redevelopment to be even bigger than initially expected. The plan is to make the expansion even larger as they intend to show more ambition than just pushing Anfield's capacity past 60,000. According to Liverpool’s CEO, Peter Moore, 4,000 is not a sufficient enough number after all, which means they will go back to the drawing board.

Moore’s words will be received with a mixture of excitement but also slight trepidation as stadium expansions normally mean quieter transfer windows. During Spurs’ new build they didn’t spend a penny and the cynics will now allude to the fact that the Reds have only forked out £1.71m so far this summer. The more positive-minded will remind you Liverpool are only at 5/2 to win the Premier League in sports betting and still in great shape. In fact, a large contingent of the Anfield faithful will tell you that the Reds don’t have to spend anything after enjoying a record-breaking season last year that should have by rights, been enough to win the league. You’d have to admit that they are probably correct after Jurgen Klopp skillfully went about addressing Liverpool’s weaknesses over the last 18 months with the signing of Virgil van Dijk from Southampton and Alisson Becker from Roma.

At the end of the 2018/2019 campaign, a solitary point was enough for City to win back-to-back titles but had the ball bounced more favourably for Liverpool over the course of a season, that was ultimately decided by the finest of margins, it could have been them that won the league. But there is a genuine belief the Reds can go one better now without changing much and really, it feels like it is only a matter of time before Klopp leads his charges to the title.

So, with the above in mind, now does seem the opportune time for Liverpool to focus on increasing the size of Anfield with matters on the field of play the strongest they have been for many a season. An interesting subplot to Liverpool’s news that they will let their current permit to expand expire, is Everton’s announcement that they plan to build a £500m new stadium.

Being outdone by Spurs is one thing but playing second fiddle to the blue half of the city is just not an option. The Toffees’ new ground will be 2,000 seats fewer than Anfield's current capacity but considerably newer and more modern. This presents a unique challenge to the Liverpool hierarchy as they now try to keep Anfield on a par with the latest grounds in England whilst increasing the size.
Over the course of Anfield’s 135 years, it has undergone countless upgrades and changes but despite its age, the ground hasn’t looked out of place in the new era of modern football. That could begin to change with clubs seemingly happy to leave stadiums they have spent their entire history at in order to enjoy the elegance, efficiency and financial gains a new stadium brings. 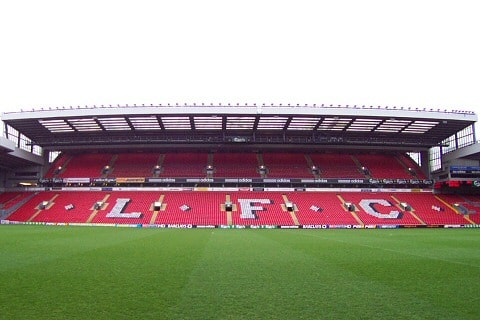 Indeed, having decided to stick with Anfield by instead focusing on upgrading rather than moving, Liverpool have brought about a new set of challenges for themselves as they try to keep their home relevant as the world changes around them.

In Jamie Webster’s song Allez Allez Allez, now a Liverpool anthem, of course, there is a part that goes “we’re never going to stop”, with Webster referring to the Reds’ insatiable appetite for trophies as they traverse the continent. Fittingly, Peter Moore and his fellow execs seem to have adopted those lyrics as their mantra when it comes to Anfield, the upgrades don’t and in all honesty, can't stop anytime soon.

FootballGroundGuide » News » Anfield Expansion Set To Be Bigger Than Expected