Best OF The 92 Survey Results – Best Grounds For Away Fans

Following on from last month when we announced who you considered being the Best Grounds in the Premier and Football Leagues, then we can now announce the top five grounds that have been voted as the best for away fans to visit out of the 92*. This was a result of a survey undertaken on this website and through readers of our good friends at Football Weekends Magazine. Thanks to all the fans that took part and after tallying up the many thousands of votes, here are the results: As well as having great facilities, the concourses themselves are particularly spacious and the queues at the refreshments kiosks never too long, the Club have tried hard to extend a warm welcome to visitors. They were one of the first clubs to put up posters thanking away fans for making the trip. Plus there are nice touches too; the lighting around the concourse can be changed to reflect the visiting teams colours, match highlights featuring the away side are played on screens on the concourse and at one time the Club would stock a real ale that was brewed in the area that the visiting team are from.

Inside the stadium way fans have nice padded seats, good leg room and general views of the playing action. Plus when you add a loud PA System, with great stadium acoustics and a vocal home support, then you can see why the Amex has come out tops in our poll.

Runners up in our poll and the top destination for away fans to enjoy football in London is Craven Cottage the home of Fulham FC. The Cottage as it called by the locals,  has long been a popular away trip in the capital. Always a relaxed visit, Craven Cottage is set in a pleasant area on the bank of the River Thames and most visiting fans enjoy the stroll from Putney Bridge Underground Station along the Thames through Bishops Park to the ground. There are also a number of pubs in the area that welcome away supporters and that adds to the quality of the day. Fulham normally give a good allocation of tickets to visiting supporters and it also not uncommon once this allocation has sold out for away fans to purchase tickets in the adjacent ‘neutral’ section in the Putney End Stand. This normally results in the visiting team having a large than normal away support, which helps boost the atmosphere. The Craven Cottage ground itself oozes character, with a mixture of old and new stands, plus the Pavillion building in one corner (often called the Cottage), makes the stadium unique and a memorable one. It also testimony to the ground and the club, that it is one that away fans often want to revisit. 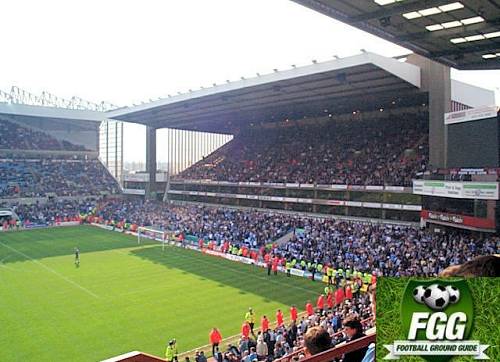 In fourth place in our survey is Villa Park. The Midlands ground although largely modern in construction still has a traditional feel to it, one that is liked by visiting fans. Whilst the Etihad Stadium, the home of Manchester City was ranked fifth in our survey. The Etihad Stadium was expanded a few seasons back, with a large additional tier being added to the South Stand, which was also at the same time refurbished. This has resulted in excellent facilities for away fans and if seated in the upper tier, fantastic views of the match and stadium.

So there you have it, the five best away grounds to visit in the country, do you agree?

* As Tottenham Hotspur are currently ground-sharing Wembley Stadium they were not included in the poll. With a new a White Hart Lane opening for next season, it will be interesting to see how away fans rate it then.