The new Brentford Stadium looks to be well on its way to be completed on time for the start of next season. The new 17,250 capacity stadium is being constructed at Lionel Road, which is located in-between Kew Bridge Railway Station and the M4, around one mile from Griffin Park). This photo below shows the proximity of both Griffin Park and the new stadium. It was snapped by Bob Connor who took it from a flight going into London Heathrow. Griffin Park is on the left of the picture and the new stadium over on the right. Works look to be progressing well on the new stadium and it looks well on course to be ready for the Club to kick off the new season in August next year. A name for the new stadium is yet to be announced but is likely to be a corporate sponsor. The video below (courtesy of the Brentford FC Drone and made publicly available via YouTube) has some great footage of the new stadium, both inside and out. Although personally I don't like the 'Polka Dot' multicoloured look of the seating, that I note seems to be the latest fad at new stadiums both here in the UK (Windsor Park Belfast and the new York Community Stadium) and in Europe. Apparently the idea is that if the stadium is half empty the 'Polka Dot Effect' makes it look if there are more spectators in attendance then there are, which keeps the TV companies happy (as who wants to watch a televised match at an empty stadium?). Being cynical then perhaps if this is a success then they won't need the fans to go to the game after all, but instead, pay to watch it at home or at a pub?

The new stadium, as can be seen, does look a little different in design to most recent new builds. Plus the mounting of large screens on the roofs either side of the halfway line, is also a unique feature. The stadium should be popular with away fans as it is situated in a reasonable part of London and there are some nearby pubs that overlook the Thames. Below is an external photo of the stadium provided by Martin Pither: 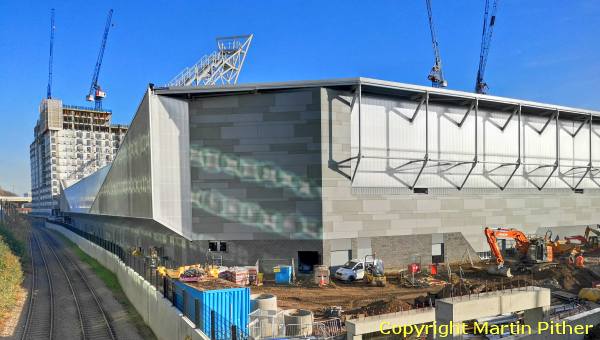 So if you have never been to Griffin Park and or haven't been for quite a while then try and get along to see a match before the end of this season. As it won't be long before the bulldozers mover to in and another classic looking football ground disappears.