The Grandstand Plymouth On Schedule To Open Jan 1st

Following a long waited 18 months, main contractors GL Events UK are handing over the newly refurbished Grandstand back to the Club. Although internal fitting works are set to continue, the club expects to now undertake a number of tests in order for the Grandstand to be awarded a safety certificate. The most notable of these is when around 40% of the stand will be opened for a women's match between Plymouth Argyle and Watford on Sunday, December 8th. This will then be followed by half the stand being open for the first team fixture against Morecambe on December 14th and three-quarters open for the Stevenage match on December 29th. If things go according to plan then the stand will be fully open for the League Two fixture against Swindon Town on January 1st, 2020. The stand will have a capacity of 5,403 seats and has new corporate facilities, which will open up a new income stream for the Club. The Club will also gain around 2,000 extra seats with the overall capacity of Home Park rising to around 18,600.

The Refurbished Grandstand
(Thanks to Greensonscreen for the photo below) 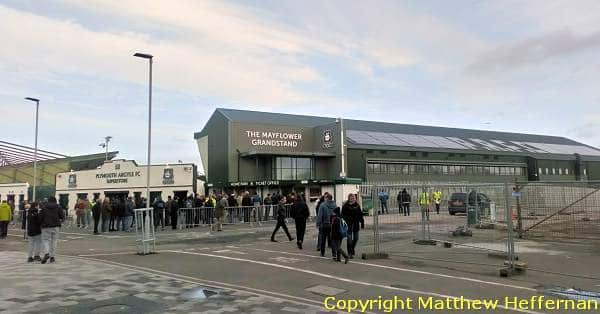 The original Grandstand (also known as the Mayflower Stand) was opened in 1952 after the previous Grandstand was destroyed by bombing in WW2. Although not designed by the famous football ground architect Archibald Leitch, it was certainly inspired by his designs elsewhere. So much so that in years to come many mistakenly believed that the Grandstand was his work and that it pre-dated the 1952 opening date. The Wooden Seats Inside The Old Grandstand The Club have been wanting to do something with the Grandstand for some time and had at one time proposed that a new stand be built to replace the existing structure. But with different club owners and lack of finances, it never got off the drawing board. For some, the current proposal that the existing stand is refurbished rather than being totally rebuilt was a disappointment. However considering that this refurbishment is costing around £6.5m, then this figure is not that much different from building a new stand. Probably, more importantly, a new stand may have looked quite bland, whereas this refurbished stand, still retains some character and maintains a link with the Club's past.