Heart of Midlothian have received planning permission to build a new Main Stand at Tynecastle. The new Main Stand will have a capacity of 7,290 seats. It will also feature Executive Boxes, Corporate Hospitality areas, the team's changing rooms and Club offices. 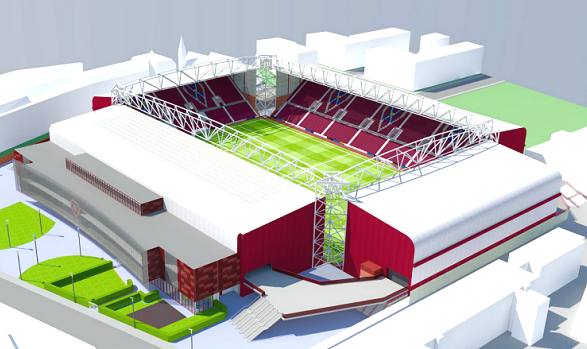 It is expected that works will begin next month with the new stand opening in September 2017. This will bring the capacity of Tynecastle to just over 20,000. It is believed that the new stand will cost on the region of £11m to build.

The old Main Stand that the new one will replace has been in existence for 97 years, having first opened in 1919. Works had commenced building the stand in 1914, but were suspended for the period of the First World War. The Main Stand was designed by prolific football ground designer of the time Archibald Leitch, who designed many grounds and stands across Britain, including Ibrox Stadium Glasgow, Hillsborough Sheffield, Fratton Park Portsmouth, Hampden Park Glasgow, Windsor Park Belfast and Cardiff Arms Park.