Being a football ground enthusiast, I enjoy visiting grounds not only to watch games, but also to take a look around on non-matchdays. So I like from to time to time, to go on one of the official club tours, to get a peek behind the scenes. Although I have been to Stamford Bridge many times to see matches, stretching back to first standing on the open South Terrace as an away fan in the late 1980's, this was the first time that I had embarked upon an official tour.

Having pre-booked my tour ticket online at a cost of £19 (even stadium tours don't come cheap nowadays) I made my way down to London on a what was a pleasant sunny Saturday afternoon in June. On arriving at Stamford Bridge, having first taken a London Underground train out from Central London to Fulham Broadway, I was pleasantly surprised to see a number of activities taking place in the club car park for youngsters to enjoy. These ranged from the use of Playstations to practice nets and all seemed to be free of charge. There were quite a few kids in attendance and I thought that this was a great way to involve the local community. 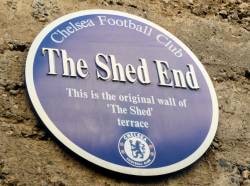 Having walked around the perimeter of the ground and viewing part of the original wall that formed the old Shed Terrace, which is marked by a blue plaque, and admiring the statue of Peter Osgood situated outside the West Stand, I made my way around to the stadium tours and museum centre. I was around 15 minutes early for my 11am tour slot, but I was informed that as they had tours starting every ten minutes, then I could join an earlier one that was just departing. On being provided with a tour pass I made may way to the tours entrance where after having my ticket checked I was then invited to have my photo taken with a replica Premier League Champions Trophy. As the Club were charging an additional £10 for a photo and not being a Chelsea fan, then I declined. I did though enquire whether I could take my own photo, to which I was informed that use of my own camera was not allowed.

Around the corner was the meeting point for the tour. There was probably around 10 of us on the tour, including a bunch of Italians and some ‘exiled' Chelsea fans living in the Midlands. I have found over the years on going on stadium tours that the vast majority of people on the tour tend to be from overseas as such tours are seen as a tourist attraction. With the sheer number of overseas visitors to London then I can understand why the Club offer tours every ten minutes, it is simply financially lucrative for them to do so. On being met by the Chelsea Tour Guide, it was explained that the use of cameras was permitted on the tour, that members of the group shouldn't go wandering off during the tour and if we were to spot a Chelsea player, then not to mob them for an autograph/photo/selfie etc…. In such an event the Tour Guide would seek the permission from the player for photos. I am not sure whether this was just mentioned to raise some anticipation for the tour, or whether it does indeed sometimes happens, but on our tour there was no sign of any players around. 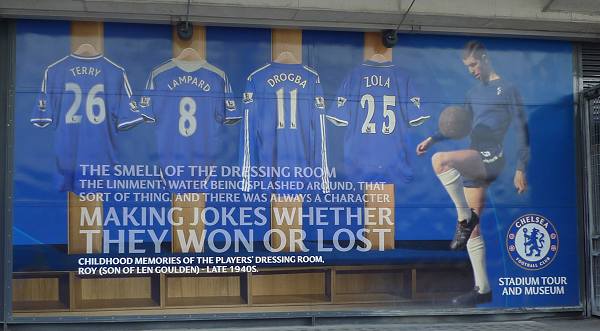 Having been led out of the Museum and Tour Centre we walked into the stadium and were invited to take a seat in the lower tier of the Matthew Harding Stand. Each individual on the tour was asked where they came from and which team they supported. Those like me (well only me on this tour) who admitted to supporting another English team were then ‘jokingly' advised by the Tour Guide to leave the tour. After these introductions we then left our seats to walk through the undercroft of the East Stand. before being briefly led back out of the stadium again to the entrance to the Press Conference Area. It was this point that we were held up for a few minutes as the preceding tour had yet to move on from the Press Area, much to the frustration of our Tour Guide.

We were eventually let into the Press Conference Area and here it was explained that this is where the Manager gives his post match interviews. The press area itself was quite basic and it wasn't particularly well lit. It was certainly not to the high standard of some others that I had seen at say Old Trafford and the Etihad Stadium. But then it dawned on me that we were in the oldest part of Stamford Bridge as the East Stand dates back to the 1970's, which partly explained the dated facility and why the Club wishes to build a new stadium.

Those on the tour were then invited up to sit in the Managers Chair to take their own photos. We were then also invited to pose in front of a Stamford Bridge virtual back drop to have another official photo taken, again at a cost of another £10, I again declined, although some others on the tour did so, but it seemed more to placate the insistence of the Tour Guide, which made me wonder whether they were being paid commission, on each photo sold. 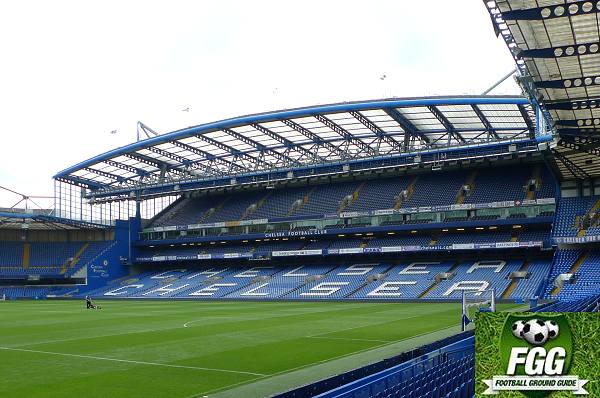 Next stop on the tour was the away teams' dressing room. But again there was another delay as the preceding tour party were still in there. So we stayed in the Press Area for a bit longer before finally being ushered quickly through. The away dressing room itself was as you would expect functional, but rather sterile. However for the tours the Club try to make it a bit more interesting, by displaying some original shirts of players, who have played at Stamford Bridge for opposing teams. Not only were there some shirts from modern stars such as Lionel Messi, but some from different eras such as Johan Cruyff, Bobby Moore and even Stanley Matthews. Knowing the price that these shirts now command in the collectors market, it did cross my mind whether they have ‘lost any' after a tour has gone through!

It was then onto the far more expansive and luxurious home dressing room. Personally I was little dismayed to see large player photos of themselves adorning each of their personal locker doors. I would have thought that for some of them their vanity did not need to be boosted any further, by admiring themselves again on matchday. Or may be I am becoming ignorant in my older age and don't really understand the needs of those young multi millionaire players….. The tour Guide explained that the players also sat together in the same places in ‘friendship groups' (oh how nice…). Whereas I do know of some other Clubs who have the players sit in squad number order, or others (and probably the best idea) who have players grouped together by position i.e. the goalkeepers, defenders, midfielders and attackers. 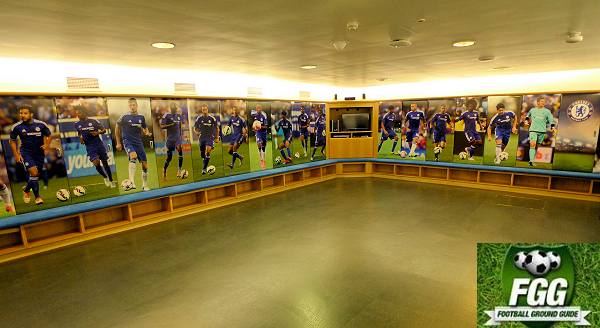 We then left the home dressing room and on down to the players tunnel, where we were led out through the tunnel and onto the side of the pitch. In common with most stadium tours, you were not allowed onto the pitch itself, but were able to sit in the team dugouts. In was then onto our last stop of the tour, which was a few minutes sitting in the upper tier of the Shed End, before being led out into the Club Shop, where you were able to view and purchase your official photos if you so chose.

I didn't precisely time the overall length of the tour, but it can't have been more than around 45 minutes (it might well have even ended quicker if we hadn't been held up by the preceding tour at a couple of points), which although I guess adequate, did seem a little brief to me. From the Club Shop it was a bit of a trek back around to the Museum and Tour Centre, but as my tour ticket included entrance to the museum I decided to do so. Situated a couple of floors up, the museum although not particularly large was well done and did feature some excellent models of the Stamford Bridge of old, the present stadium and the proposed new future stadium.

Model Depicting Stamford Bridge As It Used To Look 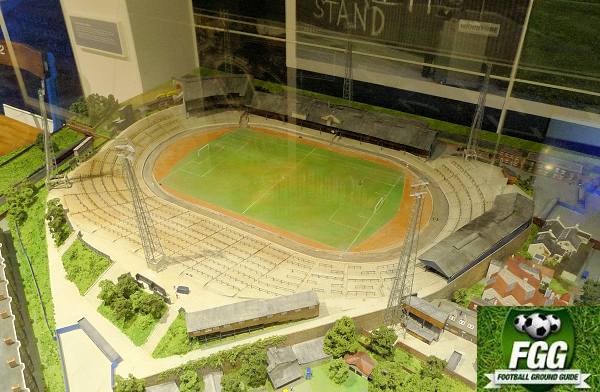 On the whole I found the tour an interesting one to go on and I am sure if you are a Chelsea fan you will find it even more so. However from a ‘neutrals' point of view, I felt the tour was a little rushed in places and a little on the short side. Plus I don't personally like being pushed to to pose and possibly buy extra photos. Also comparing it to other tours that I have been on, then I felt it was lacking in certain aspects. For example there was very little information given about the history of Stamford Bridge, or referral to some of the great games and events that went on there. The tour was also lacking in amusing stories or humourous moments that I have enjoyed on other tours. Also it would have been interesting to see parts of the newer West Stand, plus some of the Corporate Hospitality Areas, Boardroom, Players Lounge etc… At £19 for an adult ticket, then this might be good value for a Chelsea Fan, but it seemed a bit too much for a neutral. Still most things in London are over priced so I guess it was to be expected. On the whole though, I am glad that I did it.

Below is a video taken in 2013 of the tour, which gives you a further feel for it.