The Club have announced that they are to commence with the building of a new North Stand at one end of the Lamex Stadium. The existing terrace was fully used for the last time for the home match against Cheltenham Town on New Years Day. 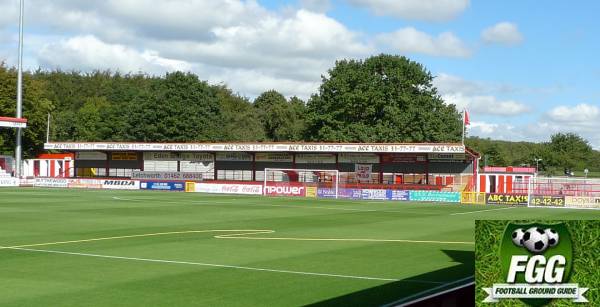 The new stand will be an all seated covered stand that will have a capacity of 1,500 seats. It is believed that the stand is costing around £1m and has been partly financed by the Football Foundation and the rest from supporters via an attractive bond scheme. As the North Terrace backs onto the main A602 Broadhall Way and is clearly visible to passing motorists, the new stand is set to be even more eye catching. It is believed that the Club will enhance this by installing a large LED advertising hoardings onto the roof or back of the new stand.

An artists impression on how the new stand will look

The stand should be ready for the start of the new 2018/19 season. When completed the overall capacity of the Lamex Stadium should increase to around 7,800.