Our Top Five Awaydays Do You Agree?

The beautiful game of football has become one of the most beloved sports for national and international fans alike. From watching live games to gathering this weekend’s football accumulator tips for the upcoming game, fans have become extremely proactive when it comes to the sport.

I am often asked, what is the best stadium to visit? Well if you are looking purely at the design and size of a ground then the new Tottenham Hotspur Stadium, is head and shoulders above any other stadium in the country. But does a superb stadium make for a great day out? Well not always. Similarly, the other question I am often asked is which ground has the best atmosphere? Again this is not as straightforward as it sounds. If you were going to a fairly meaningless game that ends with a 0-0, then you would probably find that the atmosphere, is not great. Go on another occasion when the same home team is playing its local rivals in a derby match, then the atmosphere is likely to be superb.

Instead, I tend to answer such questions by saying that it is the overall experience of the awayday visit to a ground that really counts. Yes, the ground needs to be decent, with reasonable facilities, and have some atmosphere. But other factors are also important too; Will you get a friendly welcome as an away fan from both the club and the local home support?  (or at least if not particularly friendly, that you get no bother from the home fans or stewards). Can you buy half-decent food and drink fairly easily at the ground? Is the ground easy to get to and from? Are there plenty (or at least some) decent pubs that away fans can visit?  Is the stadium located out of town with little around or is it fairly central to the town or city, with all those facilities available? Is the town or city a fairly pleasant place to wander around?

So you can see there are many factors which determine a great away day out, but even then if your team are rubbish on the pitch and get stuffed 3 or 4 nil, then you may still rate it as a poor awayday, but that is football (as was often said following my team Birmingham City away;  ‘A great day out, spoilt by the 90 minutes of football!’).

So here I share with you what I consider to be the top 5 awaydays of the current 91 Premier and Football League Clubs in England and Wales and ones that I would quite happily return to. They are not in any particular order, but I hope that gives you some pointers for a future awayday or ground visit for you in the future. 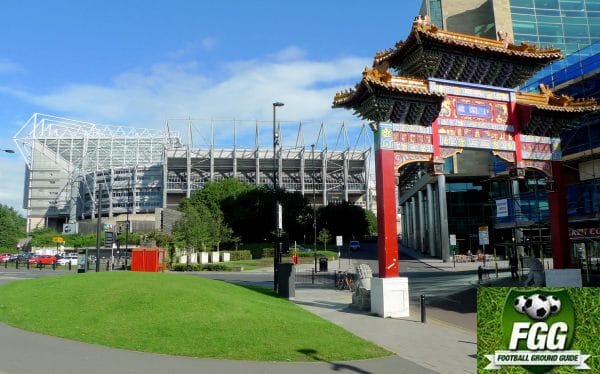 Newcastle United is not so much a football club, but an institution, almost a religion in this football-mad city. St James’ Park is an imposing sight on the Newcastle skyline  and its sheer size makes it an awesome sight. It is unusual nowadays for football grounds to be located close to the city centre, especially one of this size, but St James’ Park is literally 10 minutes walk from the main central shopping area, meaning that it is not only handy for the train and metro stations but there is also a wide choice of eating and drinking places to choose from. Newcastle is a great place to spend a weekend, with a great nightlife. Usually, there is not any bother from the home support who are normally more than happy to talk football. The atmosphere within the stadium can be good too, although the high elevated location of the away section, not only means that you are sat quite far away from the playing action, but that you have to contend with 14 flights of steps to reach it! Most fans always enjoy a trip to London, with all its attractions. And even the higher prices for food and drink mostly charged in the capital don’t seem to dampen fan’s enjoyment. Craven Cottage enjoys a lovely spot on the edge of Bishop’s Park and on the bank of the River Thames (some fans even take a boat along the Thames to the ground!). Craven Cottage itself has a great mix of the old and new, giving it character with the Johnny Haynes Stand dating back to 1905 and the unusual Pavilion type cottage in one corner.

Before this season the ground had a unique ‘Neutrals Section’ in the Putney End, where it was not uncommon to see ‘neutral’ away and ‘neutral’ home fans sitting together, something that just wouldn’t work in other stadiums (incidentally the neutral section was only suspended whilst building of the new Riverside Stand was taking place, but will probably be reinstated once complete). This is a testament to how relaxed the Club and Fulham fans are, although unfortunately, the Metropolitan Police seems to have a different view and in my opinion, seem to have a disproportionate amount of officers present on matchdays. But normally there are no problems and there is normally a good atmosphere in the away section at least. The Pirelli Stadium may be a surprising choice to some, with a ground that has a capacity of less than 7,000 and one which some described as having a ‘non-league’ feel. However for those who are more accustomed to watching their football in the Premier or Championship Leagues, then the ability to watch the game from the away end standing on the terrace, is a welcome change and reminiscent of days gone by when you could this at any ground. The Pirelli also has decent facilities and even a little indoor bar exclusively for visiting supporters. The low roof over the away end means that quite a good atmosphere can be generated.

Although on the edge of town it is still walkable from the train station (around 20 minutes) and there are a few pubs in the area. The other big bonus of visiting Burton is that if you are a real ale fan like me, then with Burton being the ‘brewing capital’ of the UK, then there a plethora of good pubs serving real ales to choose from. So much so that it is normally after enjoying their hospitality it can be a bit of a challenge to then get to the ground for kick-off! If you have watched the documentary ‘Sunderland Til I Die’ then you will more than familiar with what the Club means to the city. Although the club has tumbled down from the Premier League to League One in recent seasons, it is still a great place to visit. It is a great good-sized stadium, that is reasonably close to the city centre, and is relatively easy to and from by car or public transport. But its greatest asset is its fans. Normally a warm welcome awaits the visitor, in both the pubs and area. One time after a match I was even given a Sunderland shirt by a fan in a pub to wear home! My only grumble would be the location of the away fans, which is high up in one corner (it was better when visiting fans were located behind one goal) but still a great experience. Normally I am not a fan of modern bowl –like stadiums and to be honest Pride Park in terms of design, doesn’t exactly excite me. It is functional and the facilities are okay. However, there is normally a good atmosphere and I have never had any hassle inside or around the ground. Plus although it is located on an industrial estate, it is handy for Derby Railway Station and not that far from the city centre. Derby also has a number of excellent real pubs, so again a ‘real ale destination’ for the discerning drinker!

FootballGroundGuide » News » Our Top Five Awaydays Do You Agree?