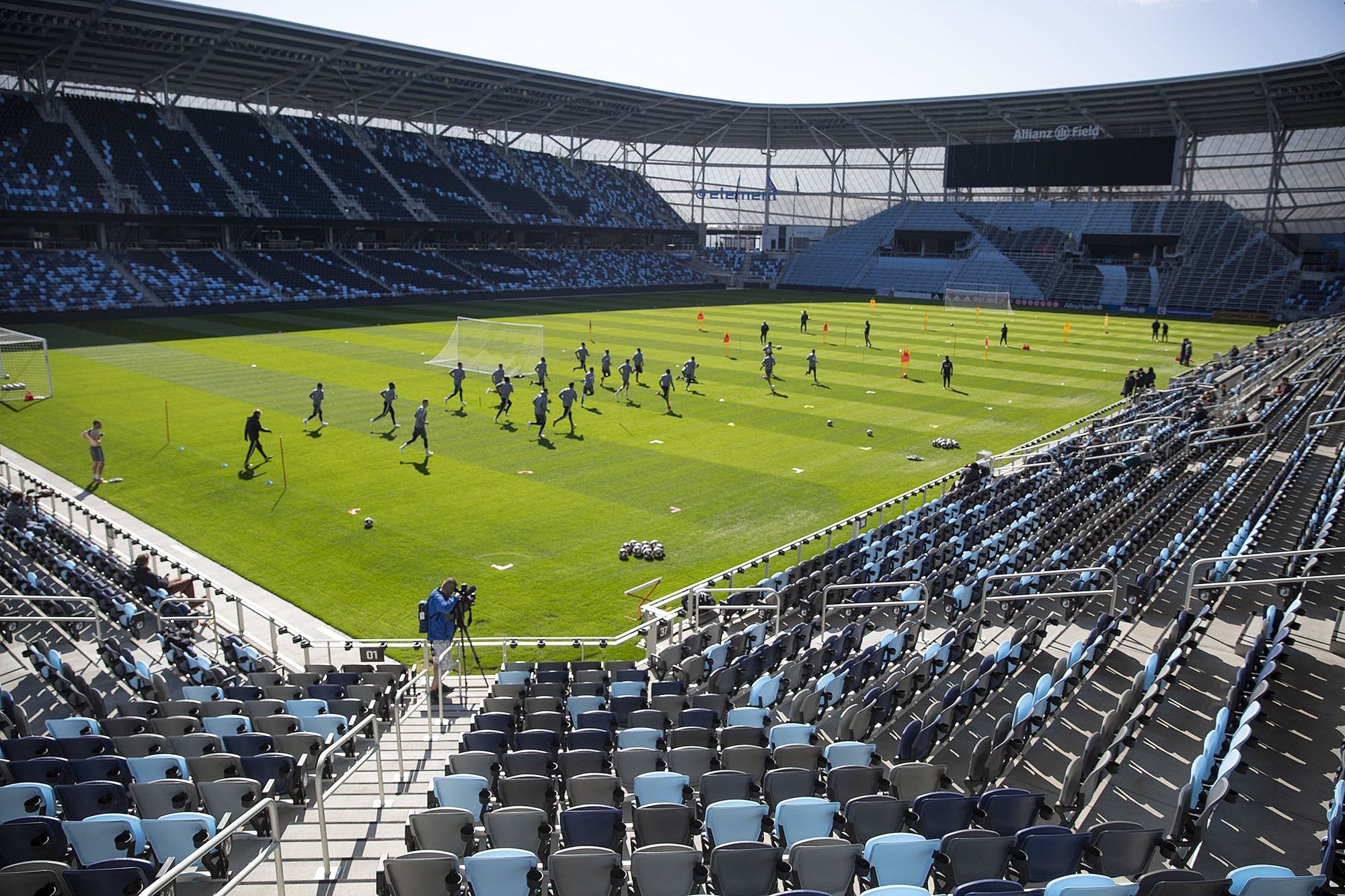 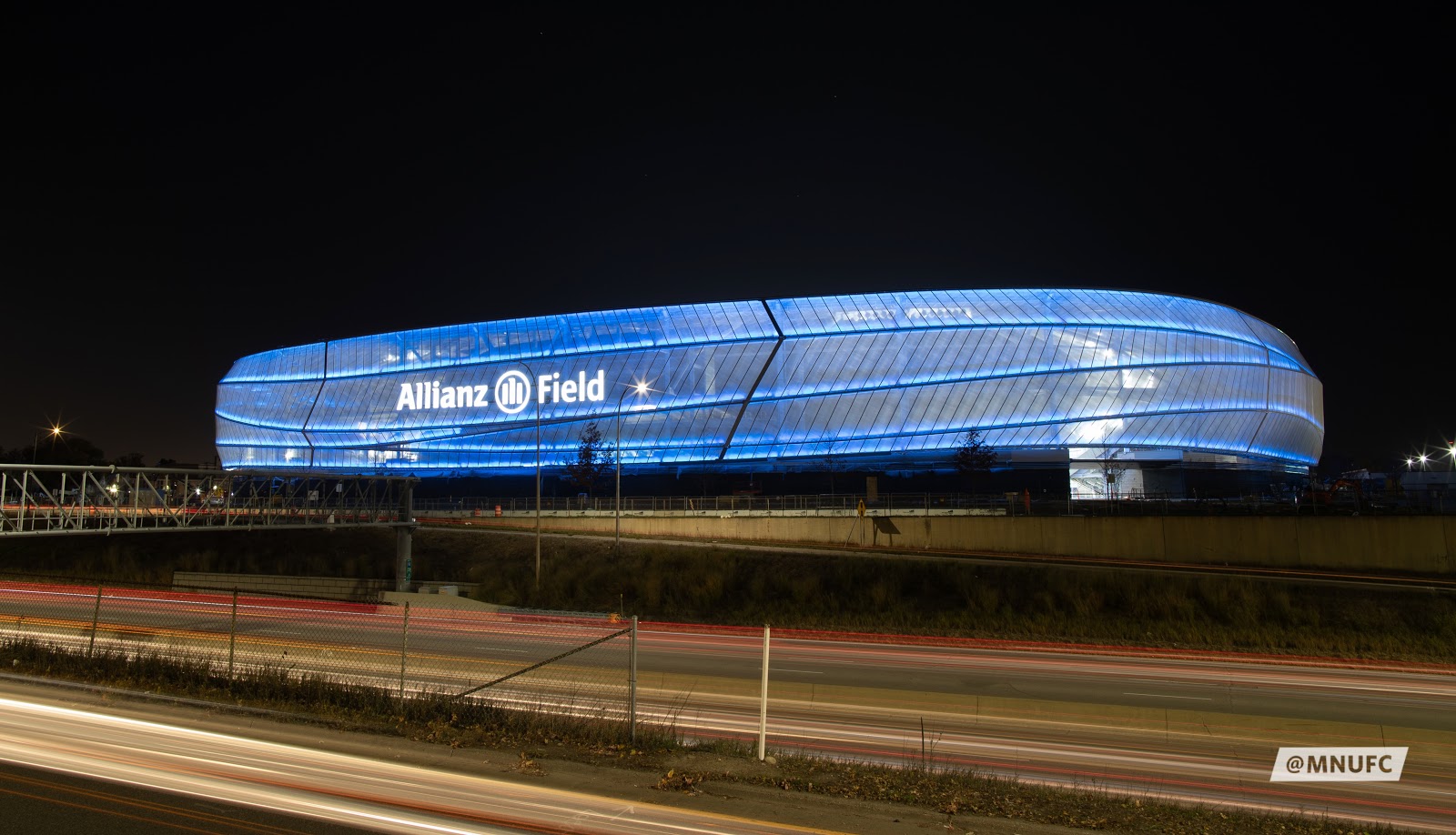 The Interior
Is it insulting to call Allianz Field a wannabe of Bayern Munich’s Allianz Arena? We don’t think so and there are a few similarities between the two. Although, the home of Minnesota United is somewhat smaller!

Inside the stadium, you’ll find four stands with all of them quite different. The South Stand is a dedicated standing space, which holds 2,920 fans who will be spread over a number of sharply inclined rows to ensure they’re almost looming over the goal that is situated at that end. Behind them, there is an elongated flatscreen that shows game replays and acts as the scoreboard and match clock. To the east of the ‘supporters section’, as it is known, is a shallow set of corner seating, which is replicated in each corner, followed by a two-tiered stand that runs the length of the touchline. The first rows of the top section overhangs the back rows of the lower tier. The next stand is that situated in the north. This is a single tier stand, again on a pretty sharp incline, with the desirable ‘Brew Hall’ located above the final rows of seating. Finally, you come to the West Stand. This stand is broken into three different tiers with the vast majority of seating dedicated to media, directors and a range of different suites.

The most sought after stands are located in theWest Stand. You have Field Club, Loge Boxes, the Upper 90 Club and Stadium Club. The Field Club is the closest to the pitch at under 20ft away but the Loge Boxes, for example, offer VIP treats and table service. If you end up seated somewhere else in the 19,400 capacity stadium, you shouldn’t worry too much with plenty of refreshment options available along with no restricted views.

The exterior
We’ve just given you a detailed run through of the inside of Allianz Field but before you step foot in the ground, the first thing you’ll likely notice about the stadium, which was only opened in 2019 after two years of works, is its eye-catching exterior – particularly if you see it at night. The ring-shaped stadia boasts a 360-degree roof canopy but it’s actually the transparent ‘wrapping’ that catches the eye; this covers approximately 88,000 sq ft and comes complete with near on 2,000 LED lights attached. The logic behind these design features are two-fold. First, during daytime matches, there is plenty of outside light allowed in, then, at night, you have the emotive LED lights adding to the atmosphere and giving the stadium a general ‘pop’ to visitors.

When it comes to finding a place to relax before the match, Allianz Field packs a punch. We’ll start from the previously touched on Brew Hall at the north end of the stadium itself; here you can get a variety of food and drinks whilst overlooking the pitch or checking out pre-match information and previous footage on the provided screens.

On the outside, there are various spots for you to fuel up. University Avenue West is littered with bars and restaurants. For instance, Ghebre’s Ethiopian restaurant, which is located just a five minute walk away is very highly rated. It’s far from your only option though with burger joint Culver’s also nearby along with plenty of other cuisine offerings ranging from BBQ, Thai and Chinese through to more eat-and-go places like Taco Bell and McDonald’s. They are all available within a stone’s throw of the stadium. There are a few choices for having a drink too; the Midway Saloon is under five minutes from the stadium whilst the Black Hart of St Paul isn’t much further. If a brewery style is more your thing then on Thomas Avenue – around 1 mile away – you’ve got the Burning Brothers Brewery.

If you’re looking for something totally different then slightly further afield – at 1.5 miles – is Can Can Wonderland on Prior Avenue. Here you can not only grab a beverage and bite to eat but you can even play a few rounds of mini-golf or pass time on retro arcade machines. One for those with kids perhaps!.

The away day experience at Allianz Field is something Minnesota are keen to promote. They want opposition fans in their ground to help generate an atmosphere and have a procedure in place where visiting supporters can have prohibited items – such as large banners – approved for entranceprior to game day.

Location wise, away fans are sat in the North East corner. This is the opposite end of the field from the standing section that is known to be the area dedicated to the more vocal home support. The good news is it puts the away crowd closer to the bars and restaurants on University Avenue whilst the Minnesota Beer Hall is also nearby. They’ve got dedicated concessions on the concourse inside their section of the stadium too.

How Do You Get to Allianz Field?

Transportation to and from Allianz Field is relatively hassle-free. Firstly, you’ve got the fact the club have teamed up with the City of Saint Paul to provide sustainable and safe bus transportation for fans including free shuttles.If public transport isn’t your thing then you’ll be pleased to hear that there are plenty of parking options nearby. Spruce Tree Lot – otherwise known as E Park – is probably closest with it’s location on University Avenue West just a five minute walk to Allianz Field.

You still have other choices though; Griggs Midway in roughly a mile to the north of the stadium on Fairview Avenue whilst you can also find parking near the University on Concordia Avenue, which is about a 15 minute walk away and, even then, there are plenty of others if you want to search out a different place to park. The one warning flag with respect of driving to Allianz Field is that dedicated parking at the stadium is not guaranteed. There is always an influx of cars on game day.

Some people might not fancy the ‘in and out’ style trip as detailed in the above steps. If that sounds like you then your best option for a one night stay is the Best Western Plus at Como Park, which is a three star hotel. It is 1.8 miles from Allianz Field and is walkable in circa 40 minutes. You can either follow Hamline Avenue all the way down towards the stadium or you can brighten your stroll with a cut through at Horton Park before picking up Pascal Street. Expect to pay around $150 per night.

There are other similar standard hotels in the area but all are further away and of comparable specification and price.

Be the first to leave a review of Minnesota United FC!