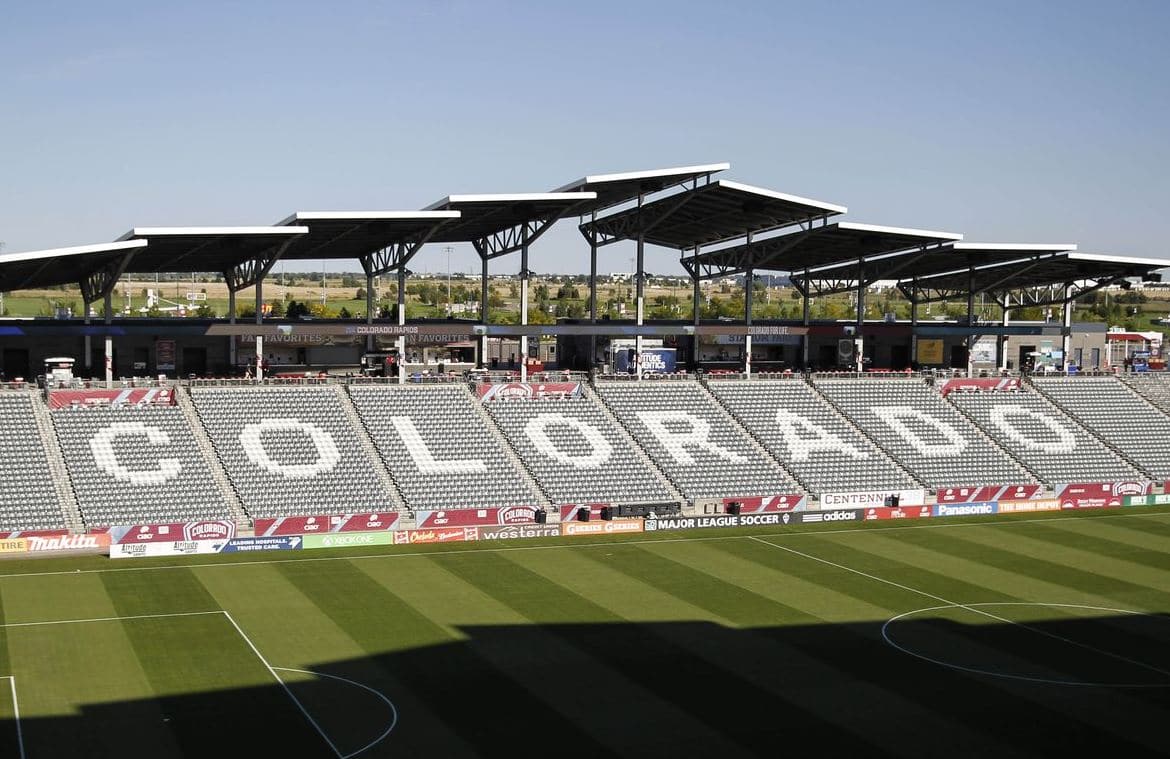 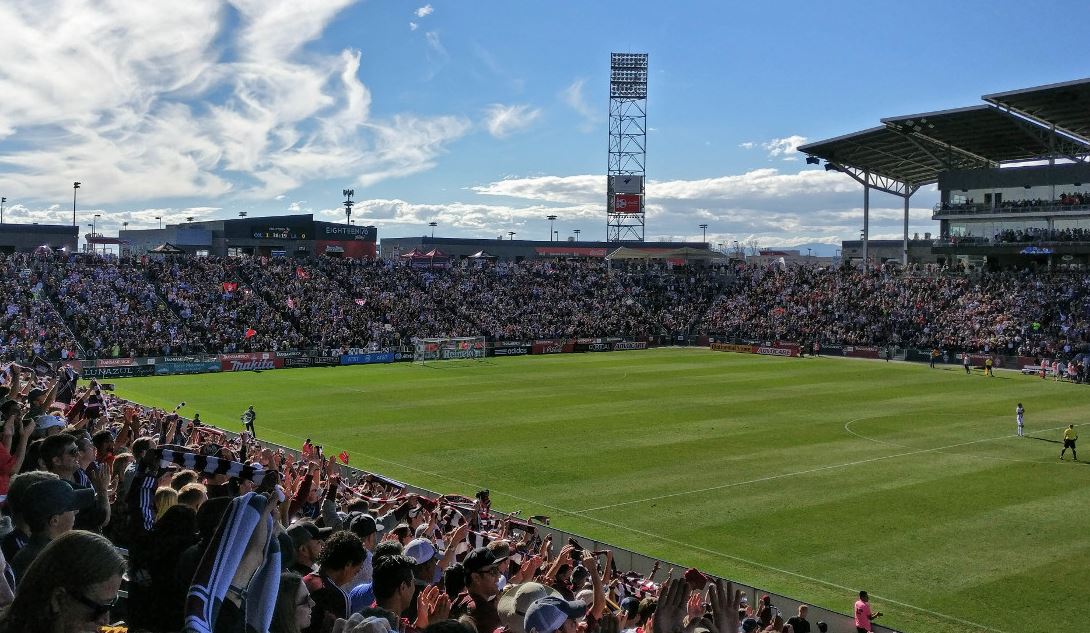 Unlike many stadiums in the MLS there are very few defining features on the outside of Dick’s Sporting Goods Park. For most people, the route into the stadium will take you through plenty of greenery before you find the stadium roof appears in your line of vision across the flattened area of fields and car parks. Soon after, you’llarrive at the most desirable element of the ground – the Eighteen76 bar.

When it comes to the inside of the stadium, again, things arepretty basic as football grounds go. The first thing that you’ll notice is probably the large screen situated at the top of the north stand. Also at this end of the stadium, you’ll find the supporters section, which is a standing only terrace. Either side of that are wide open corners and old school style floodlights. Working round to east stand we come to one of two roofs present over the stadium. It’s not your bog-standard roof though with metal support beams holding up nine overlapping panels positioned at staggered heights, which creates an easy on the eye, layered view. With respect of the seating, you’ve got a single tier set over a fairly steep incline. Unlike with the north stand, the side stands connect directly to the south courtesy of small corner stands.

The south stand, like the north, is absent of a roof and offers a no thrills experience with one-tier of seating. Again, the seats are set on a sharp incline; this is done to keep fans closer to the action. The other aspect of Dick’s Sporting Good Park you’ll see in the south stand is the Eighteen76 building, which rears its head over the back row of seats. This is simply a bar-come-restaurant for pre and post game use. Finally, you have the west stand. Like the others before it, there is just the one tier of seating along with a roof that mirrors that of the east stand. There is, however, one notable difference; that’s the presence of a range of VIP suites that site between the back row and the roof.

When it comes to getting your pre-match food and drink fill, unfortunately, Dick’s Sporting Goods Park isn’t the best served location in the MLS. For starters, the concessions on offer at the stadium are hardly leading the way with just 10 permanent fixtures in place; although the Eighteen76 bar behind the south stand has a decent reputation. There are also a few further options available who operate as mobile concessions but it’s worth noting you’ll need cash to purchase anything from most of those without a permanent space in the stadium.

If you explore outside of the ground then you do have a few options within walking distance. A 10 minute walk down East 60th Avenue will bring you to Quebec Street and from that junction you can see two places – one a sports bar by the name of Halftime Sports Bar and a Mexican restaurant, Las Dos Americas Tortilleria. If you’re happy to stretch to a 20 minute stroll – a distance of around one mile – then you unlock a few further options; the Hideaway Saloon is a bar on Olive Street whilst Church’s Chicken is impossible to miss if you simply follow Prairie Parkway to its junction with, once again, Quebec Street.

If that doesn’t take your fancy then a 20 minute walk in the other direction, which would see you pick up Central Park Boulevard, will take you down to a Chinese restaurant named Panda Express and the more well-known brand of Taco Bell.

What Is Dick's Sporting Goods Park Like for Away Fans?

Away supporters are located in sections 100 and 101, which puts them in the furthest north blocks of the east stand. The views of the field from this position are unrestricted and whilst there is the open corner next to them, their nearest home fans are those in the Supporters Section i.e. the standing fans. This lends itself to creating a great atmosphere despite the relatively small capacity.

How Do You Get to Dick's Sporting Goods Park?

Most people tend to drive into Dick’s Sporting Goods Park with excellent parking options and a strong road network around the venue aiding that process. For starters, you’ve got the roads that lead in; if you’re coming from the south you have a fairly major road in East 56th Avenue and to the north you have Highway 2 – both of these connect to Quebec Street, which leads you to the abundance of parking choices.

In addition to offering multiple car parks to choose from, when you buy a ticket for a match involving the Colorado Rapids include a free parking space; this means you don’t have to worry about using an app or feeding change to a machine on arrival. If you do park in one of the many lots directly associated to the arena, a walk to the ground should take no longer than 10 minutes. It can be as short as 15 seconds if you nab one of those spaces that is just a matter of feet away.

If driving isn’t an option you can take then you could turn to the bus. Route 88 brings you pretty close to the stadium but you should be prepared for a 20 to 25 minute walk with the stop being positioned where Quebec Street meets 56th street.

If you want to spend the night somewhere close to the stadium then there is good and bad news. Firstly the bad news; there aren’t hotels on the doorstep of Dick’s Sporting Goods Park with the nearest 1.5miles and a 30 minute walk away. The good news is that the 3-star Staybridge Suites are pretty respectable and at $220 per night it won’t be crippling to stay here.

If you’re looking for more than a 3-star gig then you’ll be looking at the Renaissance Denver Central Park Hotel. This is a 50 minute bus ride away including a switch between routes too; that’s hardly ideal but somewhat surprisingly, you should be able to bag a room for $30 less than the lesser ranked Staybridge.

Be the first to leave a review of Colorado Rapids!