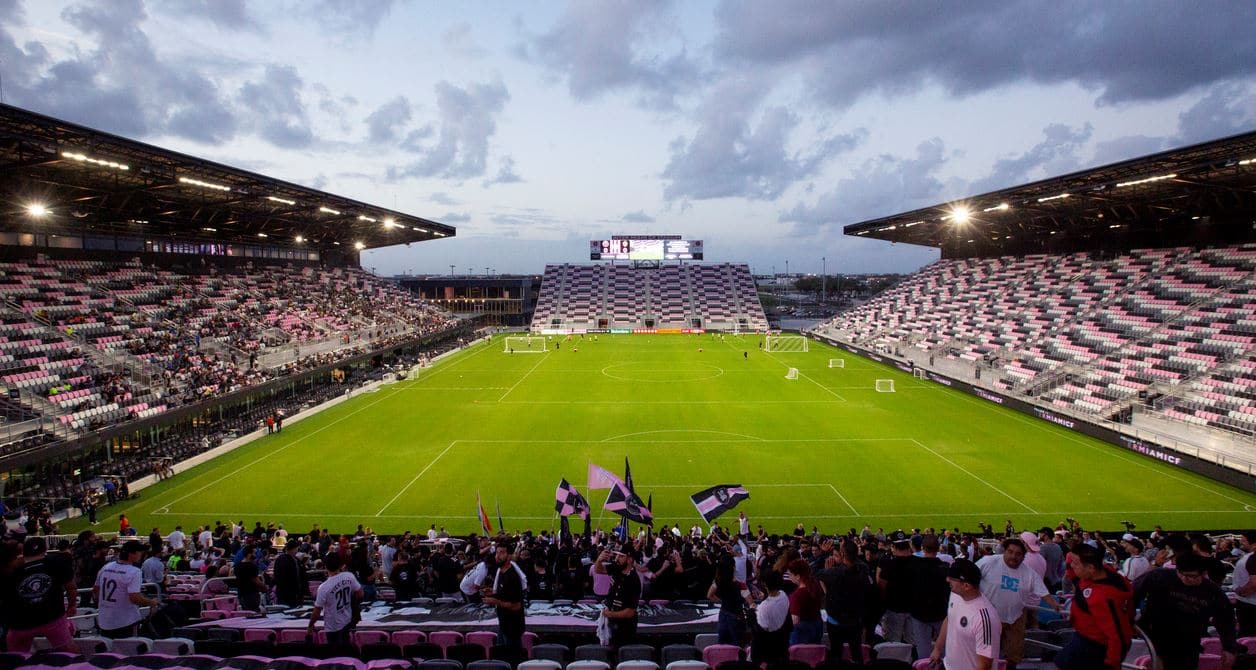 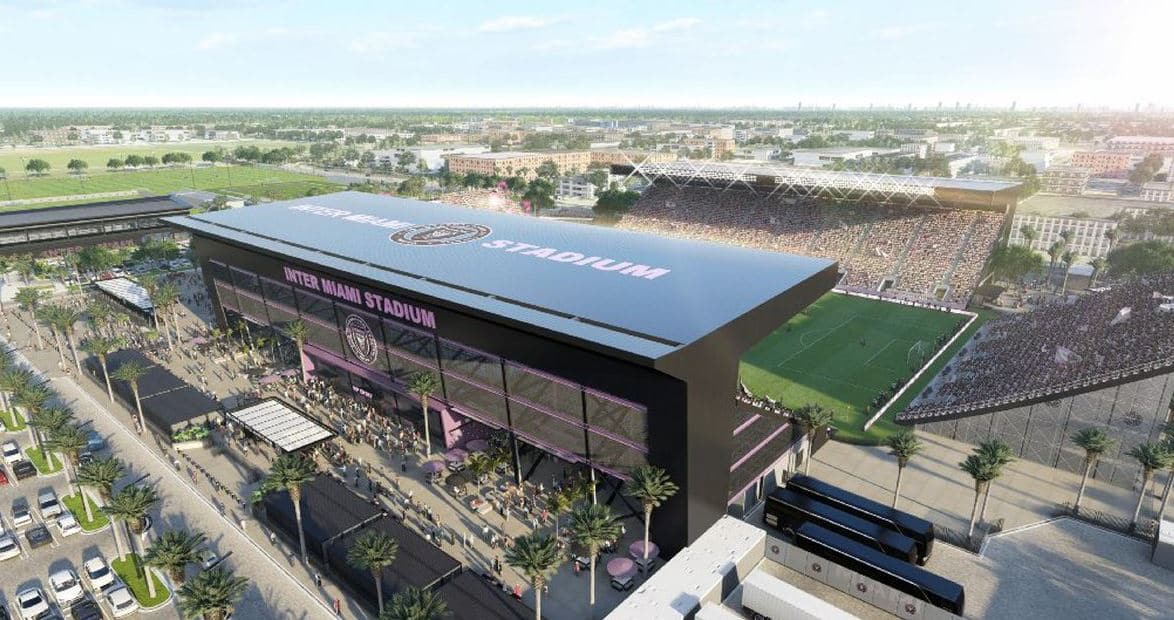 The Exterior
The main thing to note about the outside of the Inter Miami CF Stadium is the general surroundings it sits in; a year or two ago it was largely industrial. That is not so much the case now though, you’ve got palm tree lined roads and car parks complemented by large areas of greenery including a well kept practice pitch. Then you’ve got the stadium itself, which is constructed of four separate stands meaning you’ve got four wide open corners. You might think that sounds odd but, strangely. it works, and the sleek black design and sharp finish to each stand looks quite impressive. The finishing touch to the exterior is the club shop that is located towards the south west corner.

The Interior
Where the inside of the stadium is concerned you are met with four stands all offering one tier of seating. All of the rows of seats are positioned tightly to the pitch with a sharp incline up towards the back row. There are, however, some notable differences between the behind the goal stands and those that flank the touchlines. The east and west stands have black roofing jutting out over the seats with bright lights on the front of those that make the stadium standout of the dark night for evening games but the north and south stands, which are behind the goals, are open topped. They do, however, both have large video screens behind them supported by a series of stilts.

Finally, the only other thing to note is in regards to the VIP suites. In the west stand you have a VIP section that offers views over from the halfway line whilst the north stand boasts a suite with Heineken Bar.

It’s probably fair to say that Inter Miami’s new stadium will be more geared to meeting the food and drink requirements of fans than the temporary home that isInter Miami CF Stadium. That said, fans do still have a few different options. For starters, we’ve already touched onthe Heineken Bar located in the north stand, which is the main attraction at the stadium. There are plenty of other concessions dotted around the ground though with a total of 10 in addition to the VIP areas; the best served stand is the east stand, which offers four.

Of course, you’re not forced to get your pre-game fill inside the ground although the immediate vicinity outside the stadium isn’t the best served area in Miami. A 15 minute walk north of the stadium up North West 10th Terrace will bring you to a trio of well-known brands – McDonald’s, Arby’s and Wendy’s – whilst an extra five minutes on Cypress Creek Road will bring you to Starbucks and Phat Boyz BBQ restaurant.

If you decide to head south then you’re looking at a similar distance to stroll with similar options. Meat & Fish on 49th Street is another highly rated barbeque restaurant. If, however, you head to the cross roads of Powerline Road and Commercial Boulevard you’ll be in a stone’s throwing distance of another McDonald’s, KFC, Waffle House and Dunkin’ along with lesser known restaurant’s like Major League Heros sandwich shop and the Crisp Eatery and Bar.

If you’re someone that purely likes a pre-match beverage then it’s the stadium for you with next to no out and out bar options close to the ground.

What Is the Inter Miami CF Stadium Like for Away Fans?

Unfortunately, there isn’t much known about the setup for visiting fans because they’re yet to set foot in the stadium due to restrictions on crowds causing the Inter Miami record capacity to sit at 2,400. What we can confirm is that opposition supporters will have access to food and drink concessions along with a decent view of the game.

How Do You Get to is the Inter Miami CF Stadium?

For ease of access to the stadium, public transport provides a good option. You have the choice of jumping on either the Tri-Rail or bus. The nearest train station exit – Cypress Creek Station – is hardly on the doorstep of the stadium at 1.3 miles but it is a walkable distance if you allow yourself enough time. With respect of the bus route, you have two main choices. Route 14 will drop you on 9th Avenue with stops just 0.3 miles away whilst route 55, which runs along Commercial Boulevard will stop 0.2 miles to the south of the arena.

If you opt for driving then your best bet is one of the car parks that wrap around the east and south stands. Failing that, you’ll be looking to park away from the stadium and walking in.

It’s more than feasible that some fans – particularly tourists or away supporters – will want to spend a night near the ground to take the stress out of their visit to the Inter Miami CF Stadium. There are a few budget friendly options nearby; the Holiday Inn Express on Commercial Boulevard and Fort Lauderdale Grand Hotel located on Powerline Road are both 3-star venues located at a distance of 0.4 miles. The Holiday Inn does come in more expensive at $140 per night compared to $60, however, reviews from Booking.com do suggest it’s worth the extra money.

If a 3-star stay doesn’t cut it for you then there are 4-star options at a distance of circa 2miles in the shape of the Marriott North on North Andrews Avenue might fit the bill. It will set you back $225 per night.

Be the first to leave a review of Inter Miami CF!