The Top Ten most expensive stadiums in history

It’s no great secret that there is some serious money involved with professional football these days, and this also extends to the stadiums that host professional games all around the world. Here, we’ve covered the 10 most expensive stadiums ever built – and some of the figures are just astounding!

If you are reading this from the UK, this stadium needs no real introduction. Wembley Stadium is not just one of the most expensive stadiums in the UK, it’s one of the most expensive in the whole of Europe. Costing over £1 billion when it was built in 2007, Wembley is an absolute mammoth stadium – with a capacity of 90,000. Needless to say, Wembley hosts some of the most major events in football, including games that involve the England national squad.

Having opened only in 2019, the Tottenham Hotspur Stadium is one of the newer additions to this list. And it’s not only one of the more modern stadiums, but it’s also definitely one of the most expensive. When the whole construction project was finished, the final estimate came in at approximately £1 billion. Then again, the stadium is hugely impressive, with a completely interchangeable pitch to accommodate American Football games as well as Tottenham’s football games. For our fourth ground in the list of most expensive stadiums currently in existence, we are heading over to South America – in Brazil. Estádio Nacional sits in the heart of Brasília, Brazil’s capital, and it is the second-biggest stadium in the whole of Brazil. Of course, such a feat wasn’t achieved without substantial financial backing, and the final costs of construction here came in at approximately £600 million. This was back in 1974, and the stadium has since been renovated for some major upgrades. Believe it or not, the Santiago Bernabeu wasn’t the most expensive stadium in the world by a long stretch when it was initially built. However, the size certainly was one of the most impressive aspects of the stadium, but the sheer size is not a shadow on the more recent changes surrounding the club. Recently, Santiago Bernabeu is due a makeover that is rumoured to cost investors more than £500 million. This won’t actually change the capacity, apparently, but instead, the focus will be on raising the height of the stadium and adding a roof. While the initial cost of this statement wouldn’t specifically land it on our list of the most expensive stadiums, the unplanned costs that were passed onto the state were enough to push the Allianz Arena into this category. Adjusted for inflation, the costs for the build and the necessary changes to the surrounding area surpassed £500 million, but then again, a stadium that will host a team like FC Bayern Munich needs this kind of cash boost. At full capacity, this arena can host over 75,000 fans too! Despite football being much more popular in places like Europe, American is still a place where large investments are made into these kinds of structures. And as it happens, the Mercedes-Benz Stadium is one of the most expensive stadiums ever built, but football isn’t actually the main sport played here. As you may have guessed, the main sport played at ‘The Benz’ as it is referred to is American Football, with Atlanta United being a bit of an add on. Although accurate public figures have never actually been released, the stadium is rumoured to have cost well over £1 billion. To answer the question that everybody thinks when they see the name ‘Yankee Stadium’, yes, this stadium does actually host football games, as well as baseball games. While the New York Yankees are obviously the most famous team that play here, New York FC also plays here, which puts Yankee Stadium in the category of a football stadium. And speaking of large investments, the total cost of this one was in excess of £1.5 billion, which is just an incredible amount of money to plough into an arena. This cost and expansion came at great public expense too, as many citizens weren’t happy about the surrounding parks being swallowed up by the new build. 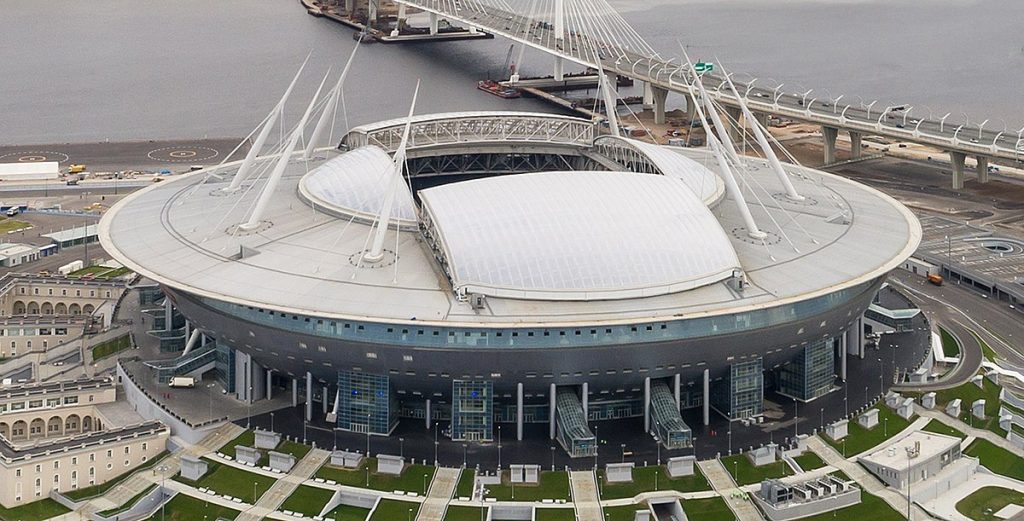 Over in Russia, we have another stadium where the total cost rose above £500 million. But just like some of the other most expensive stadiums highlighted here, this one was built with a specific purpose – to host the 2018 World Cup games. Many people refer to this stadium as a spaceship design, for the slightly different aesthetics seen compared to other larger football stadiums around the world. And since almost 65,000 spectators can squeeze into the grounds here at full capacity, the roar during a big game is seriously impressive. Finally, the Singapore National Stadium is another one that enters the £1 billion-plus club as far as its construction costs go. Having opened back in 2014, this arena has gained a reputation as one of the most technologically advanced stadiums on the planet. The stadium is actually fully dynamic since the seats can be moved around and adjusted based on the event and the expected spectator figures. To add to this, the roof is fully retractable, and the dome exterior even has moving parts – does it get more futuristic than that?