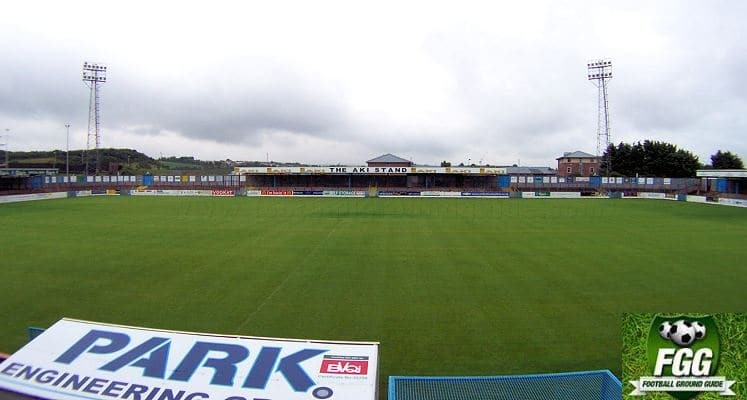 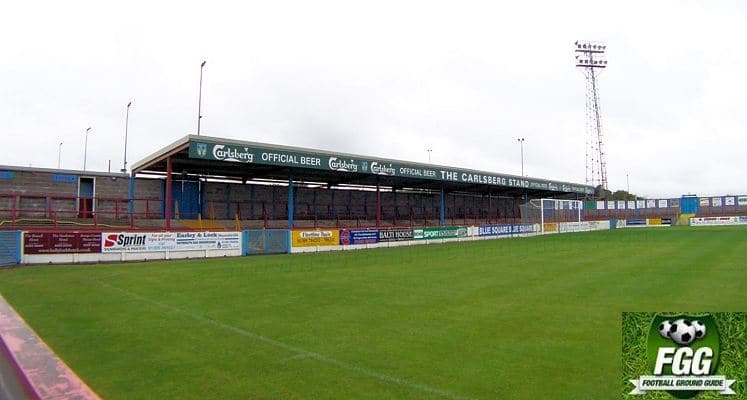 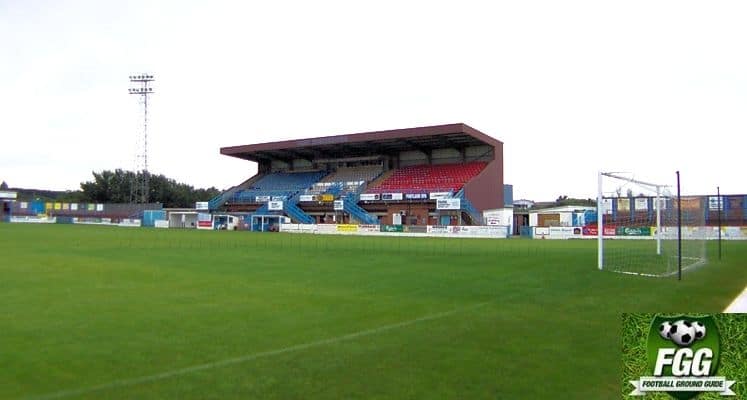 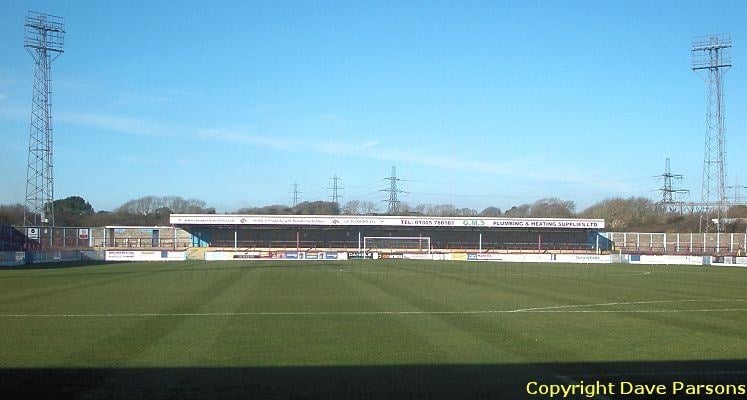 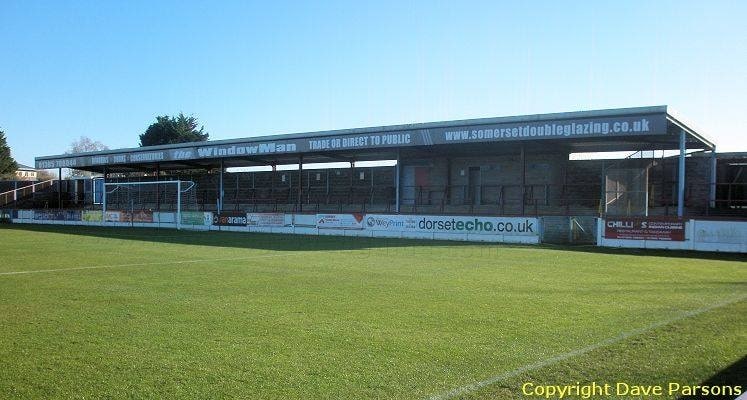 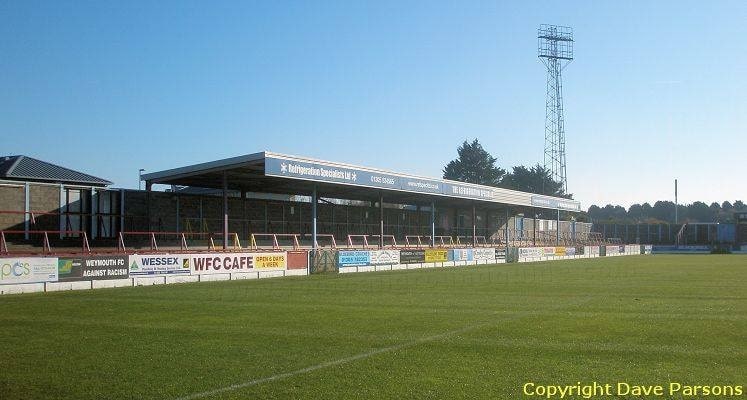 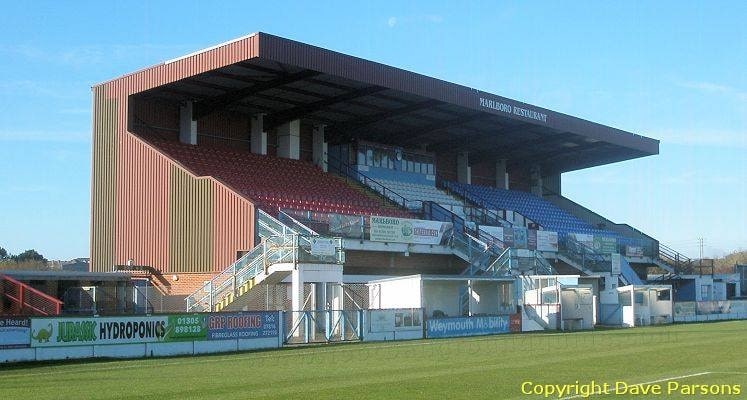 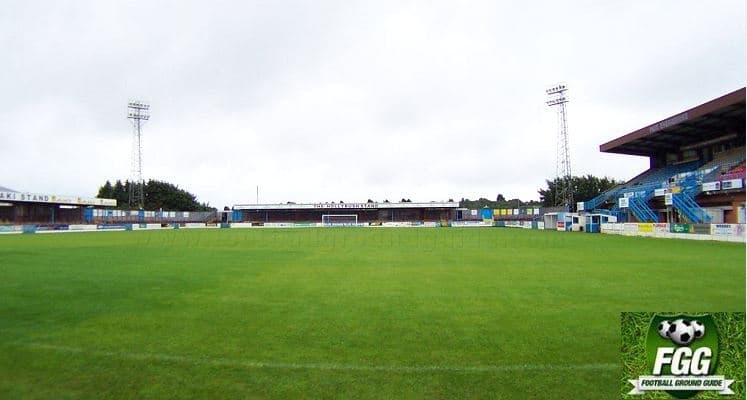 A well maintained tidy stadium that that has the traditional football ground feel. There is cover on all four sides of the stadium. On the west side is the Main Grandstand, which is a covered seated stand that runs for around half the length of the pitch and sits astride the halfway line. The seating area of the stand is raised well above the level of the pitch, meaning that you need to climb a small staircase to access it. In front of this stand are the team dugouts. Both ends are similar-sized covered terraces, whilst on the remaining side of the ground, there is a covered terrace, that runs for around half the length of the pitch. This area is called the Southill Terrace and is affectionately nicknamed the Babs Windsor stand by the Weymouth fans (you’ll have to ask one to find out why!). The rest of the ground mostly comprises of portions of open terrace, to either side of the stands and in the corners, making the ground a good size in terms of capacity. The ground has a set of four tall great looking traditional floodlights.

Weymouth moved to what was then called the Wessex Stadium in 1987, after leaving their old Recreation Ground, which had been their home for 99 years. The council-owned Recreation Ground was sold to Asda and the new stadium was built on the site of the old Weymouth Speedway and Greyhound track. The Wessex Stadium it was renamed in 2010 the Bob Lucas Stadium after a former club player, physio and President.

When segregation is in force, then away fans are mostly housed in the South Terrace at the car park/car wash end of the ground, using turnstiles 9 and 10. This end is a covered terrace, with some open terrace to one side. Although covered it does have a number of supporting pillars running across it. Visiting supporters are also given a number of seats in the Main Stand, where there is an unobstructed view of the playing action. There is no additional charge for seating. Normally there is a reasonable atmosphere generated within the stadium.

There are a couple of bars at the ground itself. However, if fans are segregated then they are only available to home fans. Otherwise, there is not much around the ground itself as it is located out of town. The nearest pub is the ‘John Gregory’ which is half a mile away (turn left out of the car park, take the first right-hand turn and then the fourth exit at the Wessex Roundabout). This pub also serves food and there is plenty of parking available in the adjacent shopping centre.

Otherwise, it is a case of journeying into Weymouth itself where there are plenty of pubs to be found including two Wetherspoons outlets, called the William Henry of Frederick Place and ‘The Swan’ on St Thomas Street. There are several pubs around the harbourside including the Globe, Royal Oak, Rendezvous and they have the advantage of two taxi ranks outside or near The Swan.

From Dorchester take the A354 towards Weymouth. On entering Weymouth you will reach the Veasta Roundabout. Take the second exit still on the A354, signposted to Portland/Town Centre. At the next roundabout passing a Morrisons Store on your left take the second exit continuing towards Portland/Town Centre and follow the brown signs for the Wessex Stadium. At the next roundabout take the third exit onto the B3157 Granby Way. After a little while you will be able to see the stadium floodlights in front of you. At the next roundabout take the third exit (signposted Dorset Police HQ) and then immediately left for the car park entrance. There is a cost of £2 per car to park there. However spaces are limited so make sure you arrive early. Plus after the game, there is normally some congestion leaving the car park as there is only one exit.

Dave Parsons informs me; You can catch the No.3 First Bus towards Hereford Road. This route has a 15 minute frequency on Saturdays but doesn’t run in the evening. Ask to get off at Radipole Lane which is a 6/7 minute stroll along Radipole Lane to the Wessex Stadium. This bus can be caught from by the King Street Roundabout, which is just a few minutes walk from the Railway Station. Head out of the station and turn right down King Street. Cross over and turn left at the roundabout. The Bus Stop is located next to the roundabout in front of the Bus Garage. The bus goes via the Town Centre and also picks up at Commercial Road (behind Debenhams) and Town Bridge at the harbour end of St Thomas Street.

Concessions apply to Over 65’s, Students, Registered Disabled (Carers are free) and the Unemployed.

Weymouth Hotels - Find and Book Yours And Help Support This Website

If you require hotel accommodation in the Weymouth area then first try a hotel booking service provided by Booking.com. They offer all types of accommodation to suit all tastes and pockets from; Budget Hotels, Traditional Bed & Breakfast establishments to Five Star Hotels and Serviced Apartments. Plus their booking system is straightforward and easy to use. Just input the dates below that you wish to stay and then select from the map the hotel of interest to get more information. The map is centered to the football ground. However, you can drag the map around or click on +/- to reveal more hotels in the town centre or further afield.

Map Showing The Location Of The Bob Lucas Stadium In Weymouth

If there is anything that needs to be updated or if you have something to add to the Guide to the Bob Lucas Stadium Weymouth then please email me at: contact@footballgroundguide.com.

Special thanks to Dave Parsons for providing the photos of the Bob Lucas Stadium Weymouth. 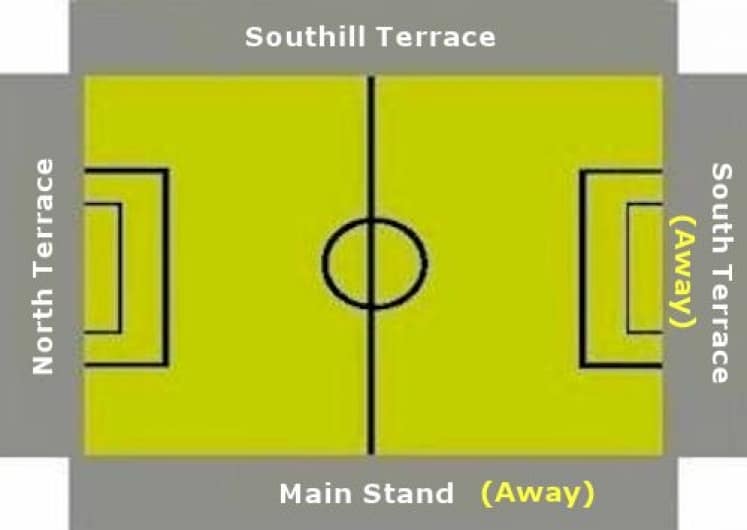