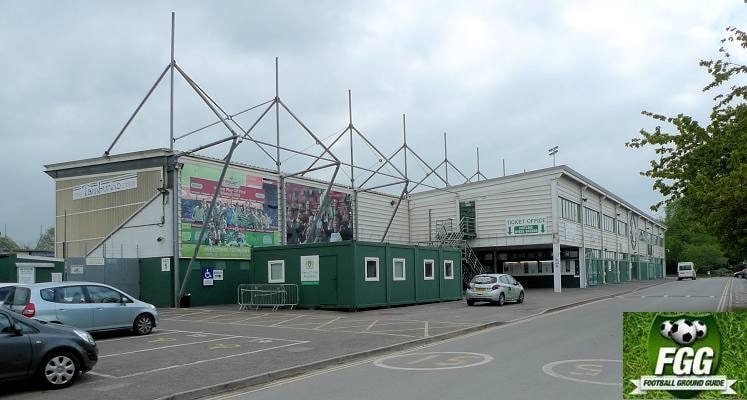 Huish Park is a tidy looking ground located in a pleasant setting, with lots of trees visible behind the stands. Both sides of the ground are similar looking stands and are of the same height. They are both cantilevered, covered single tiered stands that are all seated. Each stand has windshields to either side. The only differences between these stands is that the Tamburino Stand has some executive boxes running across the back of it, plus the dugouts and players tunnel, whilst the Screwfix Community Stand has a press box suspended from beneath its roof and a small simple looking electric scoreboard. At one end is the medium-sized Thatchers Gold Stand Terrace, which is covered and for home supporters and again has windshields to either side. Opposite is the Radio Cabs (Copse Road) Terrace, which is given to away fans. This is smaller and uncovered. Oddly the steelwork is in place at the back of this stand to incorporate more terrace space, but the concrete rows have so far not been added. Perched above the rear of this stand is a large electric scoreboard. The ground is completed with a set of four modern floodlight pylons, one in each corner of the ground.

The Club are investigating the possibility of building a new 3,500 capacity seated stand at the Copse Road End of the stadium. It is believed that this would be dependant on selling some land adjacent to Huish Park for retail development.

Away fans are mostly situated in the Radio Cabs Stand at one end of the ground. This is an uncovered terrace, so hope for a dry day. Up to 1,500 supporters can be housed in this area. Additionally, around 600 seats are allocated to visiting fans in the Screwfix Community Stand, along one side of the pitch, which is covered.

Normally a visit to Huish Park is enjoyable, and the atmosphere good, although the open terrace makes it hard for away fans to really generate some noise. The atmosphere is boosted by a very vocal crowd in the home terrace as well as the presence of a drummer and trumpeter in that end (on my last visit the trumpeter was even imitating an ambulance siren as the trainer ran on to treat an injured player!). If Yeovil score then ‘Glad All Over’ by the Dave Clark Five blasts out around the stadium.

On my last visit, I was five minutes late getting to the game and had missed the kick off. Unbelievably the turnstiles had already closed at the away end. I and a number of other away fans had to run around the ground to try and find and someone who could get us in. We managed this, and I have to say that the stewards were particularly helpful and friendly. I found the large police presence in and around the ground perturbing. In my mind, it was not at a high profile game, so I was somewhat surprised at the amount of local constabulary there.

I was pleasantly surprised to find a large marquee outside of the ground, that had been set up as a makeshift beer tent. There was a large sign outside the marquee which announced that 'Everyone Is Welcome!' Just a pity that wasn't quite correct as any away fans in colours were turned away at the entrance by a couple of burly looking bouncers. Some visiting fans did refer the bouncers to the said sign, but to no avail.

There are a couple of pubs within about 10-15 minutes walk of the ground; ‘The Arrow’ and ‘The Airfield Tavern.’ The latter has the benefit of a handy fish and chip shop located next door called Palmers.

Richard Reardon a visiting Carlisle fan adds; “The Arrow is only 10-15 minutes walk away. The weather was excellent so most of our substantial following sat outside at a number of picnic tables. Both sets of supporters mixed well and there was Sky TV inside.  There was a Police presence outside the pub but it was all very friendly”. Rob Laight a visiting Birmingham City fan informs me; ‘“As we were early for the game we drove to the Arrow and parked in their large car park and then decided to leave our car there during the match. The Arrow is a great pub to visit, very friendly and the home supporters were easy to talk to. The Arrow also serves excellent food at reasonable prices’. Whilst Dave Thornton informs me; “On visiting the Arrow I was delighted to see seven real ale handpumps on the bar. These included five beers from the Marstons range and two Guest ales, which were both supplied from the local Yeovil Brewery".

To find this pub, from the ground car park, walk back up the road past the ground to the top of it and turn right. At the end of this road, turn left onto the main road and after a short distance take the first right. Go straight down this road through the new looking residential area and after about ten minutes of walking, you will see a clearing on your right and just beyond this there are some shops and the Arrow pub in the middle.

Huish Park is located on the very outskirts of Yeovil and is signposted from the A303. Leave the A303 at the Cartgate roundabout and take the A3088 towards Yeovil. Follow the road for around four miles until you reach a roundabout on the outskirts of Yeovil with the Westlands Airfield directly in front of you. Turn left at this roundabout and then continue straight on, crossing a number of roundabouts. As you pass the entrance to an Asda superstore, take the next left for the ground, which can be seen from the road.

There is a fair sized car park at the ground (located behind the away end) which costs £3. However as can be expected, it can take quite sometime after the game has ended to exit. Otherwise, there is plenty of street car parking to be had on the roads leading down to the ground. Tim Porter a visiting Torquay United fan informs me; 'make sure you arrive at the official car park, early in winter as you may end up in the overspill car park, which actually is a field which doesn't drain nearly as well as the pitch!'  Richard Reardon adds; 'Getting away from the ground was a bit of nightmare as there is only one road out of the official car park. It took 35 minutes to travel the half mile to the Preston Road roundabout'. There is also the option of renting a private driveway near in the local area via YourParkingSpace.co.uk.

John Midgley a visiting Huddersfield Town fan adds; 'Bus No.68 runs from both Yeovil Junction & Yeovil Pen Mill stations to the town centre. You can then take the regular First Traveller No.1 service (every 15 minutes), which drops you near the stadium at the Abbey Manor Park Housing Estate. The No.68 connects with the No.1 at the Lloyds TSB Bank, located on the town centre High Street (make sure you catch the No.1 with 'Abbey Manor Park' on the front). Just a few yards away from this changing point is the Mermaid pub which I can recommend for excellent food and beer. Anybody coming in by rail can buy a "Plus Bus" ticket with their rail ticket for an additional £2.80 which is valid on both the 68 and 1 services'. For bus timetables see the First Group website.

* The ticket prices quoted above are for tickets purchased prior to matchday. Tickets bought on the day of the game can cost up to £2 more. A £1 discount on these prices can be gained if tickets are bought online (excludes Away, Under 16's, Under 23's and Community Stand centre block tickets).

The nearest league club is Bournemouth, whilst there is also a rivalry with both the Bristol Clubs.

Yeovil Hotels - Find and Book Yours And Help Support This Website

If you require hotel accommodation in Yeovil then first try a hotel booking service provided by Booking.com. They offer all types of accommodation to suit all tastes and pockets from; Budget Hotels, Traditional Bed & Breakfast establishments to Five Star Hotels and Serviced Apartments. Plus their booking system is straightforward and easy to use. Yes this site will earn a small commission if you book through them, but it will help towards the running costs of keeping this Guide going.