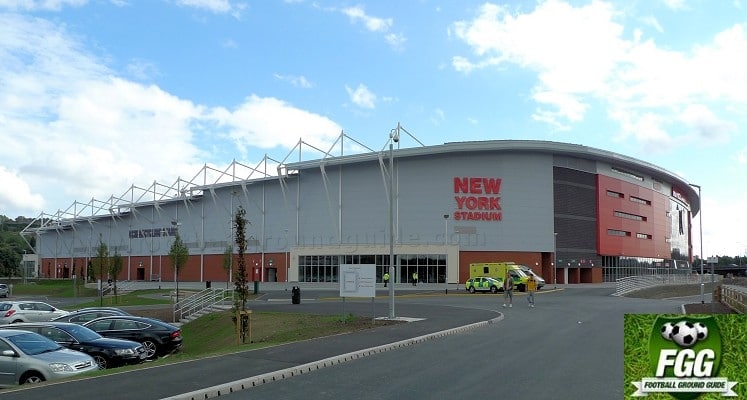 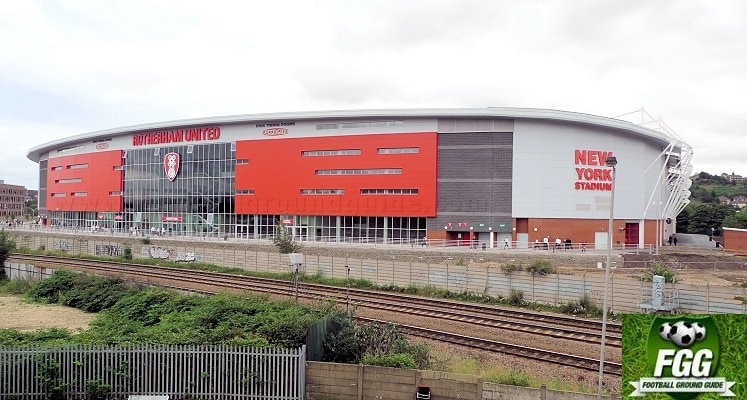 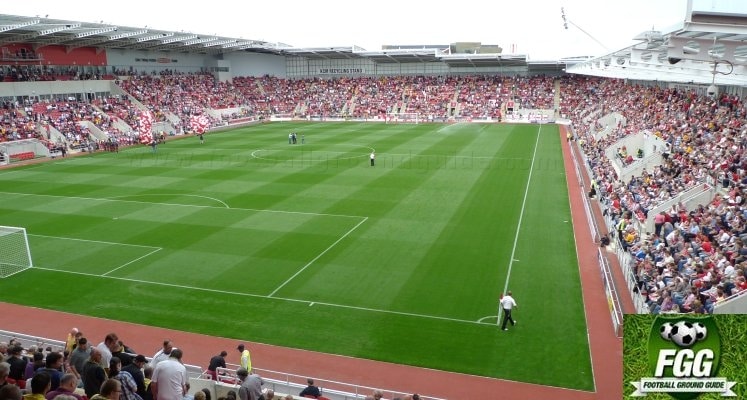 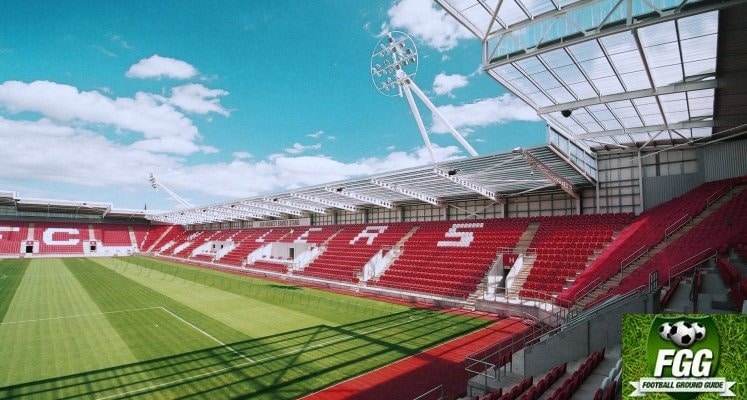 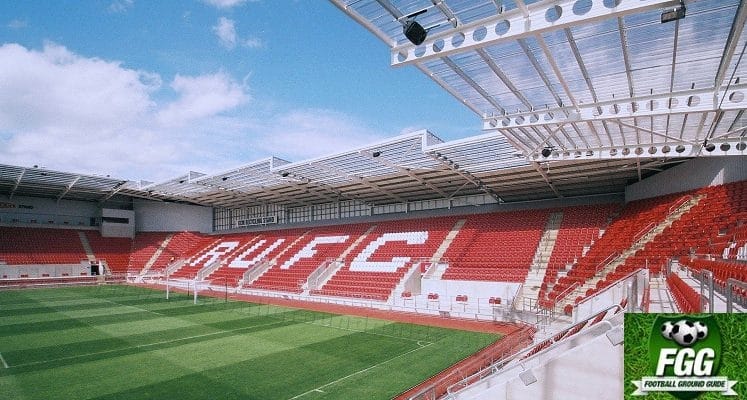 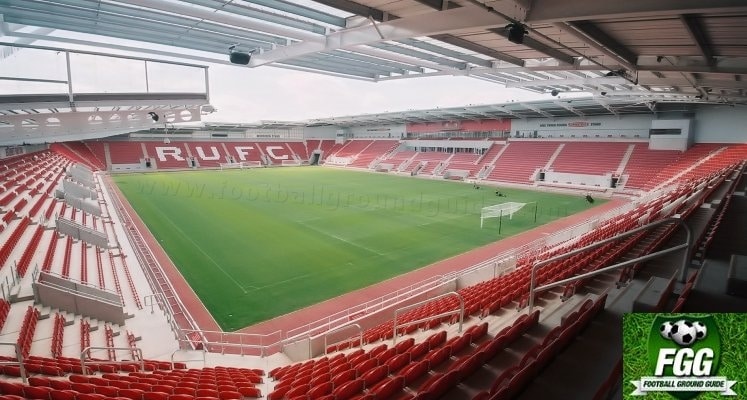 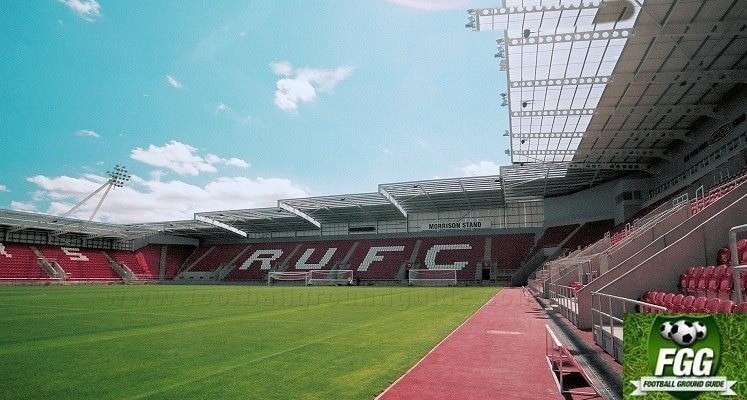 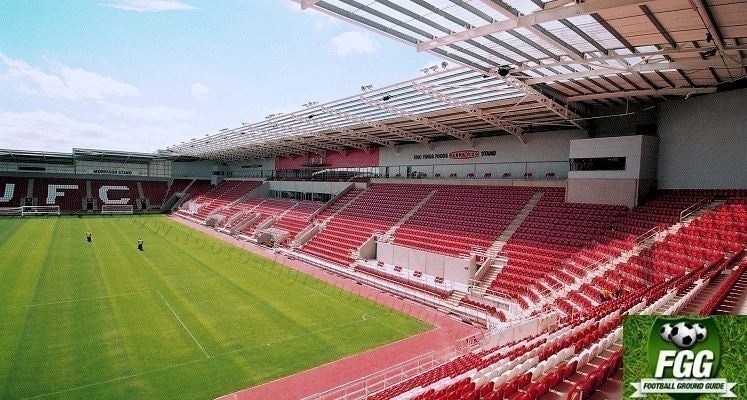 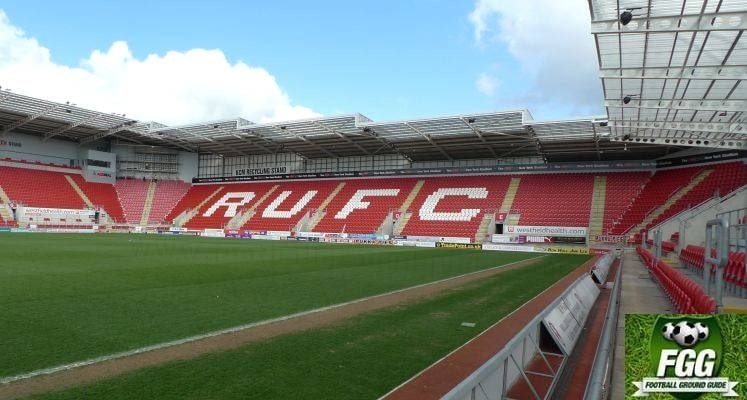 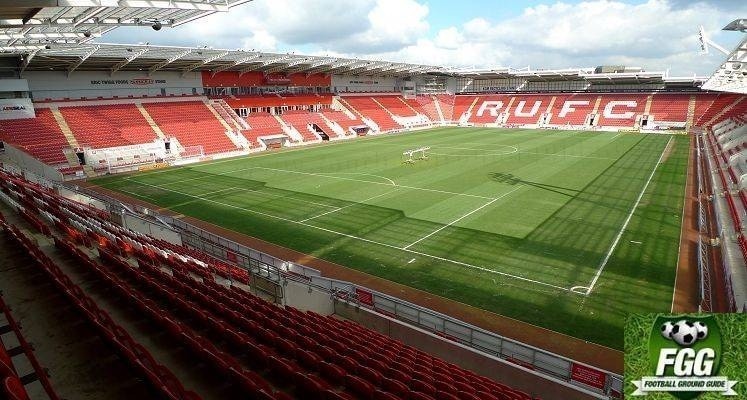 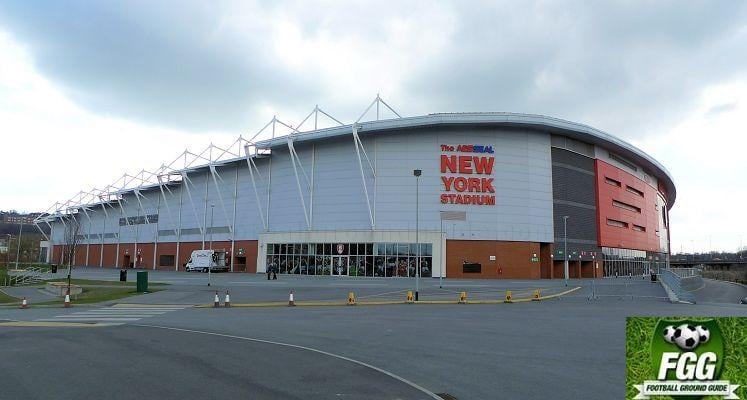 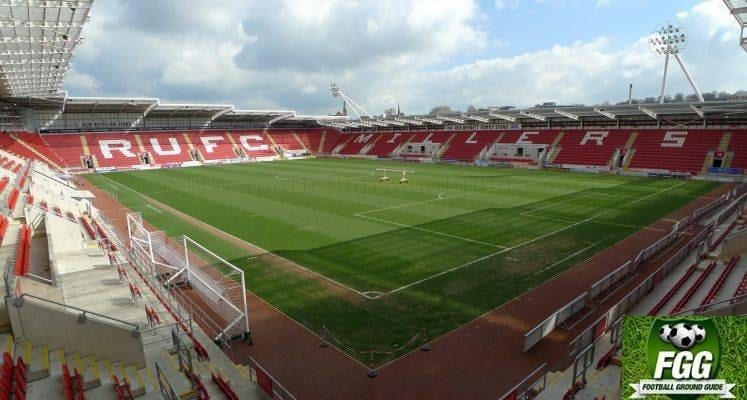 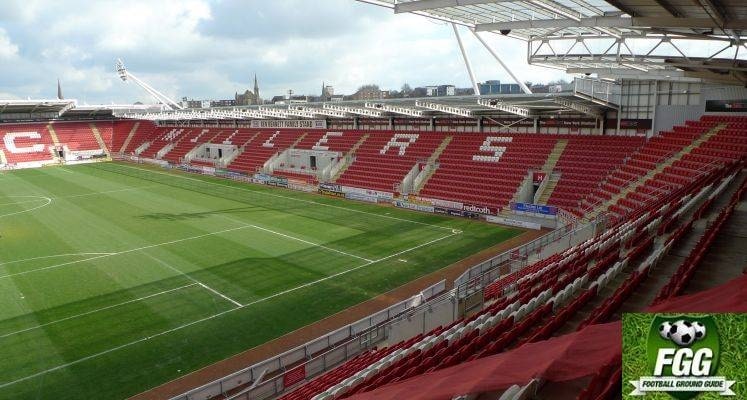 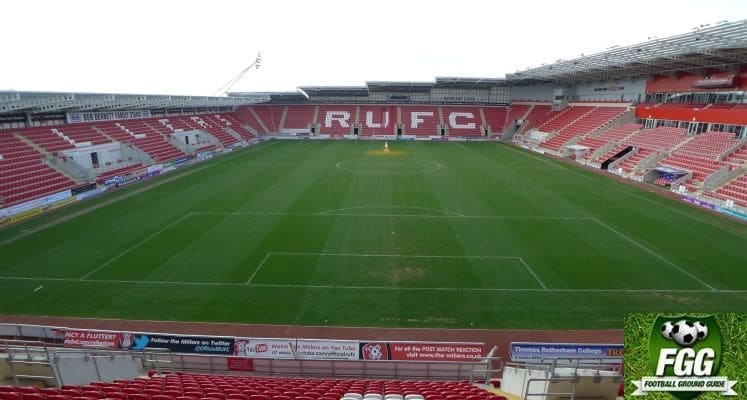 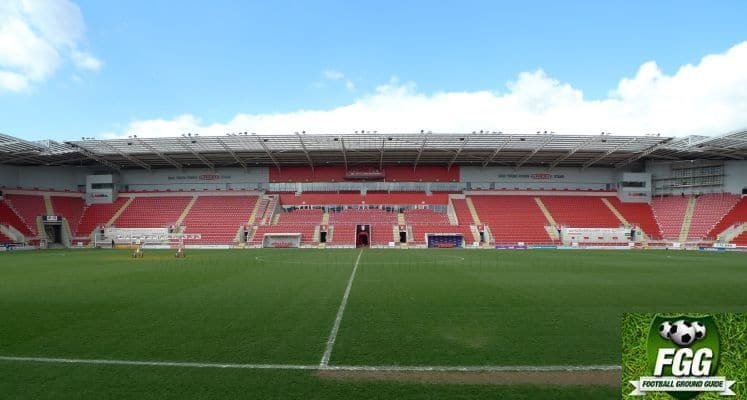 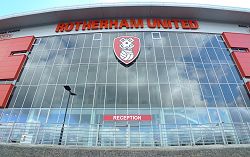 The New York Stadium was opened in 2012 and is located not far away from their old  Millmoor ground where they played for 101 years. The area of Rotherham where the ground is located is historically known as New York (hence the stadium name) and is built on the site of the old Guest & Chrimes factory. Set beside the River Don, the stadium from the outside looks far larger than its 12,000 capacity and is quite striking in its design. It is totally enclosed and all seated.

On one side is the Eric Twigg Foods Pukka Pies (West) Stand. This is the largest of the four single tiered stands. It is unusual in so much that the middle seated area of the stand is situated at a lower level than either of the wings. There is an executive area above this with seating outside and yet further above is a television gantry, set into the red paneled wall. The other sides of the stadium are much smaller in size. Both ends are virtually identical, except that the Mears (South) Stand has a small electric scoreboard situated at the back of it. On the remaining side is the Ben Bennett (East) Stand, which is slightly less tall than both the ends. This simple looking stand has two large areas built into the front of the stand for the use of disabled supporters. There is a large video screen situated in the North West corner.

The most interesting feature inside the stadium is the roof. This descends down from the West Stand over the ends is large ‘steps’ eventually meeting the East Stand. A large amount of transparent perspex has been used in the roof to allow more light to reach the playing surface and improve their overall look. On the roof of the East Stand are two futuristic-looking floodlight pylons that are supplemented by a row of lights above the West Stand.

In November 2014 the stadium was renamed the AESSEAL New York Stadium in a five-year corporate sponsorship deal.

The stadium has been built in such a way and the necessary foundations have been put in place to further expand the stadium capacity to 20,000. This would be achieved by adding an additional tier to the North, South and East Stands. This may be done in phases; a first to 16,000 and then a second phase to 20,000. 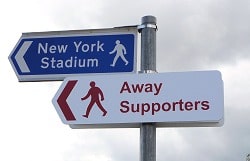 Away fans are normally housed in the Mears Stand at one end of the stadium, where around 2,500 supporters can be accommodated. If only a small away following is expected then part of the Ben Bennett Stand (towards the Mears South Stand) is allocated instead. The stadium has electronic turnstiles meaning that you have to insert your ticket into a reader to gain admission. Cash is not accepted at the turnstiles and tickets for the away section can be purchased from the dedicated away ticket office at the back of the Morrison Stand.

As you would expect from a new stadium the facilities and views of the playing action are generally good. The angle of the Mears Stand is quite steep, meaning that it is a bit of a hike to get to the top. If you are a little unsteady on your feet then you may wish to consider getting a seat on one of the lower rows, as there are no handrails to hold onto. On the concourse, the food and drink available includes; a range of Pukka Pies (Chicken Balti, Meat & Potato, Steak & Kidney, Cheese & Onion, all £3.40), Sausage Rolls (£2.90), Hot Dogs (£4) and Cheeseburgers (£4). These are available from two refreshment kiosks on the concourse. I noticed that most fans tended to head to the kiosk closest to the entrance turnstiles, resulting in queues at this outlet whilst the other had few or no customers.

The stewards were generally laid back and friendly and I thought it was a nice touch that smokers were allowed to go outside the stadium for a cigarette at half time. There is also a large television screen on the concourse showing Sky Sports. My only real criticism was that I could hardly make out a single word that the stadium announcer said and that the bottom of my pie was burnt! Plus there didn’t seem that there were any barriers in place at the front of the away section to prevent away fans entering the home sections. I know that this is normally not a worry but in a more highly charged game….

Unlike most new stadiums which are situated way out of town in the middle of nowhere, the New York Stadium is located close to the town centre. This not only means good transport links but also a fair choice of eating and drinking outlets. 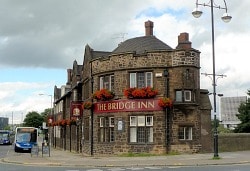 The main pub for away fans is the Bridge Inn, which is located quite close to Rotherham Railway Station (turn right out of the station and the pub is across the road on the left). Although basic inside, it does the job and normally has real ale on tap.

There are also a number of pubs in the nearby town centre, which are only a few minutes walk from the stadium. These include two Wetherspoon pubs; the Bluecoat on the Crofts and the Rhinoceros on Bridgegate. The Bluecoat does have more of a home feel about it, whilst closer to the railway station is the Rhinoceros. The Bluecoat is also listed in the CAMRA Good Beer Guide. Neil Calver a visiting Ipswich Town fan informs me; ‘We went to the Rhinoceros, a Wetherspoons, which was friendly and had a nice mix of home and away fans inside.’

Colin Hall a visiting Leicester City fan adds; ‘We discovered the Cutlers Arms on Westgate (turn right off the Main Street), which turned out to be a most welcoming and hospitable tavern. It had a mixture of home and away fans and sold beers from the local Chantry’s brewery’. Also nearby along Westgate is the New York Tavern, which also serves Chantry’s beers. This pub is also listed in the CAMRA Good Beer Guide.

If travelling by train and changing at Sheffield station, then on the station itself (Platform 1) is the Sheffield Tap which serves real ales and is run by the Thornbridge Brewery (please note though that no football colours are allowed).

Leave the M1 at Junction 34 and take the A6178 towards Rotherham. At the third roundabout called Ickles Roundabout take the first exit onto the A630 Centenary Way (signposted Doncaster), you will see the stadium on your right. You will pass the floodlights of the old Millmoor Ground on your left and just after the traffic lights for the Masbrough turn off, take the right hand filter lane, to turn back on yourself along the dual carriageway. At the traffic lights take the left hand filter lane to turn left onto Main Street and the entrance to the stadium is down on the right.

Leave the M1 at Junction 33 and take the A630 towards Rotherham. After around two miles and crossing over three roundabouts you will reach the stadium on your right. You will pass the floodlights of the old Millmoor Ground on your left and just after the traffic lights for the Masbrough turn off, take the right hand filter lane, to turn back on yourself along the dual carriageway. At the traffic lights take the left hand filter lane to turn left onto Main Street and the entrance to the stadium is down on the right.

Car parking at the stadium is for permit holders only. There is an open air car park on matchdays on the corner of Main Street with the A630 dual carriageway that you will pass if you follow the directions above that costs £2. Also there are a number of pay & display car parks located around the town centre. Otherwise, there is some street parking available around the area of the old Millmoor ground, which is around a 15 minute walk away from the visitors turnstiles. There is a multi-storey car park located next to the Interchange Bus Station which costs £2.80 for four hours, or other council Pay and Display car parks in the area costing around £2 for four hours. There is also the option of renting a private driveway near in the local area via YourParkingSpace.co.uk.

The prices below are for tickets purchased in advance of matchday. Tickets bought on the day of the game can cost up to £2 more per ticket.

Concessions apply to Over 60’s, Students, Members of the Armed Forces and the Disabled.

Rotherham vs Doncaster rivalry: There are just 18 miles between these two sides and that brings a serious amount of passion to matchday when they face off. It’s arguably the fiercest derby in South Yorkshire.

Rotherham vs Sheffield Wednesday rivalry: Although there is less than 10 miles between these sides, the fact Sheffield is a two team city means Rotherham don’t get the same attention. Despite that, there is a fair bit of name calling with Rotherham dubbed ‘Toy Town’ and Wednesday referred to as ‘Pigs’. The fact both are big clubs in League One right now adds something too.

Rotherham vs Barnsley rivalry: Nowadays, this rivalry is more a bit of fun for most with game days still bringing more atmosphere to the stadiums than an ordinary fixture. Back in the 70s and 80s though it wasn’t fun; it was ferocious.