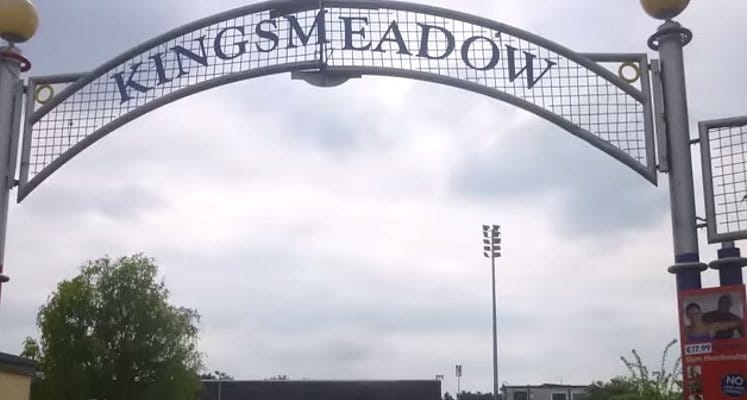 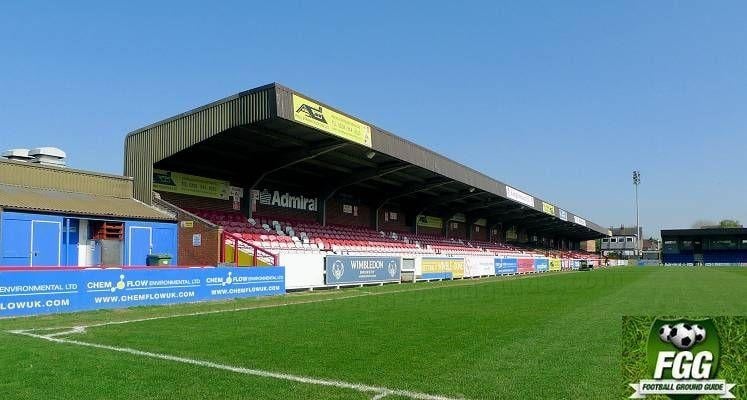 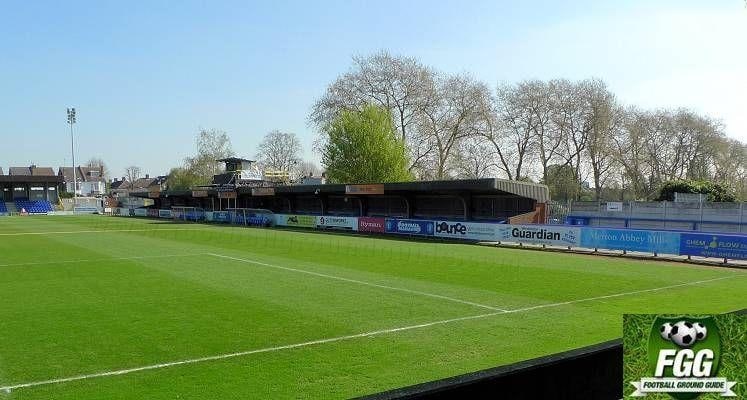 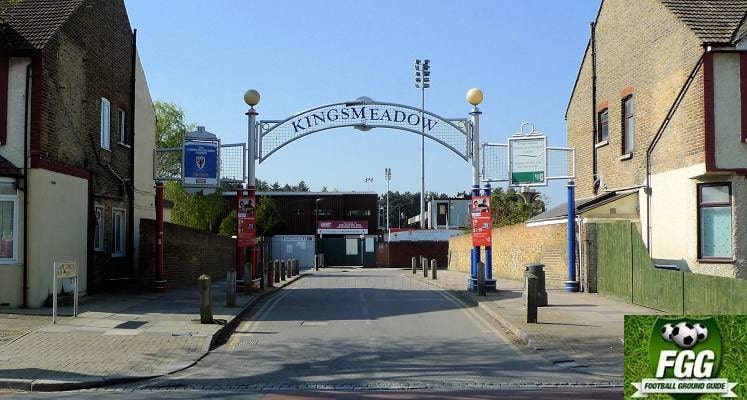 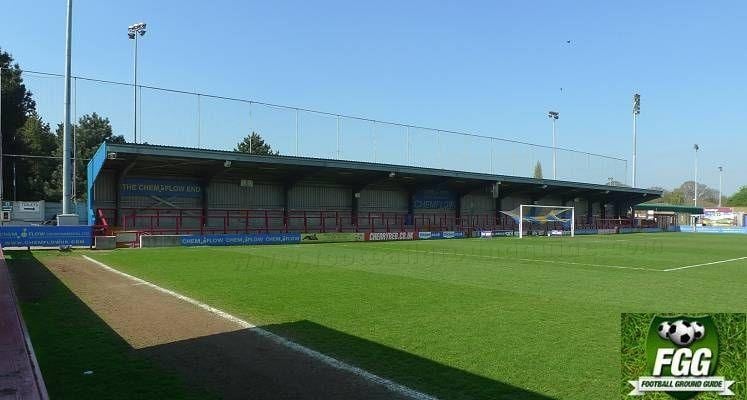 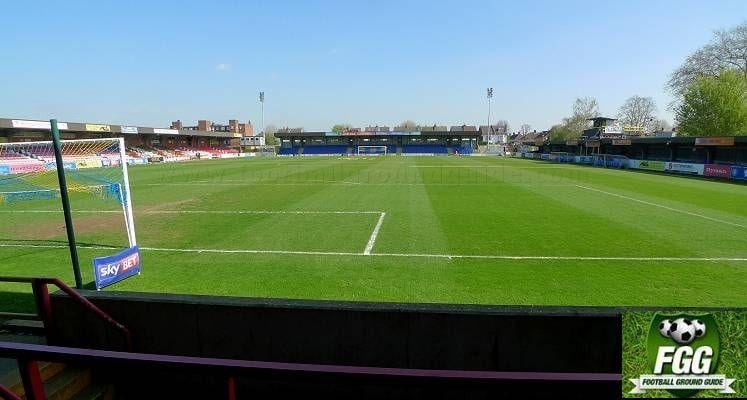 The Cherry Red Records Stadium as it is called in a corporate sponsorship deal (it was originally named the Kingsmeadow Stadium) is a small but tidy ground, that is almost hidden behind neighbouring residential houses on Kingston Road. It has seen some investment in recent years since AFC Wimbledon took over the lease from Kingstonian FC. On one side is the Paul Strank Stand. This covered, all seated Main Stand looks fairly modern, having recently been extended. It accommodates 1,265 spectators and although only eight rows high, it is free of supporting pillars, resulting in uninterrupted views of the pitch. Surprisingly the team dugouts are not located in front of this Main Stand, but opposite in front of the Rygas Stand, which leads to a procession of players and club officials, at half and at full time. This terrace is partly covered to the rear and has open flanks to either side.

At one end is the Chemflow Terrace (aka the Athletics End, from the Athletics Stadium that sits behind), where the majority of the home supporters stand. This modern looking covered terrace is located quite close to the edge of the playing area, giving a reasonable view of the game. Opposite is the John Green Stand (Kingston Road End). This smart looking stand was opened in September 2012. It is covered having a raised roof and has an all seated capacity of 1,000. In addition, the stadium has a set of four rather plain looking floodlights. The Club have commenced with the building of their new stadium on the site of the former Wimbledon Greyhound Stadium. The site is close to their former Plough Lane home. It is expected that the new stadium will take 14 months to complete and therefore should be open for the start of the 2020/21 season. The new ground will have an initial capacity of 9,000 seats but will be built in such a way that it can be easily expanded to 20,000 at a later date.

In a separate move the present Kingsmeadow ground which is owned by AFC Wimbledon has been sold to Chelsea FC, who will use it for youth and Chelsea Ladies games. Sadly Kingstonian FC who originally opened the Kingsmeadow Ground, have now left and are groundsharing with Corinthian Casuals FC, who play at King George’s Field, Tolworth.

Away fans are mostly housed on one side of the RyGas Stand at one side of the pitch. This small shallow terrace is partly covered to the rear and can accommodate up to 725 visiting fans. It is shared with home supporters. Away fans are located towards the John Green Stand side of the terrace and are adequately separated from the home fans. There is also a small flat standing area beside the stand which also leads to the refreshment area and toilets. In addition, approximately 94 seats are made available in the John Green Stand, which is a relatively new covered stand. Turnstiles open 90 minutes before kick off.

Please note that the away terrace and seating areas are not accessible by going through the main entrance to the stadium car park. Away fans should instead continue going a short way along Kingston Road (keeping the main entrance on the right) and take the next right at the railings in-between the terraced houses (opposite King Henry’s Road) to go down to the away supporters turnstiles. Outside the stadium near the main entrance is a handy chip shop whilst a bit further along is the amusingly named ‘Fat Boys Cafe’. I also noticed outside the Main Stand a vendor (Terry’s Badges) displaying and selling the largest array of different football badges, that I think I have ever seen!

There are two large bars located inside the main Paul Strank Stand. Away supporters are generally welcome to frequent the bars, however for the bigger games, and/or when it is all ticket, the bars are reserved for home fans only. On my visit, I felt that the inside of the bar that I frequented, was a bit dim and drab looking, but with a real ale on offer from a local brewery and a barbecue selling burgers and hot dogs outside, its plus points outweighed the negative ones!

Terry Morton a visiting Bristol Rovers fan informs me; ‘I found a small pub called the Bricklayers Arms on Hawks Road, which is around a ten minute walk away from the stadium. They had real ale and showed televised football. There was a nice of mix of home and away fans present on my visit.’ To find this pub, then with the entrance to the Kingsmeadow Stadium behind you, turn left along Kingston Road which becomes Cambridge Road. Where the road forks, bear left (signposted Surbiton) into Hawks Road and the pub is down on the right.

Otherwise, there is not much near to the ground, with a number of pubs closing in recent years. You could drink in Kingston or New Malden town centres and then get a bus to the ground (or a long walk!). The 131 bus passes the ground and goes through both town centres. If in Kingston, catch a bus heading to Tooting Broadway; if in New Malden, catch a bus heading to Kingston. On New Malden High Street there is a Wetherspoons outlet called the Watchman, whilst near the station, there is Bar Malden. See the London Bus Routes website for timetable details.

If you have a bit of time on your hands, like real ale, or perhaps travelling in via Kingston Railway Station. Then on Willoughby Road is the Willoughby Arms which normally has seven real ales on tap.

From Outside London
Leave the M25 at Junction 10 and take the A3 towards London. Follow the A3 for around 11 miles and at the exit for New Malden/Worcester Park, turn off and take the left turn into Malden Road (A2043) towards Kingston. Follow this to the next roundabout. Take the left filter lane and the first exit into Kingston Road (A2043 still) and Kingsmeadow Stadium is one mile on the left (not far past the Homebase Design Centre that you will pass on your right).

From Central London
Take the A3 out of London, exiting at New Malden/Worcester Park. Cross over the A3, and take the Malden Road (A2043) towards Kingston. Follow this to the next roundabout. Take the first exit into Kingston Road (A2043 still) and Kingsmeadow is one mile on the left.

There are 350 car parking spaces at the ground which are free. However, as you would expect it fills up pretty quickly. For Saturday games, to be in with a chance of securing a space you need to arrive before 1.30 pm at the latest. Otherwise street parking. There is also the option of renting a private driveway in the local area  via: YourParkingSpace.co.uk.

The nearest railway station to the ground is Norbiton, which is about a 15 minute walk away. The station is served by trains from London Waterloo via Clapham Junction and Wimbledon.

Leave the station via the back exit (Westbound platform), and take the first left onto Norbiton Avenue. At the end of the avenue, turn right Gloucester Road, and at the end of Gloucester Road turn left into  Cambridge Road. The main entrance to Kingsmeadow is 400 yards down on the right, with the away entrance a little further on past this on the right-hand side and is well sign posted. Thanks to John Woodruff for providing the directions.

Dave Nathan adds; ‘New Malden station is also in walking distance of the ground. This may be a preferred route for away fans as there are better pubs in New Malden namely Bar Malden and the Glasshouse both outside New Malden station and The Fountain at the Fountain Roundabout. Come out of New Malden station and follow the High Street to the left, and proceed up to the Fountain Roundabout. At the roundabout turn right into Kingston Road towards Kingston (or jump on a 131 bus) and the ground is a good mile on the left after passing under the railway bridge and Homebase on your right. This will take about 25 minutes to walk’.

Find and Book your London or Surrey Hotel and help support this website.

If you require hotel accommodation in Surrey or Central London then first try a hotel booking service provided by Booking.com. They offer all types of accommodation to suit all tastes and pockets from; Budget Hotels, Traditional Bed & Breakfast establishments to Five Star Hotels and Serviced Apartments. Plus their booking system is straightforward and easy to use. Just input the dates below that you wish to stay and then select from the map the hotel of interest to get more information. The map is centered to the football ground. However, you can drag the map around or click on +/- to reveal more hotels in Central London or further afield.

Concessions are available to full-time students, over 65’s and the unemployed on production of proof of status. Due to the large number of season ticket sales for the Main Stand, match tickets for this area will be very limited. 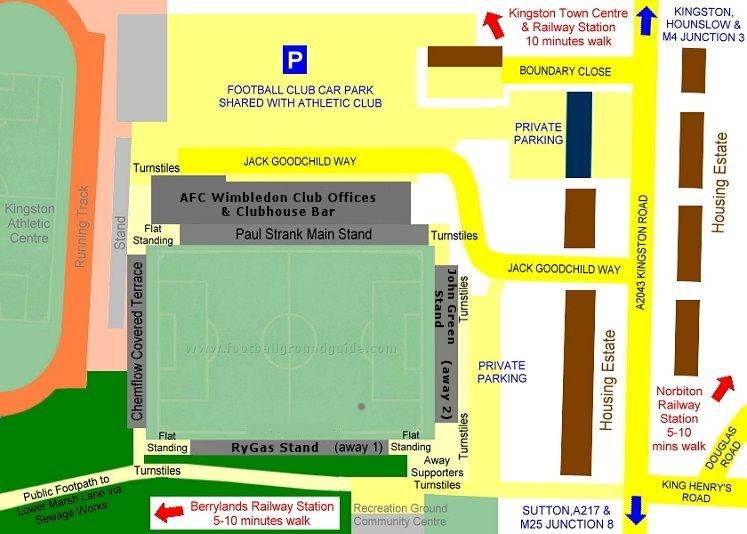