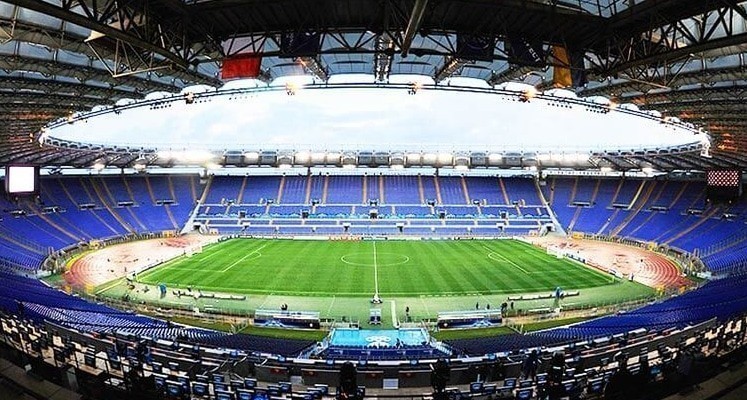 The Stadio Olimpico is an iconic ground that is located in Rome. It is a ground shared by two Italian Serie A rivals – AS Roma and Lazio. This ground also happens to be the largest facility for sporting activities in Rome. The ground opened its doors in 1937 for Roma and Lazio even though it became functional more than a decade earlier. Just like all other top European stadiums, Stadio Olimpico goes with a bowl approach and continuous seating. As a result, fans will not be able to experience the stadium be split up into different sections on a visible scale. Once again, the stadium looks to have a single tier seating that is quite different from other grounds. For the record, though, Stadio Olimpico is split up into four sections:

Curva Nord – This is a section of the ground that has a larger screen and it is located in the northern part. During the Lazio matches, this section is occupied by the passionate and hard-core Lazio supporters.

Curva Sud – This is the southern section of the Stadio Olimpico and it is occupied by the Roma supporters. One can expect a lot of excitement, passion, noise, and atmosphere in this section.

Tribuna Ovest – This is the section of the ground with all the key elements like the director’s box and dugouts. For this purpose, it is also considered as the main stand of the ground.

It is very common for new visitors to be overwhelmed by the history of the Stadio Olimpico.

As the capital city of Italy, Rome is a great destination for finding plenty of watering holes. There are also plenty of must-try restaurants and pubs. Some of the top options would be:

This is a great place for those who are not very concerned about watching live sports at a bar. Instead, this is a great choice for spending a day where it is even possible to meet a celebrity or two. This is a destination that is frequented by the likes of Frank Sinatra, while it has also been visited a lot by Anthony Hopkins and Hillary Clinton amongst others. Naturally, such a place manages to attract celebrities due to its high-quality food and top-notch alcohol options.

This is an Irish pub with an old-world charm. It specialises in all the major sporting events that you might expect to watch. Furthermore, there are also many Scottish items on the menu like beer and those interested in grabbing a bite will be treated to plenty of excellent pizzas and burgers.

For those interested in getting a piece of Rome’s atmosphere along with the ability to watch a ton of sporting action, Abbey Theatre Irish Pub is a great option. It is possible to get a load of drinks that are popular in England, while watching live sport is also a lot more fun thanks to the presence of several screens. Of course, you get to enjoy a lot of food on the menu.

Immediately after entering into the Stadio Olimpico, fans will be treated to a view where the track goes around the pitch despite the ground being used to host football and rugby games. Irrespective of where you are located on the ground, the atmosphere would be one of the best in Italian football stadiums. The ultras of Roma are able to provide a remarkable atmosphere while occupying the Curva Sud. A visiting supporter should be fine as long as they are not a supporter of Lazio sitting in this section of the ground.

In terms of convenience and features, the Stadio Olimpico is a relatively old stadium that does not live up to modern expectations. The relatively less number of options for eating or drinking – before and after the game – at the Foro Italico complex should not come as a surprise. However, there are a number of options for getting a pizza, espresso, or gelato just opposite to the river that runs nearby. It is possible to skip public transport or any driving stress by deciding to stay close to the Stadio Olimpico. There are plenty of options to stay at different price ranges. You will be able to find hotel rooms that charge from €75 to even €125 per night while offering a comfortable stay.

The north-east of the stadium tends to have more luxurious options, while the hotels in the south of the stadium do not have many bed and breakfast options.

There are numerous travel options available for someone who is trying to get to the Stadio Olimpico. As the capital of Italy, it is not a surprise that Rome happens to possess excellent road networks and public transport network. If you are taking a car to the ground, the best route would be to use the A1 motorway to Florence. However, you need to take the Exit Number 5. One has to follow the signs to reach the stadium.

It is possible to take a taxi from various parts of Rome as the capital city is well covered with this option. The cost of a taxi ride will depend on the time and distance. For example, a ride from the terminus to the stadium will be around €15 and the journey time will be around 20 minutes. Once at the stadium, fans will be able to experience a reasonable degree of ease when it comes to parking the car, as there are several private parking areas located close to the ground. Still, the number of parking spots available at the Stadio Olimpico can only be described as inadequate – especially for the ground that is located out of city centre limits.

The train journey to Rome can be quite scenic since it is likely to be crossing the Swiss Alps. The important connection for fans heading from London would be the Gare du Nord station in Paris. From here, there has to be a change in stations to the Gare de Lyon so that you can get to Turin. Once you reach Turin, you cannot get another train to Rome. The whole journey will take almost a day. If you are taking the train to Rome, you would reach Stazione di Roma Termini, which is the primary station in the city. It happens to be just 6 km away from the ground. After reaching Stazione di Roma Termini, you could comfortably take a metro line B. This can be done by heading to the Tiburtina station and changing over at the Termini. Incidentally, the same shift can be done at the Station Ostiense.

If you decide to skip the metro and take the bus, the key number to watch out would be bus 32, which runs between Ottaviano and Piazzale della Farnesina. Rome happens to be famous for the tram services and it can also be used to reach the stadium, as tram number 2 will be the perfect choice. Incidentally, the train services can be a great option even if you are heading to Rome by air.

One has to be warned that the city’s primary airport – Leonardo da Vinci-Fiumicino Airport – is quite far away from the city centre. In fact, this airport is around 40 km away from the ground. A closer option to the city centre would be the Ciampino – G.B. Pastine International Airport, which is 16 km away. Even then, it can be regarded as a considerable distance for someone who is travelling from London. Despite being closer, Ciampino – G.B. Pastine International Airport is not exactly convenient for travel.

The prices of a ticket charged by Roma differ based on the competition. For games against big teams like Inter Milan, AC Milan, and Juventus, one can expect to pay top dollar. On average, the price of tickets would be around €30 but it can even jump to €40 in the case of a big match. The prices especially go up for the Rome derby against Lazio, who are one of the fiercest competitors for the club.

Depending on the seat selection, the prices can even hit €200. This is due to the availability of several luxurious seating options in the Stadio Olimpico. For example, fans will be able to opt for the suite, which comes with its own lounge and seating that is very high regular seats. There are also other premium corporate packages that are less expensive than suites, but they would feel less luxurious. The prices for a concessional category – like those above 65 years of age – will be around 50% of the full price ticket.

It can be quite difficult to get tickets at the stadium. The best bet for gaining access to a Roma match at the Stadio Olimpico will be to go online. The official site will be able to provide information about the same in detail. There are also betting shops and other affiliate points which provide access to AS Roma tickets.

One of the biggest surprises and unique elements of the Stadio Olimpico is the complete lack of a stadium tour – not even on days when there are no games. It is possible to visit a ground when there are no matches, but there is little else to do apart from having a look around the complex. It is unlikely that tours will be introduced in the future. As a result, a fan will not be able to experience sections of the Stadio Olimpico that are not usually seen by the general public. It would include the press rooms, tunnels, changing rooms, dugouts, and more.

There is a decent level of support for disabled fans at the Stadio Olimpico. As one of the older stadiums in Europe, it is not a surprise that Stadio Olimpico does not have the reach of disabled facilities available at a modern stadium. Still, fans will be able to access around 160 wheels user spaces in the Tribuna Tevere Disabili, while the Tribuna Monte Mario has around 40 wheelchair spaces for the supporters. There are also low-level counters and accessible toilets that are placed in these sections of the ground.

AS Roma Fixture List (redirects you to the BBC site)

Be the first to leave a review of Stadio Olimpico (Rome)!